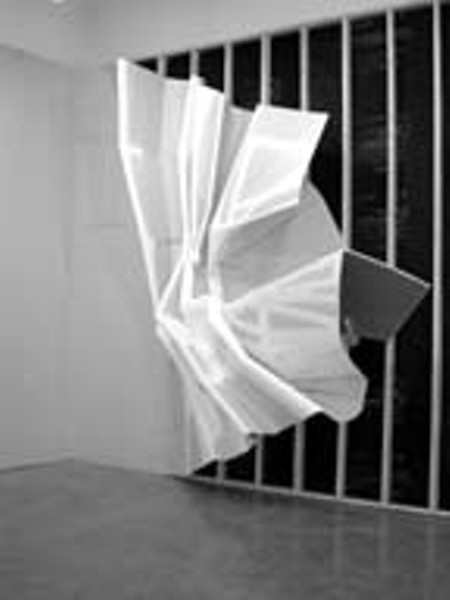 For the second round, Kate Hudnall took over the same space, but in contrast, staged the room as an all-out, floor-to-ceiling woodworker's dream, complete with workbench, a wooden floor littered with shavings, and eccentrically crafted toys, furniture and other objects fitted with wooden wheels. Where Mulligan's minimal moves challenged viewers to imagine the action that takes place in his room, Hudnall provided a specific set where the activity taking place inside is imaginable and the creator (a hyperactive inventor from another time and place?) becomes the curiosity.

In the most dramatic takeover of space, Tim DeVoe built "Yield and Fracture," a stud wall 22 feet long and 13 1/2 feet tall. Having constructed it with 2 x 4's and bare gypsum board, DeVoe turned common construction materials into a deconstructive tour de force. As if a mighty finger pulled at it, the gypsum board was peeled back from a bottom corner and frozen into a large wrinkled mass to expose fiberboard sheathing beneath. Rigid board became a plastic sculpting medium. It was twisted and folded as if it were thin paper.

At its simplest level, the sheer ambition involved in producing such a spectacle was remarkable. Then there was DeVoe's dismantling of what is expected from banal materials, especially at such a large scale. Truly, the wow factor counts, but "Yield and Fracture" was, above all, an elegant and poetic gesture of a language rearranged. — P.R.P.