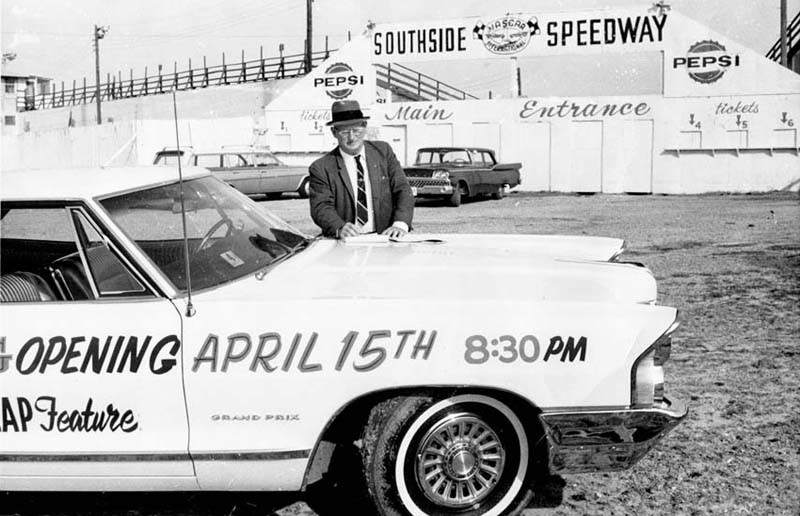 SIXTY YEARS LATER, they still do. On Friday, Aug. 19, there are seven races, featuring everything from demolition-bound street cars to high-powered, open-wheel modified cars, which thunder around the high-banked turns at nearly 90 mph.

Jack "Crackerjack" Baldwin, 76, raced at Southside for almost 30 years before hanging it up in 1984, when he won the track championship. He's still here, helping his friend, Woody Ellington, who drives the No. 11 car in the Grand Stock division.

A retired truck driver, Ellington, 68, started racing seven years ago, plopping down $4,000 for the car after toying with the idea for years. It's expensive — in his first year, he spent a total of $10,000 — and he drives namely for kicks. "I got second one time," he says, beaming. He's in seventh place in points in the Grand Stock division, but is steadily getting better. And his wife doesn't mind his dangerous hobby. "She usually buys my first set of tires for me before the season starts," he says.

As do almost all of the drivers, he refers to Clements and the track's staff as family. Jennifer Altizer-Mullis, Southside's general manager and Clements' daughter, says when Ellington started racing she prayed for his car to break down. She worried he would get seriously injured. In his first year, Ellington flipped his car on the last lap of the last race. He wasn't hurt, he says, except for his feelings. 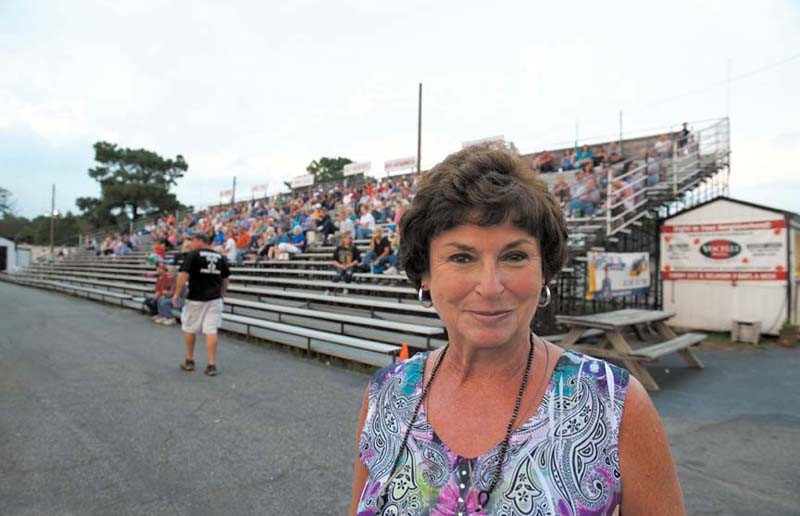 "His goal was to be the oldest rookie ever," Altizer-Mullis says. "He asked me to stop praying for his car to break."

The track also is chock full of NASCAR hopefuls, including J.D. Eversole, a 17-year-old rising senior in the Governor's Academy for Engineering Studies at L.C. Bird High School, who races in the same division with Ellington. His father used to race, as did his mother, and after cutting his teeth on go-carts, Eversole began racing stock cars at Southside a year ago. He wants to "follow in Ryan Newman's footsteps," his father says.

Newman, from South Bend, Ind., started racing midget cars at age 15 in 1993, moving on to NASCAR where he's won 15 races in the Sprint Cup series since 2000. But Eversole's career path, so far, sounds more like Denny Hamlin's, one of NASCAR's stars who got his start at Southside. Like Hamlin, Eversole was named rookie of the year in his first season.

While Eversole is following a family tradition, others are creating their own. Lauren Edgerton, 21, started racing go-karts six years ago, and quickly moved on to the entry-level U-Car division in 2007. U-Car stands for "You can afford racing," and the cars are limited to four cylinders. In 2010 she raced at the Shenandoah Speedway in Elkton, and won the track championship and driver of the year honors. 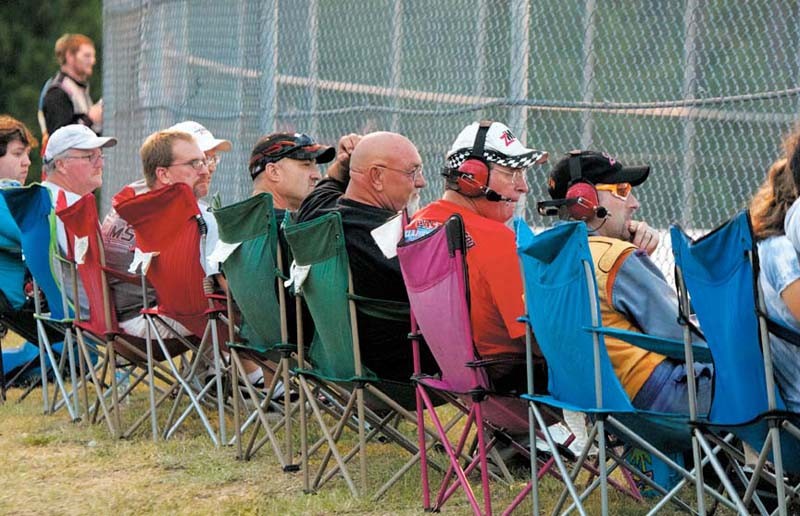 This year she returned to Southside Speedway in a bigger, faster, modified car after earning a degree from Virginia Commonwealth University in mechanical engineering. Jumping from the slower U-Cars to modified hasn't been easy. On this Friday night she comes in eighth in the first race, and seventh in the second (both are 10-car fields). In both races, she gets lapped by the winner in the final circuits.

She blames her addiction on her father, Rusty, who tried his hand racing go-carts in Amelia County and urged Lauren to give it a shot. "We didn't have any clue," Rusty says of his daughter's unexpected talent. "To this day, you push her down the hill on a bicycle and she'll scream like you're killing her."

The rewards are small. Winning drivers receive anywhere from $300 to $1,000, depending on the division. Others are here for the pure joy of racing, and have no ambitions of making it to the big time. Chris Kantzler, 55, thin and mustachioed, started racing a few years ago on a whim. A salesman for Orkin Pest Control who lives in Amelia, Kantzler may drive the ugliest car at Southside, a brown mangled heap (half Firebird, half Camaro, he says) that he bought off "another knuckle brain" for $800.

"We never win. We never put the money into the car," he says, smiling. "It's a lot of fun." Mike Ganoe, a burly, 46-year-old mechanic from Louisa County, has won almost all of the street car races this year — as he does most years — but has no plan to move up to the next level. It's too expensive, he says. He wins so much that Altizer-Mullis says the speedway started penalizing him for winning this year, forcing him to drop 50-pound weights into his Camaro every time he won. Tonight he's driving with an extra 300 pounds, and comes in second. 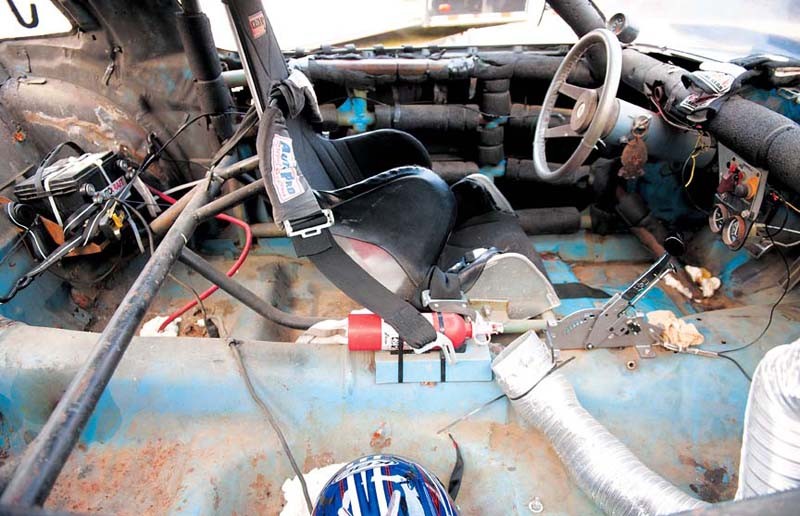 White-and-red placards ring the upper lip of the aluminum grandstands with the names of local racing legends — Sonny Hutchins, Tommy Ellis, Runt Harris. Some of the cars are so smashed up they don't appear to be drivable, much less ready for the rigors of the "Toughest Short Track in the South."

For a late summer night, the track is buzzing with more than 1,700 fans. But the crowds aren't big enough, Clements says, and the track is still losing money. There are only two billboards lining the speedway inside, one for Chick-fil-A and the other for the track's tire supplier, Hoosier Tire, flanked by empty slabs of plywood.

But to many, it's almost a second home.

Dennis Crostic, 56, has been a speedway regular for 48 years. His father used to bring him when he was younger. Crostic and his wife, Judy, have been coming here together for 25 years, and they sit at the eastern end, at the top of the grandstands, where they have a fish-eye view of the races. 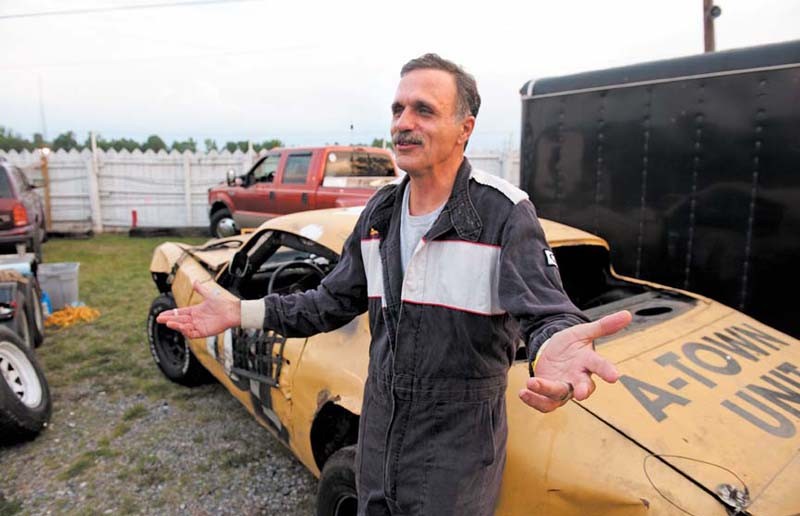 "I like NASCAR racing too," Crostic says, but at Southside "you're up close with the locals. It means more to you when you know some of the people out there racing."

Crostic teaches auto repair at the Chesterfield Technical Center, and says many of the drivers have come through his class: former students such as Daniel Thomas, 29, who wins the U-Car race on this Friday.

Thomas bought his car, a Chevy Cavalier, for $300, and spent $1,300 rebuilding it. He wants to move up, but can't afford it just yet. He works at DuPont, unloading rail cars, and is getting married next month. He met his fiancée, Jessica Halderman, at Southside. They planned their wedding for Sept. 17, during an off week, so as not to interfere with racing.

THERE WASN'T EVEN supposed to be racing this year. After a hiatus, the track renewed its NASCAR affiliation a year ago, and Clements expected more drivers would return to Southside as part of NASCAR's Whelan All-American Series. But Clements suffered a stroke in January, and she canceled most of the season. She recovered more quickly than expected, and by late April announced the track would have an abbreviated race season, 10 races instead of 20. 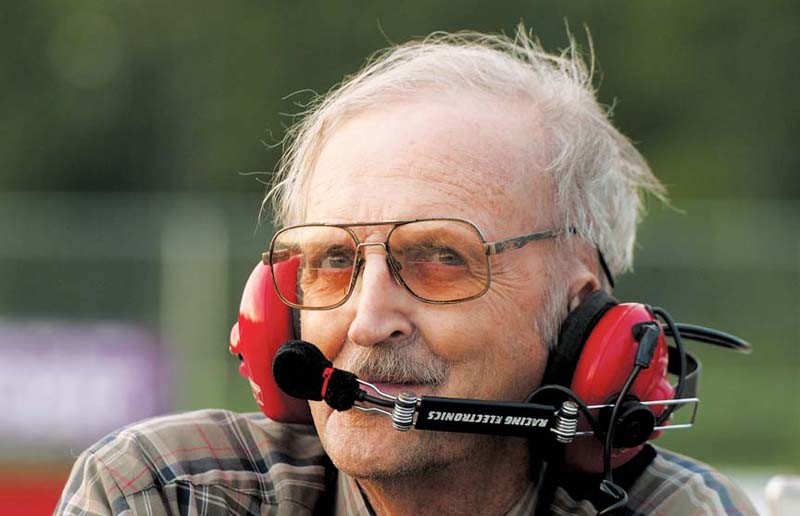 She hates doctors, and rarely if ever went for checkups. After washing clothes and making a pot roast Jan. 14, she stayed up to watch the news. She was told her granddaughter, "who's in the school of the genius," was going to appear on the television for a piece on the gifted program at Manchester Middle School. She tried to stay up till the 11 o'clock news, but fell asleep. She woke up at midnight.

"I was just swimming," she says. "Everything is tingling. I just laid there and prayed." The left side of her body had gone numb. Her husband begged her let him take her to the hospital. But she hates doctors, and tried to sleep it off.

She eventually went to the hospital at her husband's urging, and fortunately hadn't suffered any permanent paralysis or brain damage. Within a couple of months she was back at the track, albeit delegating more of the work. She had done just about everything, including unloading the tire trucks on Thursday afternoons. But no more.

Clements was inundated with phone calls from drivers, their wives and mothers, long-lost friends of her daddy.

"My almost dying brought interest to the place, I don't know," she says.

On Friday night, the roaring of the engines has a rejuvenating effect. Ellington, the 68-year-old rookie, gets some advice from Crackerjack, the 76-year-old former champ who's itching to return to the track. Ellington places seventh out of a field of 13, but Crackerjack says he could do better. "He likes to run in the bottom, like you run in a box," he says, explaining that staying closer to the top gives you more speed into the straightaway.

Crackerjack reminisces about the old days, and the virtues of racing on dirt, which he says is faster. Then Ellington drops the news. On Sept. 2 Crackerjack is planning to drive the car in one of the two 25-lap races scheduled for the night.

If only Southside could channel its early days, he'd surely whip the entire field.