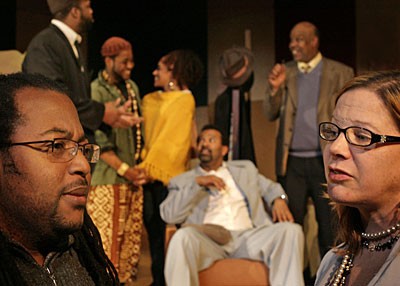 When the economic downturn took hold a couple of years ago, the number of co-productions among Richmond's theater companies surged. But what started as a financial strategy for companies — split the costs, double the potential audience — has turned into an artistic boon for theatergoers. Two of the most critically lauded productions last year were co-pros: “The Sound of Music,” offered by Barksdale Theatre and Theatre IV, and “The Winter's Tale,” produced by Henley Street Theatre Company and Richmond Shakespeare.

The number of high-profile co-productions will continue to climb in 2011, with Barksdale co-producing “Legacy of Light” (opening Feb. 4) with Theatre VCU, and Richmond Triangle Players and Henley Street joining forces on “The Last Days of Judas Iscariot” (Feb. 24). The year will also see a surprising newcomer to the Richmond co-pro scene: Petersburg-based Sycamore Rouge. The only professional company in Petersburg will start off working with the African-American Repertory Theater on August Wilson's “Jitney” (Feb. 5), and follow that up with “Art” (April 22), produced with Richmond Shakespeare.

You might think that these two shows represent an attempt to gain a greater footing in the Richmond market by the young company, which celebrated its fifth year last month. But the company's artistic director, K.B. Saine, flatly rejects such an assertion. “We would love to build our Richmond audience,” she says. “But there are so many other companies doing good work there already, it doesn't do any good to compete with them.” Instead, Saine says that the two shows are the result of “two very different partnerships, and they came about in very different ways.”

After producing “Ma Rainey's Black Bottom” in 2008, Saine had committed to doing all 10 plays in August Wilson's century cycle. With African-American Repertory Theater also tackling Wilson's cycle, “We were going to start overlapping,” she says. So about 18 months ago Saine approached AART's Artistic Director Derome Scott Smith about collaborating. The result? “We're essentially announcing the same show in the same season but cooperating on it instead of competing,” she says.

“Art” emerged from Saine's interest in directing a show starring other artistic directors, known as ADs “I'm a horrible actor so I'm really interested in the fact that so many ADs in Richmond — Derome at AART, James Ricks at Henley Street, Grant Mudge at Richmond Shakespeare — are phenomenal actors,” Saine says. Scheduling conflicts ultimately complicated her plans to cast other ADs in principle roles in “Art” (the final cast hasn't been announced). Still, she says she's excited about the production because it will play a limited engagement on TheatreVirginia's old stage in the Virginia Museum of Fine Arts.

While both “Jitney” and “Art” are collaborative productions, they represent the ongoing maturity of Saine's personal vision. “People have always asked me, ‘You're a director, why don't you move to New York?'” she says. “But New York doesn't need another director. I've always wanted to go somewhere that doesn't have theater and make it happen there.” Her ongoing focus is on energizing the community around her by bringing dynamic and important stories to the stage. During this season, theatergoers will see whether Saine's energizing vision will boost the Richmond arts scene like it has in Petersburg.

Information on Sycamore Rouge's productions can be found at sycamorerouge.org.