Jackson Ward has a comfortable new spot for soul food that delivers satisfaction. 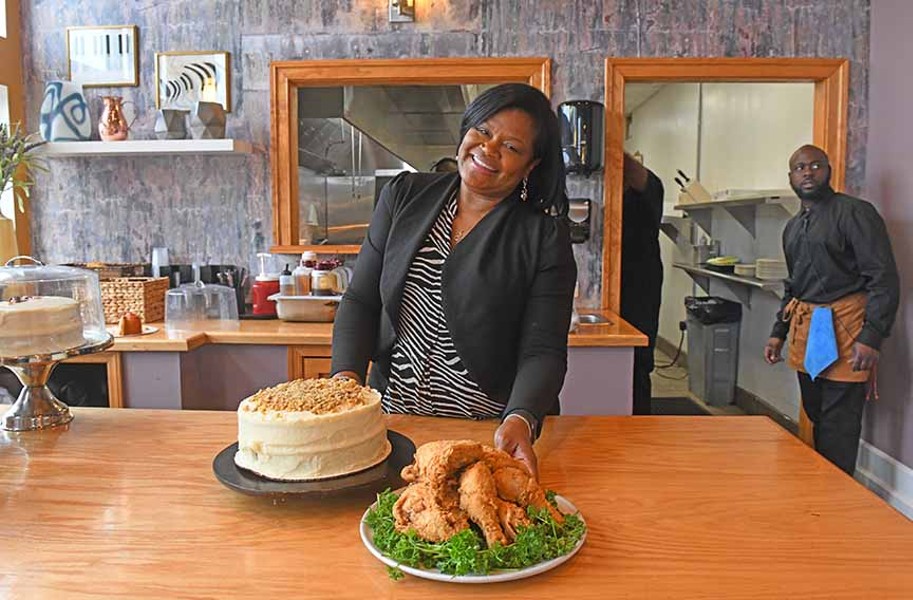 When it was announced in June that Southern Kitchen had been lured away from Shockoe Bottom to take over the ground floor space at Eggleston Plaza, Jackson Ward had reason to cheer.

Croaker’s Spot, which once anchored Second and Leigh streets, had long since moved to Manchester and Mama J’s Kitchen on First Street is so popular that the wait for a table often exceeds the length of a meal. Jackson Ward was ripe for the kind of time-tested soul comfort food that historically black neighborhoods have long been known for.

After opening, Southern Kitchen found itself in the sights of Gordon Ramsay’s “24 Hours to Hell and Back” in October. Ramsay and crew set out to transform the restaurant with a renovation, new menu and, in typical TV hyperbole, “hope for the future.” The results are dazzling.

Situated on a corner with two walls of glass, the restaurant exudes a welcoming warmth, both in decor and the friendly smiles that greet every new guest. A 10-seat bar and a row of high tables are separated by a wall from the main dining room, appointed with a cheerful green banquette dotted with pillows and tables overlooking Second Street. Like so many Jackson Ward buildings, high ceilings project a sense of spaciousness, while jazz as smooth as the surface of the bar pours from the speakers, doing its part to set the mood.

Likely one of the first things your server will share is that Big Mama’s fried chicken ($18), whether white or dark meat, is going to take some extra time. In the meantime, squares of moist but not overly sweet cornbread are brought to the table, where we use them to accompany an apple pecan salad ($8 half, $12 whole) overloaded with organic baby spring mix, Granny Smith apple slices, candied pecans, feta and craisins. My companion notes with pleasure that the raspberry walnut balsamic vinaigrette arrives in two little pitchers, allowing for custom dressing application. Not a big deal to some, but much appreciated by others.

As we dig into the salad, the owner, who’s been making the rounds to each table, appears to say hello. When we rave about the generous size of the half salad, she shares that she takes a holistic approach to eating. “Greens are good for you, so I say give the people plenty of greens,” she says with a big smile. “It’s not going to break us.”

When our entrees arrive, we’re in awe of the sheer amount of food we’ve ordered. My two pieces of chicken produce a satisfying crunch with every bite, though the breading could have used a touch more seasoning, while the country meatloaf ($16) is as big as a T-bone. Mind you, it’s also an ode to a childhood staple for some of us, with an abundance of sauteed onions and house-made brown gravy — and a side of mashed potatoes — to bring it home. Honestly, all the sides are down-home good, making it hard to pick a favorite. From the tang of toothsome collards to the sweet crust of yams to a bowl of savory stewed tomatoes mixed with black eyed peas, it would be easy to make a meal of sides.

Come lunchtime, the thrifty eater would do well to focus on the specials menu, where everything costs $11.99. A fried boneless breast over a half strawberry field salad ($11.99) can make the eater feel both virtuous and indulgent, much like the cheeseburger salad at Lucy’s does. If your lunchtime budget is grander, a shrimp po’boy ($18) checks all the boxes — crispy fried shrimp, buttered roll, lettuce and tomato — although if you’re a purist, know that chipotle aioli stands in for traditional remoulade. It comes with a mound of fries, or sub in a side for a $2 up-charge.

As it should be in a Southern kitchen, the sweet tea is seriously sweet and gracious hospitality oozes from every staff member. As we’re finishing dessert, our server comes over to see if my companion, who finished her lemonade, wants a to-go lemonade for the road. Dessert devotees can choose from the cakes du jour, all impressively tall and generously iced. High marks go to coconut cake, with neither the cake nor frosting being overly sweet, and a nontraditional German chocolate slice with an unexpected layer of dark chocolate icing.

Appropriately for a restaurant in the neighborhood once known as the Harlem of the South for the top-notch musicians who played there — among them Duke Ellington, Billie Holiday and Lena Horne -- Southern Kitchen has a stage. In the back of the restaurant, it’s easily identifiable for the silhouettes of musicians painted on the brick wall. Performances are usually scheduled on weekend nights, but people have been known to show up wanting to play and are shown the stage.

After three satisfying meals, it’s safe to say that the smart ones would ask for nothing more than to play for their supper. If I had an ounce of musical talent, I know I would.