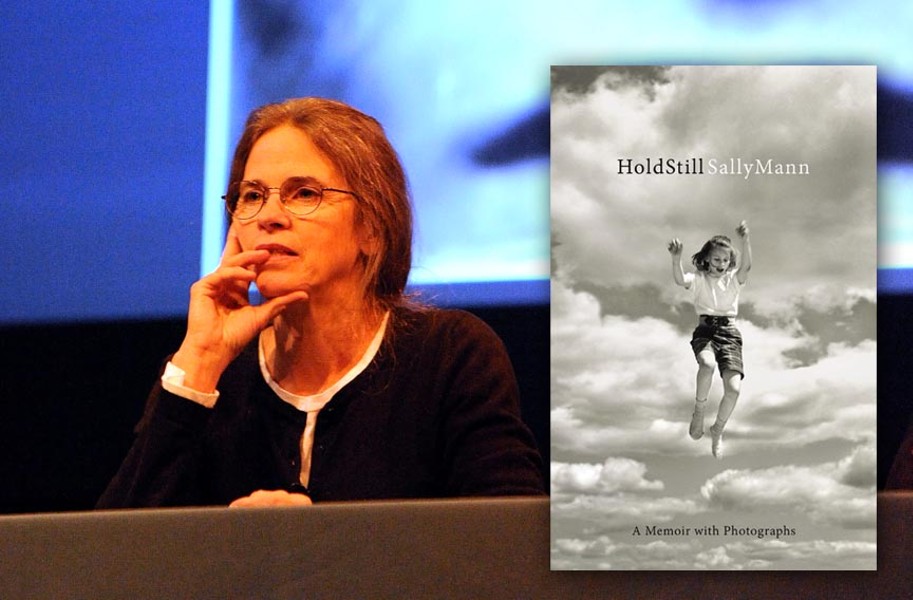 Scott Elmquist The new book by famed Virginia photographer Sally Mann, pictured at VMFA in 2010, has been hailed as an “instant classic among Southern memoirs of the last 50 years” by The New York Times.

Sally Mann says she never aspired to be a controversial photographer.

Her collection “Immediate Family” from 1992 started the ruckus raising. It depicted her three children in various states of undress while they roamed her farm in Lexington. Despite a standing ovation for Mann at the Virginia Museum of Fine Arts in 2000, Gov. Jim Gilmore condemned her work.

He and others felt that the innocence line had been crossed. But Mann, undaunted, kept producing and pushing boundaries. The artist later accepted a commission from The New York Times to document corpses at the Body Farm, a forensic research site in Tennessee. She also released “Proud Flesh,” a paean to her blacksmith and lawyer husband, who was diagnosed with late-onset muscular dystrophy.

As tempting as it might be to accuse Mann of willfully attracting ballyhoo, her recent memoir dispels such misgivings. For newcomers, that’s one reason to read “Hold Still.” Another is Mann’s episode-chocked life. She has a talent for grabbing scenes from thin air and registering them with taut, sometimes sassy, prose.

Also the pages are filled with pictures, both color and black and white, and not only of the voyeuristic family album variety. Mann’s artistic hits and misses are laid out, too, with explanations of how they came about. Fans will be well-fed.

The book is a genealogical rollercoaster, delving into the possibility that genetic fate is real. Mann starts out by opening boxes in her attic. Born to leftist intellectuals, she was looked upon as a weird feral kid who rode horses. She finds her husband, Larry, just as she exits boarding school and embarks on the serious work of homesteading and artistic discipline.

But as the book goes on, a more complicated picture develops. Part two, devoted to Mann’s mother and her Welsh heritage, is certainly R-rated. Through this messy account, Mann weaves an exploration of her budding photography career, detailing her transition from “Immediate Family” to a collection that represents her love of the American South. She talks about capturing Southern landscapes in all their gothic grandeur with view cameras, which are accordionlike boxes on tripods. The photographs in “Deep South” are humid, smudged and wispy.

Ironically, the author discovers that her mother’s ancestors had a profound attachment to landscapes. Homesickness was expressed with a Welsh word that might be translated as “memory of a memory” — or, in modern parlance, a photograph. Score one for Mann’s theory of genetic fate.

The third part of the book continues to go deep by addressing the issue of race. Mann was raised by a black woman affectionately named Gee-Gee, short for Virginia. Despite the joyous discovery of a humanitarian great-grandfather, Mann cringes at her memories of 1960s America. During a family vacation feast at Howard Johnson’s, Gee-Gee waits in the car, looking through the window.

There are a few delightful metaphors that lighten the somber mood of this passage. Consider this one, about her politically progressive mother being featured on page two of The Richmond Times-Dispatch: “[S]he got a lot of important things done, many of which have gotten folded up in the selvage of the opening curtains of the new era in America.”

By part four, the passage on “Daddy,” Mann’s chips are all in. She discovers the extent of her father’s lifelong and somewhat hidden obsession with death. The handsome country doctor spent his honeymoon photographing the morbid Orozco mural at Dartmouth College, for starters. He even taught crows to respond to the banging of an aluminum pan so he could feed them. “Jim Crow” was the name of one pet crow, naturally.

Given Mann’s artistic preoccupation with mortality, this is another score for her theory of genetic predetermination. Yet it’s worth recalling here, too, the moments of free will that solidified Mann’s career, such as her friendship with the late Bev Reynolds. Because of Reynolds, Mann returned to Richmond several times after Gilmore’s harsh remarks.

For fans of the photographer’s work, “Hold Still” feels like required reading. For newcomers, it’s an engrossing memoir written by one of Virginia’s best living artists. And for detractors, well, it offers a great opportunity to have a change of heart. S