Why does the new M Bistro seem so inconsistent? 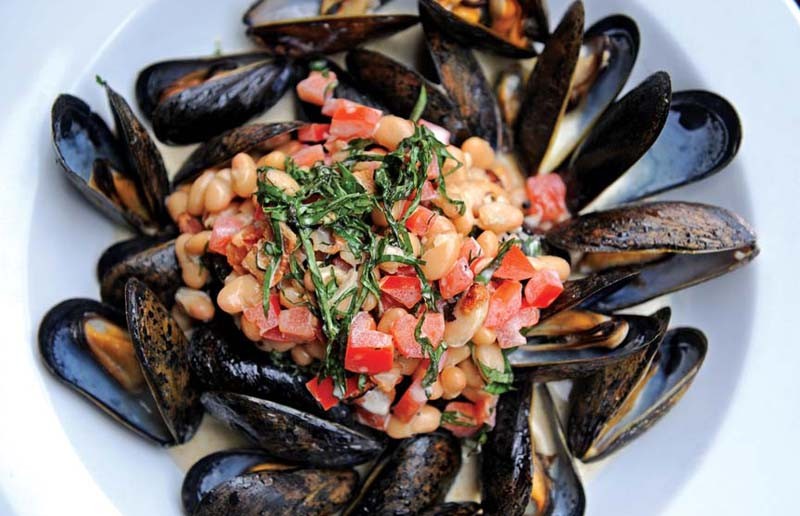 A restaurant’s first days in business can be like a thrilling novel. The chef and his cohorts are protagonists facing each new customer, forging through the early opinions — who loves it, who doesn’t and why? — while they work out the kinks and hope to save the day with food.

Michael Hall has been around, and he’s been in this plot before. The Bull and Bear Club, None Such Place, the Vine, the Dining Room at the Berkeley — they give him the background to be the perfect hero. Knowing his stuff long has been his business.

With all this experience, why does the newly opened M Bistro seem so Jekyll and Hyde?

My first visit to the Rocketts Landing space, fashioned in red, black and wood, is punctuated by an overzealous and overpersonable waiter. Explaining a wine by recounting “how big a buzz” it gave him the previous night was original and may deserve a laugh, but is more at home with Jägermeister shots and pickle backs. Other collegiate mistakes with dishes and utensils are a running theme throughout the meal.

Desperately salty lamb spareribs ($9) accentuate the fraternity house vibe. Their accompanying cabbage is a limp afterthought. Sriracha deep fried pork ($7) reads well on the menu but is tough, the taste reminiscent of the wing sauce at a well-known restaurant chain.

Once a couple of entrees are ordered, we’re overlooked entirely. Hall visits tables and sits in the dining room with one guest while we have empty water glasses and wait for our main courses. A peppery filet of beef ($26) is perfectly medium rare but is forgotten until someone yells — one detriment of an open kitchen in a small restaurant.

Accompanying foie gras spinach, delightful-sounding, consists of tiny chunks of liver smattered into salty, wilted spinach. Chilean sea bass ($30) is cold atop a spill of oil. Spoon bread is exactly the opposite, burnt-crunchy and cookie-cutter round. Shredded cabbage and leeks should have been fried a little longer and perhaps drained.

Two nights later, an entirely different restaurant emerges. Our server, attentive and unobtrusive, is a wealth of knowledge on beer and wine, discussing a draft Triple Karmeliet ($5), a split of chardonnay (Steele Cuvee, $18) and an Aperol cocktail ($10) effortlessly like a circus juggler. Mussels ($7) — also a suggestion of the waiter — are redolent with white wine, basil, cream and thick pieces of bacon and are a definite hit. Two seared sweet scallops ($11) paired with even sweeter egg-forward caramel corn custard complement the wine and beer nicely.

A New York strip ($22), while a little over the requested medium rare, is flavorful and interesting with barely done, appropriately salty fingerling potatoes. Sage-scented broccoli adds a new component to this steak and potato dish, removing it from the same-old category. Duck breast is made even sweeter with the same caramel corn pudding and thin grilled asparagus. Every bite is accentuated by molasses, making this a dish perfectly suited to those with an insatiable sweet tooth.

Service stays professional and formal. Dessert appears with the same cheerful split personality. A too-tall chocolate cake ($5) is curiously overburdened with unsweetened cocoa powder but is moist and rich. Espresso cheesecake ($5) is dense and mochalike but also plagued with ample cocoa.

Breakfast croissants, a coffee bar, wines and pâtés to go, and even delivery to Rocketts neighbors make this a full-service operation marked by the overachieving giant M on the north face of the contemporary building, as impossible to miss as Hall’s distinctive culinary persona.

The components for a successful restaurant all are here — experienced chef, attractive space, occasionally excellent service and rich Southern food. With consistent appearances by all four components there won’t be any question as to which part of M Bistro is the good part. And like a good thriller, every meal will have a satisfying ending. S