Papi’s is serving up Miami flavors and queer inclusion downtown. 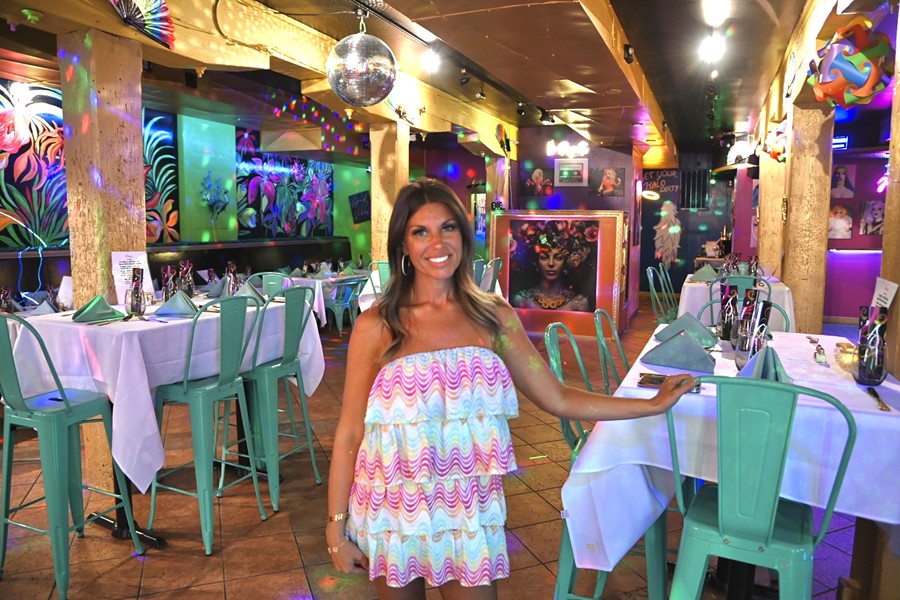 Scott Elmquist Adrienne Londoño and her husband have created their own Miami-style, neon oasis with Papi's restaurant and club at 1407 E Cary St. "We wanted to recreate that fun, South Beach lifestyle," she says. "And give our queer friends a place that they can just be themselves."

Distraught by the pandemic, Adrienne Londoño fled to her mother’s home in South Florida. Watching friends and fellow restaurateurs lose their life’s work in Richmond was too stressful, so she sought refuge in Miami surrounded by family. The bright colors, the vibrant cultures, and the queer community in South Beach revived her spirits and inspired her to bring a slice of the fun back to her adopted home.

With her Colombian husband Carlos, Londoño already owns and operates a coterie of cantinas around Shockoe Bottom and the Slip: La Bodega, Casa Fiesta Mexican Kitchen, and Margarita’s Cantina. With the Londoños’ fourth spot, Papi’s, the couple is combining flavorful Latin favorites, delectable drinks, and a safe space for their LGBTQ+ friends at 1407 E. Cary St.

“Opening a place like Papi’s has been a dream of mine for a long time because I love Miami,” says Adrienne. “Everybody is so different and they're all beautiful with their different cultures and walks of life. We wanted to recreate that fun South Beach lifestyle and give our queer friends a place that they can just be themselves.”

Although the Londoños aren’t LGBTQ+ themselves, many of their closest friends and three daughters’ mentors are. “I personally don’t know the gay experience, but I have witnessed what my friends go through and how the world treats the queer community,” she continues. “That’s why we decided that Papi’s isn’t just LGBTQ-friendly, it has to be an actual queer bar.” 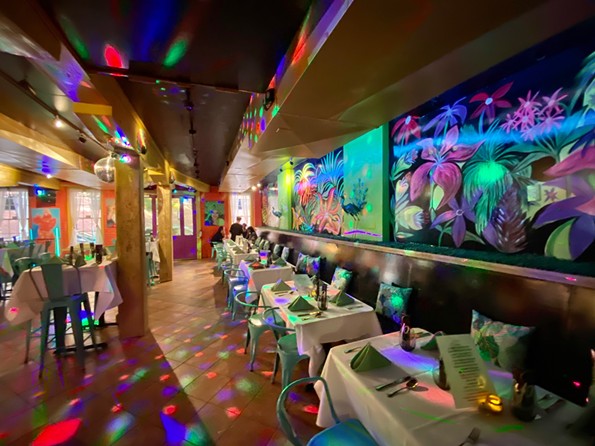 To signal their commitment to the community, the couple rushed to open Papi’s on June 30th, the final day of Pride Month. The Londoños booked a DJ for the night, but they never expected impromptu performances by two local drag queens who happened to come out to the grand opening: You'neek Nu'York and Dasani Starr.

Seemingly out to check every queer bar box, the couple has also offered the new establishment to two Richmond drag stars for a series of recurring events. Each Saturday night, Amber Saint Lexington is taking over the venue for her own drag-filled dance party called Saint Saturdays. Organizing all drag brunches and bingos is the beloved stunt queen, Melanin “Moneybag” Monroe.

With karaoke on Wednesdays and dollar tacos on Tuesday, Papi’s offers everyone a reason to get down to Shockoe Slip for some fun, especially if you’re a fan of Latin flavors. Carlos took the lead on naming menu items with no fear of getting too creative.

Adrienne’s favorite dish is just as intriguing as it sounds: the Octopussy. Marinated and seasoned octopus is battered, fried to order, and ends up in a huge hoagie bun topped with pico de gallo and slaw, serving up a visual as powerful as its flavors.

Guests looking for a more mainstream menu choice should opt for the Pollo Hey-driana, a sweet almost teriyaki style chicken dish that comes on top of a bed of rice and covered in cooked onions and peppers alongside sweet plantains. As an appetizer or just a bite to share during a show, the Little Devil Nachos are a top seller; the pile of red flour tortilla chips topped with all the classic nacho fixings has quickly become a guest favorite. With gluten-free options and the ability to make any item vegetarian, the Londoños make it easy to please a picky party at Papi’s.

Also the Sunday brunch menu, whether paired with drag or a live DJ, is not to be missed. Churro waffles, churro French toast, and churro pancakes prove a tasty trio for anyone who likes to start their day off indulging their sweet tooth. Embracing Shockoe Slip’s Southern heritage, the Londoños couldn’t resist putting a giant chicken-and-biscuit dish on the menu. A deep-fried breast and homemade biscuit doused in sausage gravy is sure to help any hangover. For those who live for a boozy brunch, you can’t beat Papi’s $1 mimosas.

Beyond brunch, the drink menu dazzles: Served in its own signature glass, the Peacock blends coconut rum, Bacardi 151, orange juice, Hpnotiq, pineapple juice, and even more rum to create a cocktail that’s “sweet but not gonna knock you out of your seat so hard that you can’t have another one afterwards,” according to Adrienne.

Slideshow Inside Papi's: A Little Bit of South Beach in Shockoe 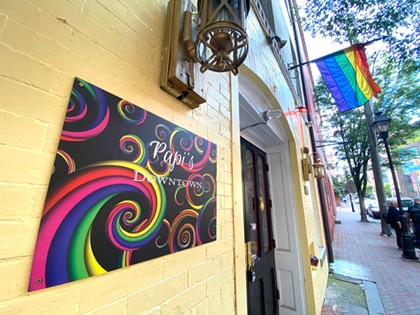 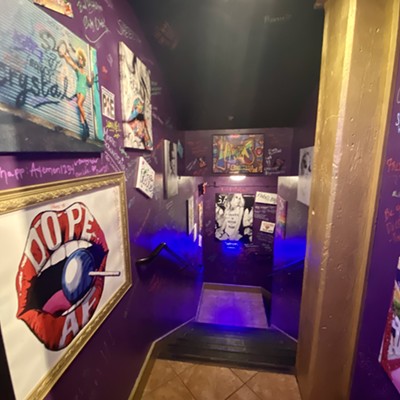 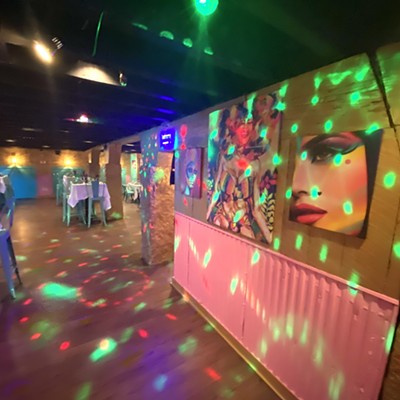 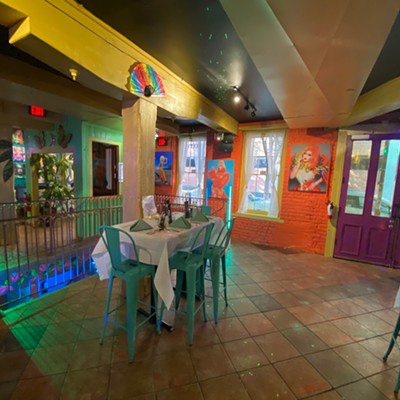 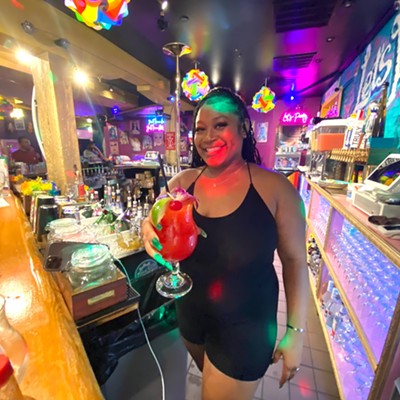 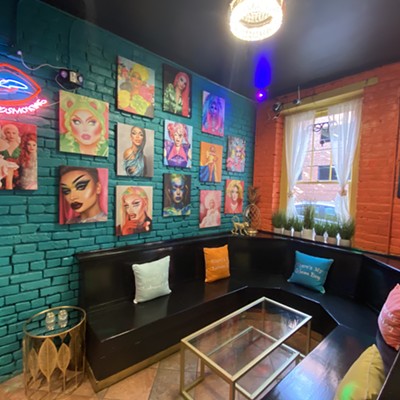 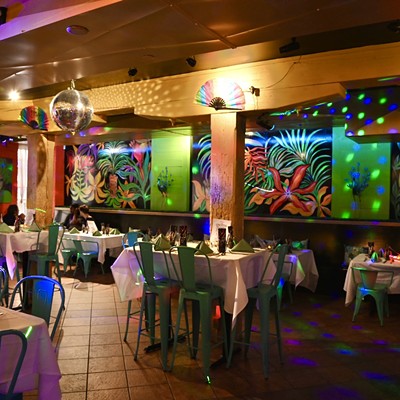 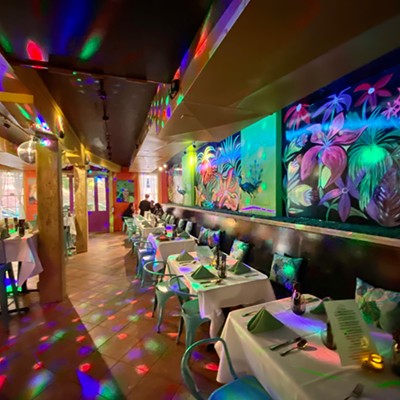 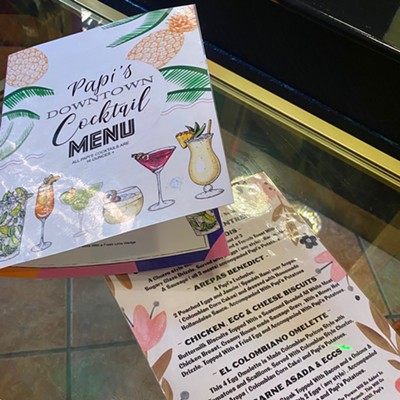 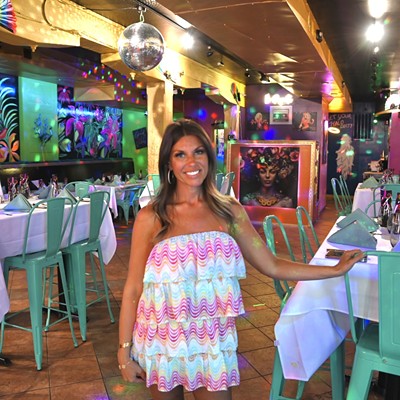 Inside Papi's: A Little Bit of South Beach in Shockoe
By Scott Elmquist
Click to View 11 slides

Not a place to shy away from drama, at Papi’s they actually serve the Mermaid Water in a small fishbowl. Its bright blue hue comes from its unique combination of triple sec, two kinds of rum, Sprite, and blue curaçao. If you’d rather stick to a standard bearer, go for one of Papi’s half dozen rotating frozen margarita flavors that Adrienne sometimes worries are “so strong they’re like gasoline”—aka the perfect strength for a true queer bar.

Whether you come for a show or just the afterwork happy hour, the Londoños want folks of all walks of life to feel welcome at their new establishment. “People might walk in and be surprised by the mix of people here, both our staff and guests,” says Adrienne. “No one is judging, so everyone can come in and feel like they are part of Papi’s diversity.”