Barksdale-VCU collaboration works as Cliffs Notes, not as theater. 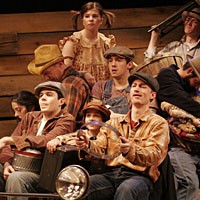 The first collaboration between Barksdale Theatre and Theatre VCU, “The Grapes of Wrath”, is a lesson in faith — or more accurately, a lack thereof. It is basically a college staging wrapped in a pretty professional package, ultimately cheating all entities involved out of a fully satisfying experience.

Based on John Steinbeck's classic story of the Joad family -- Oklahoma sharecroppers forced from their home during the Great Depression -- Frank Galati's adaptation lacks faith in Steinbeck's primary themes and bogs down the script with too much detail from the novel. This will please fans of the book but it makes for cumbersome theater. The cast slogs through endless scene changes and the play becomes almost as much about devices for reconfiguring props as delivering a story. Adding to the awkwardness of the show are the overzealous acting efforts of the majority of student actors. There is much pantomiming of script and excess animation from background players demonstrating a lack of trust in ability to act internally.

On the upside, this cyclone of a production is enveloped in flawless technical stagecraft. Every sound cue is realistic and dead on. The lighting is beautiful and mood enhancing. Student designer Dennis Williams' packing crate inspired set is innovative and functional. On the performance front, Charley Raintree holds his own against the pros as the philosophical Jim Casy. Marta Rainer is as much the centerpiece of the cast as her character, Ma Joad, is the center of the family. The farewell scene between her and Tom (a capable Joseph Carlson) is particularly strong.

Theatre VCU seems to have the dominant influence over this production, tipping overall quality towards high-level college work. Perhaps the students and Barksdale audiences would be better served through professional-mentorship collaboration in the future. Fans of the novel and those that are required to read it should flock to see this show — it's better than the Cliffs Notes.

“The Grapes of Wrath” runs through March 21 at the Barksdale Theatre at Willow Lawn and is part of the Acts of Faith Festival. For information go to barksdalerichmond.org or call 282-2620.