The Soup Nazi from "Seinfeld" dishes it up at Max's Positive Vibe Café.

Actor Larry Thomas, aka the Soup Nazi on "Seinfeld," has been acting for over 30 years. From theater in Los Angeles to TV guest appearances after "Seinfeld" and independent films these days, Thomas makes dozens appearances a year and probably hears "No soup for you!" thousands of times.

The son of a restaurant owner who had to learn to cook when his father left the family when he was 7 years old, Thomas has a cookbook coming out for the holidays, "Confessions of a Soup Nazi." It's filled with recipes he's perfected over the years, including, of course, recipes for soup.

You can meet Thomas in person tomorrow, Saturday, Oct. 18, from 1-6 p.m., at Max's Positive Vibe Café's Souper Bowl I. He'll be judging a soup contest (what else?), with area chefs vying for the best soup in Richmond. 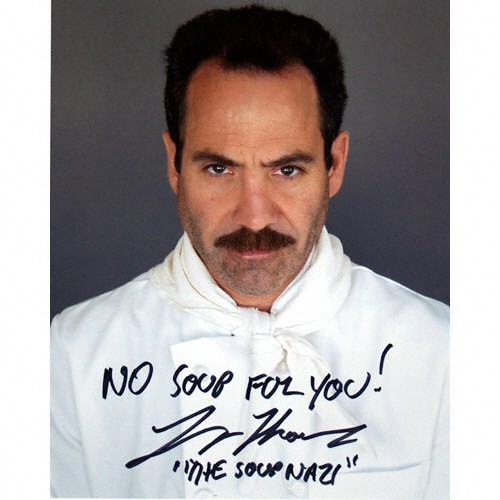 Here's his story, in his own words:

"I was majoring in journalism in the late 70's, and I really thought I was going to become a news reporter. It was the only thing I could think of in the entire lexicon of jobs a guy could do that sounded kind of interesting. I was taking a music class just for fun and I met this girl, and I wanted to go out with her. I called her a couple of times, but she was busy. I figured that since I was registering for classes the next semester, and I knew she was a theater major. I figured I take some theater classes so I could figure out if she was really busy or just not-interested busy. I took [classes] and fell in love with acting.

"I wasn't good at it. One of the younger teachers who I'd become friends with told me right off the bat, "Don't do this. Don't quit journalism and do this thing. I've been doing this all my life, and I've been teaching here for 10 years, and I know who has talent and who doesn't have talent."

"One of the things that happened while I was in that junior college acting class was for about half a semester, Kevin Spacey showed up, right out of high school. He was 19 and so unbelievably talented. I always tell people -- and this isn't taking anything away from Kevin because I know he went to Juilliard and did other things afterward -- but when I watch him today, he's still that same actor that I watched back then. I mean, he was that good then. I turned to my buddy Tony in acting class and said, 'Now, technically do we have to get that good to make a living at this?" [Spacey] asked me to leave L.A. and go New York with him. He said we weren't learning anything at that school. I turned him down -- I was from New York and didn't want to go back then. There's a road not taken.

"All these years, I think of Kevin and how good he was -- that there's room to get that good before you stop trying. I've never bumped into him again but if I ever did, I would thank him for that. I might have given up on the training halfway through if I weren't always thinking of how good he was.

"I was in an acting class, and my teacher was one of the great acting teachers. His name was Milton Katselas. At one point, he basically threatened to kick me out of class if I didn't produce a professional acting job in six weeks. The next six-week, manic panic for a job resulted in "Seinfeld."

"I had a great meeting with [the casting director of "Seinfeld"]. At the time, my day job was really odd. I was in the bail industry -- I was a licensed bail bondsman and court investigator. He said at the end of the interview, "This is one of the most interesting interviews I've ever had with an actor -- we never talked about acting."

"Seinfeld" was a very rare situation. They were so popular and at the top of their game with a crazy man like Larry David at the helm that nobody bothered them. [Actor] Tom Barry, who appeared on the show with me, turned to me and said, "Wouldn't this be paradise, man? To do this every day?"

"What happened to me is rare as rare can be. To do six minutes on a TV show and be in danger of being typecast? It wasn't a bad thing. Who knows if I'd ever gotten into the world of TV if it hadn't been for that?

"I was getting so many offers to do appearances and [to go to] autograph conventions that I finally left that day job and took a leap of faith. I'm not tired of it at all. I have a great affinity for people when they're at their best, not stuck in traffic, not at the post office -- people who are meeting somebody they like. That's humanity at its best."