Composer/guitarist Sally Gates of New York experimental group Titan to Tachyons talks about her surreal music before a show at Gallery5. 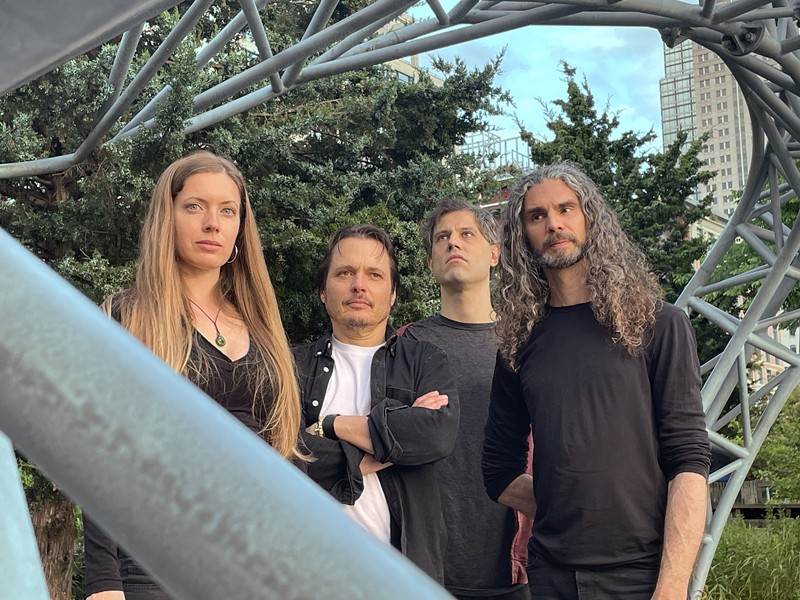 A tachyon is a hypothetical particle that travels faster than light.

The instrumental quartet's music draws from the realms of surrealism, quantum physics and science-fiction through eclectic, improvisational passages that juxtapose fluid grooves with shifting time signatures and dark, metallic flurries. Imagine watching a time-lapse video of the cosmos forming from an ominous jazz lounge inside a David Lynch film.

Their debut LP, Cactides, was released in mid-2020 to critical acclaim and the group is now touring behind its follow-up, Vonals, a mesmerizing album of spaced-out, free-flowing soundscapes with explosive, frenetic outbursts.

Style spoke with guitarist Sally Gates about late night promises, talking to a crowd and why music matters.

Style Weekly: How’d you get into music?

Sally Gates: My earliest musical memories are of playing my aunt's piano when I was around 3 years old. Eventually she gave the piano to our family, and I’d make up little melodies for my parents before I even really knew how to play.

I started piano lessons when I was 5 and continued for about six years. I also tried violin and saxophone because we were lucky to have readily accessible music lessons at school. Then for no real reason at all, I started playing guitar at 14 and it just stuck.

How did Titan to Tachyons form?

I began writing music for what would become the first album back in 2017. I was living in Miami and began jamming with drummer Davin Sosa. We started working on the material I had and recorded a rough demo of the first two songs.

A few months later, I moved to New York and got booked to play a show that I recruited Kenny Grohowski and Trevor Dunn for. We improvised for most of the set, but also included the tune "The Starthinker is Obsolete," playing it live for the first time. After that, I kept writing with Kenny, but due to Trevor's hectic schedule we started to look around for someone who could join us as a permanent member.

I met guitarist Matt Hollenberg around the same time and we jammed a bit together on guitar. Over a drink one night, I told him we were looking for a bass player. He promptly volunteered to play bass VI [a six-string Fender bass tuned an octave lower than guitar], which was a 2 a.m. decision that he stood by. We were able to bring Trevor back in to join us on the track “Everybody's Dead, Dave,” on the first album, then he joined the band for the second record, Vonals.

The most significant difference is the addition of a second bass player, Trevor. Writing for two bass players was a highly enjoyable challenge, and allowed us all to step between different rhythmic, harmonic, and soloist roles. We collaborated on all the material. I’d bring song drafts to the band, then we’d develop them together, adding drum and bass parts and refining the form. Vonals gets more abstract and exploratory than Cactides, and there’s a focus on doing more with less.

With your sound, isn’t it all about playing live?

The best part is the power behind playing live. There's a certain energy and propulsion mixed with adrenaline that you don't get anywhere else. I also love the improvisational elements in the music. They keep you present, engaged, and communicating with each other and it's always different.

It can be difficult when you can't hear each other properly, but fortunately that doesn't happen often. The most challenging thing for me these days is talking to the crowd. I'm still getting used to being the front-person.

[What are your] influences?

Surrealism, science-fiction, and quantum physics. In a type of synesthesia, the music depicts elements such as the melting and disintegration found in Dali's works. Motifs are unraveled, becoming angular and chaotic, as if the band was pulling itself apart. Other themes make use of bent, squishy timing, imitating a record melting and warping.

I use science-fiction storylines and images as a guide to dictate song structure and textures. Stanley Kubrick and David Lynch are also big influences, which become apparent in a sound-painting manner. Musically we pull elements from free-jazz, progressive metal, and whatever else catches our ears. I typically find myself trying to imitate bass and saxophone players more than guitarists. That said, the most guitar orientated music I listen to would be King Crimson and Secret Chiefs 3.

If you could open for anyone, who would it be?

I'll go ahead and repeat myself here, King Crimson, Secret Chiefs, and then add Primus, Mr. Bungle, and Dillinger Escape Plan, if they were still around.

Why is music more important than ever now?

The pandemic was such a hard-hitting blow to the music industry that it's important to support artists now to help us all get back to some sense of stability and longevity in our careers. It really highlighted the disparity between artists and other industries. Music and art enrich us all, and it's a shame that society has largely been trained to expect both mediums for free, leaving most artists to struggle and burn out with no financial backing. Everyone got a taste of life without live music, and it was very sorely missed.

All I'll say is that it's about the tachyons.