The Biava String Quartet headlines a packed week of classical. 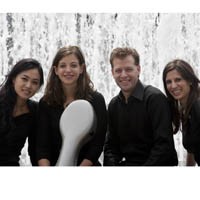 Wandering through Richmond's art-music scene can feel like a journey through a strange landscape. Occasionally there are patches of desert, in which it seems as if there are weeks with no interesting fare; then suddenly, in late February, a lush oasis with a surfeit of choices, including an recital from Parisian organist Christophe Mantoux that may persuade even the more skeptical listeners that an organ concert can avoid sounding like the overwrought soundtrack to a movie about the apocalypse.

For the second installment of the 2009-'10 Richmond Festival of Music, the Biava String Quartet will perform exquisite gems of string literature with cellist James Wilson and Richmond Symphony principal violist Molly Sharp. This ensemble will offer works by Brahms, his protAcgAc, Dvorak, and the less well-known composer Ginastera. The Biava is the last winner of the Naumberg Chamber Music Award, a prize along the lines of an Oscar for classical musicians, although its more akin to a MacArthur genius grant. The Naumberg anoints these young players as some of the great living performers, both technically and artistically. The prize is so exclusive that it's not even given every year. Biava was the last ensemble to receive the award — in 2003.

The brilliant Jon Nakamatsu also is scheduled to perform Beethoven's Piano Concerto No. 5 in E-flat major, also known as the “Emperor Concerto,” on Feb. 27 with the Richmond Symphony. Nakamatsu has led the sort of life that would make for a modest Hollywood bidding war — a good-looking public high-school teacher emerges from his cocoon to triumph at the 10th Van Cliburn Piano Competition and becomes a classical music superstar. This CenterStage concert also will give audiences the opportunity to audition Steven Smith, one of the three remaining candidates for the post of Richmond Symphony music director.

Last but not least, the Richmond Philharmonic presents Schubert's Symphony No. 9 in C, also known as “The Great,” and Hindemith's “Symphonic Metamorphoses Themes of Weber” In the interests of full disclosure, this writer is a member of the aforementioned orchestra. But don't hold that against it. This all-volunteer band delivers coherent renderings of masterworks at a price well below rubies.

The Richmond Philharmonic performs Feb. 28 at 4 p.m. at Virginia Commonwealth University's Singleton Center. Suggested donation is $5 per person or $10 per family.