From mash-ups to the Grammys, producer and musician Brian Burton is a restless musical visionary. 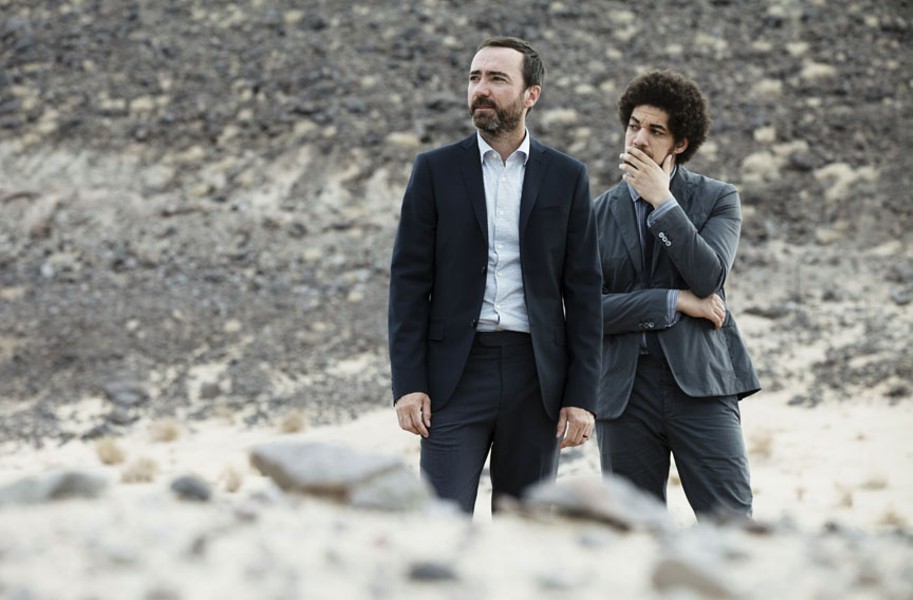 James Minchin Brian Burton, right, aka Danger Mouse, stands alongside his partner in Broken Bells, James Mercer of Shins fame. Esquire magazine listed Burton as one of the 75 most influential people of the 21st century.

The band is a collaboration between Grammy-winning producer and musician Brian Burton — better known by his stage name, Danger Mouse — and James Mercer, lead singer of the Shins. It hides deceptively existential lyrics and themes behind layers of synthesizer-laden pop music heavily influenced by post-punk and new wave '80s bands.

Like most of Burton's projects, there's also a mishmash of other influences, as wide-ranging as the Beatles, the Bee-Gees and sci-fi movie soundtracks.

"We have very different lifestyles but we're very similar people," Burton says by phone from his Los Angeles home. "James has a kid and is married and I do completely the opposite. … He lives in Portland and he comes down to L.A. and moves in for the week or whatever and we just start working in the daytime and drinking at night and talking about life, and all that stuff winds up on the album."

In the case of Broken Bells' 2014 sophomore album, "After the Disco," those talks centered on "nostalgia and thinking about what it really means to be adults," Burton says, adding that he and Mercer plan to continue collaborating as Broken Bells for a long time.

"He's one of my favorite singers. I love his voice, his melodic sense," Burton says of Mercer. "I was always a fan of the Shins, so this was something I thought, 'Well, let's give it a shot,' … and it seems to work really well for us. Musically, we never really get stuck or anything."

Burton first earned public acclaim in 2004 for "The Grey Album," a brilliant mash-up of Jay-Z's "The Black Album" and the Beatles' "The White Album." He co-produced the top-selling 2005 Gorillaz album "Demon Days," earned a producer of the year Grammy for Broken Bells' eponymous debut album and produced a Grammy-winning album by the Black Keys.

He also co-produced U2's new album, "Songs of Innocence," which was released free to Apple's more than 800 million iTunes subscribers this month as part of a reported $100 million deal between Apple and U2. Interviewed a couple of days before the U2 album was released, Burton said, "I am definitely excited about it. … [But] everyone's tight-lipped so I can't really talk about it."

In 2006, Burton and singer CeeLo Green set the music world afire as the band Gnarls Barkley with their hit song "Crazy." On tour and in promo shots, the duo also was known for wearing outlandish costumes from movies ranging from "Star Wars," "The Wizard of Oz," "Austin Powers" and "Back to the Future."

"I was always a nervous wreck. It … made it more fun getting dressed up like that," Burton says. "When you get a chance to be in front of a bunch of people, you might as well not be boring, so that was the idea there."

The future of Gnarls Barkley is unclear, Burton says, but that doesn't have anything to do with Green's recent felony conviction stemming from drugging a woman with whom he had sex and the subsequent furor that arose over comments Green made about rape on Twitter.

"Those things are completely separate. Everybody has their own stuff. I'm far from perfect myself," he says. "Me and CeeLo still talk. We just haven't gotten back in the studio so I don't know yet. We haven't really firmed anything up. But you never know."

Burton collaborated with Italian producer Daniele Luppi on the 2011 album "Rome," which was inspired by spaghetti Western soundtracks and featured performances by Jack White and Norah Jones. One of the album's tracks was used in a pivotal scene of the award-winning TV series "Breaking Bad."

Burton also worked with the late Mark Linkous of Sparklehorse, co-producing two albums by the native Virginian and one-time Richmonder. They collaborated along with film director David Lynch on the posthumous Sparklehorse album "Dark Night of the Soul," which featured performances by singers including Iggy Pop, the Strokes' Julian Casablancas and the Flaming Lips' Wayne Coyne.

"We knew each other pretty well," Burton says of Linkous. "We were pretty good friends."

Despite his past stage fright, Burton says he's beginning to enjoy touring. A movie buff, he worked with Montreal-based Lüz Studio to produce a multimedia show that will wow Broken Bells fans. "It's a much more visual show," he says. "We have a really big light show with lots of visuals and things being projected while we're playing."

The studio's team of artists worked with the musicians. "They had the album almost before we were finished with it, getting the visuals to match up," Burton says. "When you're watching the show, it's like you're seeing a scene in a film." S