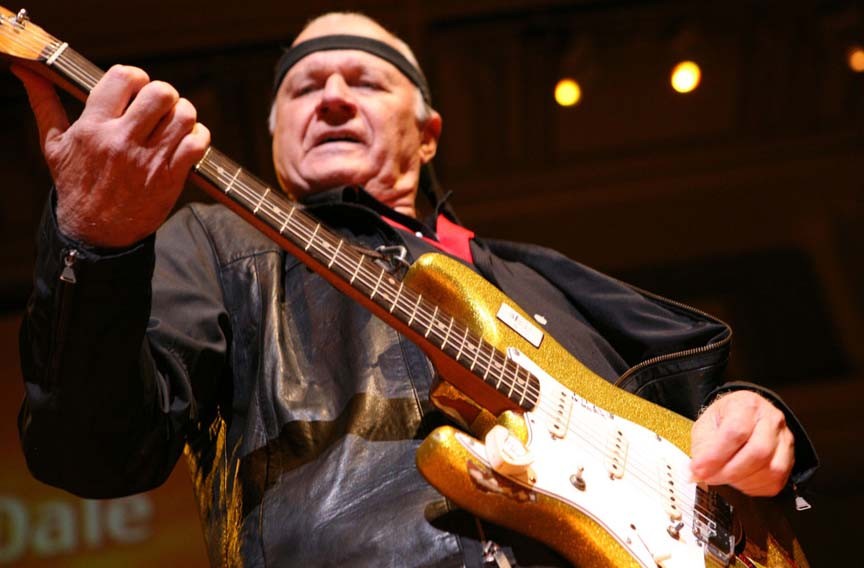 What the world at large knows of Dick Dale — that is, if it recognizes his name at all — is a single instrumental passage. But if a musician were to be burdened with one-hit-wonder status, one could do a whole hell of a lot worse than "Misirlou," the booming, trembling surf-rock tantrum that careened through "Pulp Fiction's" opening credits and later Guitar Hero II, a Nissan ad and the Black Eyed Peas' "Pump It." Though born as a traditional Greek folk number, the tune might as well be a Dale original for how smartly he's shaped it as his own and pushed it into pop culture.

The "King of the Surf Guitar" comes to Richmond next week. And for anyone doubting the man's nickname, all it should it take is a high-volume blast of "Misirlou" — a mixture of speed, rawness, power, tradition and finesse — to knock out a naysayer. (For more hits, proceed to the other gems in Dale's discography such as "Nitro," "Mexico," "Esperanza" and "Banzai Washout.")

Though Dale's fingers have always been infinitely more crucial to his work than his singing, his voice has its grand, attention-snatching charms, too — particularly away from the stage. Speaking from his home and airport hangar in Twentynine Palms, Calif., the wily 75-year-old fires off one anecdote after another until you could write his life story. Any chance you knew about Dale's fondnesses for exotic animals and martial arts? Fine, we can just move on to his clean-cut lifestyle, his struggles with cancer and diabetes (the latter ongoing), the time he performed a song in Australia for the Aborigines, the story of how his wife, Lana, decided she'd grow up to be with him when she was just 2 years old, and how Elvis' manager, Colonel Tom Parker, dispensed wisdom to Dale.

Showmanship dominates his assertive conversational style. Think of a Gene Simmons interview, except that Dale's less of a jerk. This comes through while he explains the origin of his headband — a long-time staple of his performances.

"My shows were going two-and-a-half, three hours," Dale says, "and I'd be so intense by going from one instrument to another — my shows were nonstop — [that] the sweat was coming down into my eyes, burning severely, so severely wiping them wouldn't work. It was horrible. I couldn't control it." Help came indirectly from wrestling legend Andre the Giant, a Dale fan who appreciated the guitarist's intensity. The wrestler's wife grew so worried when watching Dale perform that she made him a black headband to catch the sweat. Before the guitarist knew it, Andre's wife had sent him about 30 headbands, all matching his leather jacket. "That there helped me perform," he says. "My eyes never got full of sweat anymore."

The sweat's all in the music now. "Everything I play, on a scale of one to 10, I play on a 15," Dale says. In other interviews, he's boasted about blowing out the entire speaker system at London's Royal Albert Hall, described himself in action as "a rollercoaster of sound," and said that he plays about "frustration, patience, anger" and makes his "guitar scream with pain or pleasure."