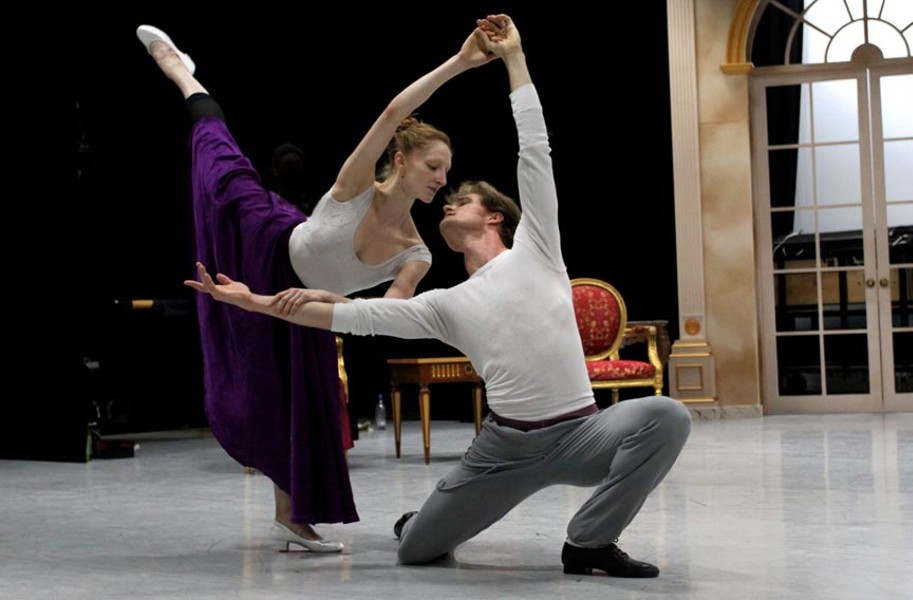 John MacClellan Dancers Lauren Fagone and Phillip Skaggs, who is retiring after this performance, in rehearsal for “Liebeslieder Walzer” with choreography by George Balanchine.

Whip-thin and dressed all in black, choreographer Philip Neal is bringing George Balanchine to life in the rehearsal studio of Richmond Ballet. Company dancers Phillip Skaggs and Lauren Fagone are in the trenches, learning the nuances of “Liebeslieder Walzer.”

A ballet for only four couples, the first act features ballerinas in ball gowns waltzing with partners in tuxedos. And if ever a man was made for a tuxedo, it’s Skaggs. His 6-foot, 3-inch lithe frame and movie star face have graced the stage at the Richmond Ballet for 16 years.

At the end of this season, Skaggs is retiring. “Liebeslieder Walzer” is a farewell celebration of his years at the ballet.

But today, Skaggs is still on the job. He and Fagone have their eyes fastened on Neal, who works to teach precise, nuanced movements; every tilt of the head and arch of the arm is meaningful. A répétiteur of the Balanchine Trust and a former New York City Ballet dancer, Neal stages Balanchine ballets all over the world.

“Only five companies in the world have ever done this ballet,” says Skaggs of “Liebeslieder Walzer.” “And out of those five companies, it’s only the high principals who get to do it. Philip [Neal] had to wait 20 years before he got to do it. Because all the other New York City [Ballet] principals were like, don’t touch. It’s mine. When I’m dead and gone, you can have this tuxedo.”

Fagone and Skaggs are covered in sweat and breathing hard by the time Neal finishes with them. “I think,” says Neal, hugging Skaggs and Fagone, “that was everything on my bucket list.”

In the second act, the ballerinas dance Balanchine’s exacting choreography in long tutus and pointe shoes. The men remain in tuxedos. The ballet is set to the bittersweet music of two of Johannes Brahms waltzes. Onstage, the dancers will be joined by two pianists and four vocalists singing poems by Fredrich Daumer and Johann Wolfgang von Goethe.

“Liebeslieder Walzer” is about love in all its complex forms. Balanchine, married three times and notorious for his numerous affairs with his dancers, knew the subject well. He imbued his balletic exploration with regret, loss, sweetness and passion. “In the first act,” Balanchine famously said, “it is the real people who are dancing. In the second act, it is their souls.” S