At the soul circus with the mayor and the city manager. 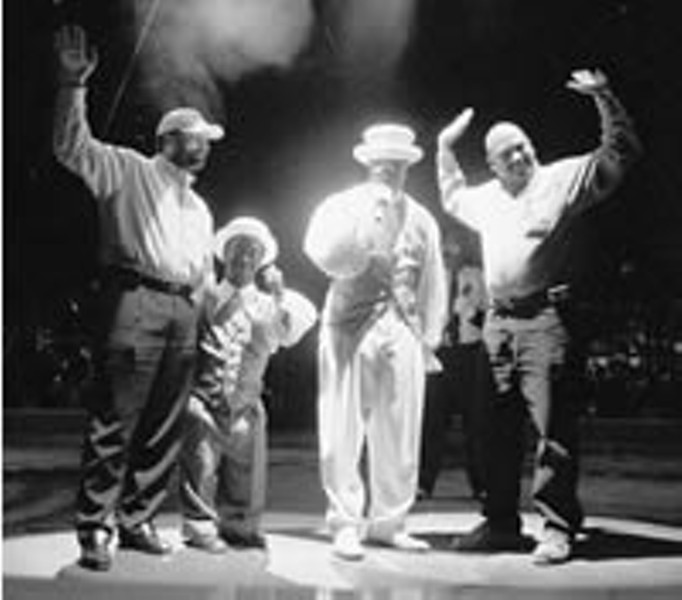 We hope so, anyway.

The photographer and reporter stand outside the big top, in the halogen glare of ballpark lights, and wait. A long line snakes across the gravel lot of the Parker Field Annex, just north of the Diamond on Boulevard. Fried-food smells waft through the air. Kids shriek and wave glowing plastic swords. The city liaison assures us that McCollum and City Manager Calvin Jamison will arrive soon.

Various city and circus officials appear at intervals, wanting to know if there's anything they can help us with. The reporter thinks: They're hoping we will bother the mayor for a minute and then go away peaceably. They've got a show to run, after all.

A few minutes before 7:30, the journalists are ushered toward the entrance and told McCollum and a minute. And here they are, kids in tow, in casual shirts and baseball caps.

But where are the sequined suits and top hats? Oh, this is all they're wearing, the city officials tell the two journalists. They have no costumes, no rehearsal, no act — except the mandatory joviality for the benefit of the press.

When you were young, did you ever want to be a ringmaster? the reporter asks.

"Of course," the mayor says, smiling. "All my life I've dreamed of this opportunity."

He elbows the city manager. "Hey, you ready?"

"Let's do it!" Jamison replies.

McCollum's 8-year-old daughter, Courtney, comes over to find out what's delaying her dad. What's your favorite circus act? the reporter asks her.

The photographer moves the mayor and the city manager toward a painted background, away from the ranks of portable toilets. They pose for a portrait. They assure the reporter they're excited, that this is a great thing for the city, that everyone will love it.

Anything else? The city officials ask with Jamison will arrive in polite smiles. Jamison is poised to go. So is the mayor. The reporter says thanks, enjoy the show, and they hurry back to their seats.

So much for the exclusive behind-the-scenes circus story. Dejected, the reporter pushes her way through heavy curtains into the tent, hearing clapping and whistles from within, and stumbles to a seat. It's dark except for the wildly waving glowing swords.

Then the music begins — hip-hop and R&B that pound the floor. You can feel the vibrations in your chest. Ringmaster Calvin "Casual Cal" Dupree Jr. swaggers into the ring, the spotlight shining on his silver zoot suit. "He's got soul," a man says appreciatively.

And the show begins. Stilt-walkers appear; they not only walk but leap, hop and limbo. Gabonese acrobats catapult themselves onto each others' shoulders, creating wavering towers four men high. Three muscled men climb tall poles upside down, like squirrels, using only their feet.

An elephant uses its mouth to lift a dancer by the leg and whirls her around so gently its teeth leave only a tiny tear in her fishnet stockings. A trainer leads a bemused-looking giraffe into the ring, which then slurps carrots from the mouths of two squirming volunteers.

In ringside seats, the mayor and the city manager are laughing with their kids. Their fingers shoot toward the ceiling when the ringmaster says, "If you've got soul, point up." The reporter hopes one of them will volunteer for the circus's Soul Train dance contest, but no such luck.

Casual Cal announces, several times, that UniverSoul is "the only African-American owned and operated circus in the world!" Riotous applause erupts from the audience each time he says it, louder than mere acrobats and elephants could provoke. This excitement is different from the usual kind. This is pride.

At intermission, Brian Little, the city's program manager for cultural arts, comes over to talk. For 40 days, ever since the announcement that the Atlanta-based UniverSoul Circus was coming to Richmond for the first time, Little's been sweating the details of promotions, parking and pitching the tent. Now, at last, he's got time to sit back and marvel.

"It is the soul that really moves the circus," he explains. Little talks about how the performers represent the African Diaspora, from the Ivory Coast to South Africa to Australia. Their ability and their obvious pride, combined with the audience's enthusiasm (no one sits more than 50 feet from the stage, he points out), make UniverSoul, now in its ninth year, something different. "It grabs you and it's like, wow," he says. "These are wonderful acts of courage that these people are doing tonight."

Little says there's a rumor McCollum and Jamison will ride the elephant into the ring tonight. They don't. They just stroll onstage, with none of the ringmaster's swagger and strut. But the mayor proves he's got the showman's spirit when he bellows "Welcome to the UniverSoul! Soul! Circus!" into the microphone. Even Jamison, who sits stone-faced through many a council meeting, steps into the spotlight and belts out a "Sooouuuulllll!"

After contortionists, aerialists, dancers and a tiger have appeared, dazzled and disappeared, the lights come up and the crowd streams out of the tent. This time, the city manager seems not to mind at all that a reporter is lurking in the crowd to find out what he thought.

"Do you feel the energy?" Jamison asks. He raves about the contortionists and the crowd. "You got to say — this is special." S