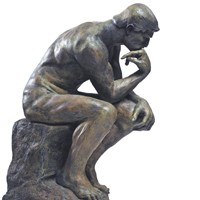 On Jan. 20, I attended the General Assembly's multihour budget meeting. It began with mother after mother — along with their children with disabilities — pleading that programs not be cut. Each story was compelling. I was unable to stay long enough to speak in favor of support for the arts — money that could, for example, help the Virginia Opera.

Which begs questions such as this: Which is the better use of our personal philanthropic dollars — supporting a museum or helping autistic children?

Two days after that budget meeting I heard a heartening presentation by Karen Stanley, executive director of CARITAS, which provides emergency shelter for, and transforms the lives of, individuals and families.

Which is more worthy of my philanthropy: helping a family achieve a selfearning path to a home and a job, or sponsoring a concert by One Voice Chorus?

On Jan. 23, I received an e-mail from my sister Sallie's son David and his wife. They're giving their money and running a half-marathon to help an organization that provides therapy and early intervention for children with special needs.

If I have only one philanthropic check, should I write it to that organization or to Virginia Commonwealth University's guitar program?

Here's one answer: “There are many things that are worthy of our support, and we really can't compare them.” But of course we do compare.

My education, avocation and volunteer efforts have been in the arts. My career has been raising money for the arts. Here's the sentence that underpins my own answer: Hospitals and highways and human services enable us to live; the arts are among those things we live for.

Twenty years ago donors gave money that enabled a guitarist to provide music for hospitalized children at the VCU Medical Center. I was sitting next to a 15-year-old autistic girl who, upon hearing that guitar music, spoke for the first time in her life. A year ago I was a CARITAS volunteer helping feed and provide emergency shelter for 30 men. One man smiled with joy as he showed me the drawing he had just created on a small sketch pad.

Here is one thing I know: Most of us — sooner or later — will have human needs that simply can't be solved or healed. The arts can help us transcend those needs.

The Virginia Holocaust Museum's murals were painted by art students. In 2004 I attended a dedication ceremony where I watched a now well-to-do survivor cry real tears upon seeing those artworks.

On Dec. 29, 1998, Janet and I and our two children visited Canterbury Cathedral. It was the 880th anniversary of Thomas Becket's martyrdom on that site. Our children, Kelly and Thomas, were of course behaving like typical siblings, and the American tourists were behaving like typical American tourists. But after we were seated inside that beautiful cathedral, the choir filled the space with soft and ethereal a cappella voices that transported every one of us to somewhere that was glorious.

And last April 6 at Sixth Mount Zion Baptist Church's Sunday service the loud and jubilant children's choir lifted all of us with its multichorus, rhythm-rocking rendition of “Higher and Higher.”

A second thing that I know is this: Even those of us who are not currently threatened by human needs are, and need to be, transformed by the arts. They engage our collective spirit of humanity.

Janet teaches art to all sorts of students, from VCU's off-campus graduate students to very young at-risk children. While we threaded our way among the every-slice-of-life crowd on Hanover Avenue's Halloween block on Oct. 31, Janet felt someone tugging at her jacket. She saw the grinning face of a 6-year-old girl whose life has few advantages. She looked up at Janet, pointing with one hand and pulling her mother's attention with the other, and beamed, “You taught me to paint!”

There is a movie scene that I recommend in “The Shawshank Redemption,” where Andy Dufresne suddenly and unexpectedly broadcasts throughout the prison an aria from Mozart's opera, “The Marriage of Figaro.” We watch as the inmates — confronted by those two heavenly sopranos — pause from their outdoor labors and their indoor torments to look skyward toward the music. We watch as they're touched by joy.

John Bryan, a longtime fundraiser for Virginia Commonwealth University's School of the Arts, recently became president of the Arts Council of Richmond. He can be contacted at john@richmondarts.org.

This article first appeared in Richmond Giving, Style Weekly's quarterly magazine for Richmond volunteers and philanthropists. Opinions expressed in First Person are those of the author and not necessarily those of Richmond Giving.