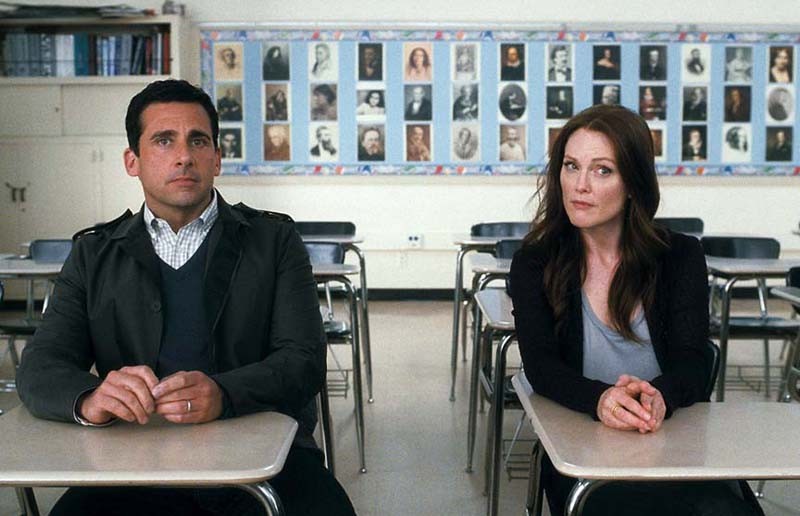 Maybe it's crazy or even stupid to expect all that much out of "Crazy, Stupid, Love," but the buzz and advertising barrage promises something interesting. How about daring, or at least odd? No such luck. It's romantic comedy.

The movie pairs Steve Carell and Ryan Gosling in a buddy movie-meets love story about one guy helping another regain his manhood. The title suggests something intense and heedless, but the result turns out to be as calculated as a diet soda commercial. Carell, often profiled as a brave new comedian of our age, yet again plays Steve Carell, the guy from "The Office." If you like that you'll probably like Cal, his feckless middle-aged man set adrift in singleness. He's like a toy designed to spout non sequiturs and other eccentric outbursts. Everyone else is there to pull the string. It isn't terrible, but it isn't crazy stupid, at least not at the same time.

Maybe the above is the result of having to satisfy both halves of the audience of a date movie with incongruous ideals. "Crazy, Stupid, Love" promotes both womanizing and soul-mate finding while revealing what becomes of Cal when he's unceremoniously dumped by his wife, Emily (Julianne Moore), who also cheated on him with a co-worker (Kevin Bacon). Married since he was 17, Cal finds himself no better at meeting new women than he was at keeping his wife. Futile trips to an upscale local singles bar ensue, and here's where the film, still in its first 30 minutes, firmly declares its intentions. Carell starts doing his shtick, loudly exclaiming in the bar to other women, for example, that his wife "is sleeping with men who aren't me." You chuckle, but also realize any chance for real life — romantic, comic or otherwise — is as hopeless as Cal's New Balance sneakers.

At the bar, Cal notices Jacob (Gosling), a smooth, well-groomed regular who seems to go home with a different woman every night. Jacob eventually notices Cal too, and insists on doing something to help. Why, you wonder, is he doing this? Cal pipes up: "Why are you doing this?" Jacob's answer: "Maybe you remind me of someone." Huh? You may or may not have to wait the entire movie to realize that Jacob's response is just a line in a screenplay. His real reason for helping Cal is that it's the easiest way to get to the broad situational comedy at the movie's center.

The pace slows down a little and the energy picks up at this point. Jacob becomes Cal's pickup-artist coach. First he takes Cal to the mall for a makeover, then lets him listen in on his technique in bars. Both sequences go by too fast. The movie always skips the meat for the condiments, yet this is still its heartiest portion. Roger Ebert and Gene Siskel used to always say that better movies detail the occupations important to the plot, and here we actually get to learn at least a little of the practices that makes Jacob such a success. If the movie had continued in this direction some interesting things might have resulted. There's even a nice symmetry between Cal's predicament with his wife, and a young, potential love interest for Jacob (Emma Stone), who might be about to become the next Emily.

But if that's a bad thing, why are we rooting for Cal and Emily to get back together? "Crazy Stupid Love," filled with various romantic intrigues, adult and childish, sensible and foolish, tends to mix them up. Cal's crime — being square — and Jacob's quality — being artificial — are at best superficial to the plot's resolution, at worst antagonistic to it. The movie skips blithely by any insights that might be found in their conflict as it moves toward bringing all its characters and their romantic plights together, first in a few forced confrontations and finally a group hug about finding a soul mate.

Yes, soul mates. They're a nice thought, but what are they really? That they're real and good is about as deep as the movie is prepared to go. In the end we get a speech about it at a middle-school graduation. Two speeches, actually. This is a letdown. After all the one-night stands and late-night yearning, this is the movie's final estimation of crazy, stupid love. (PG-13) 107 min. S