A soul record by Powhatan inmates from the ’70s gets a royal reissue. 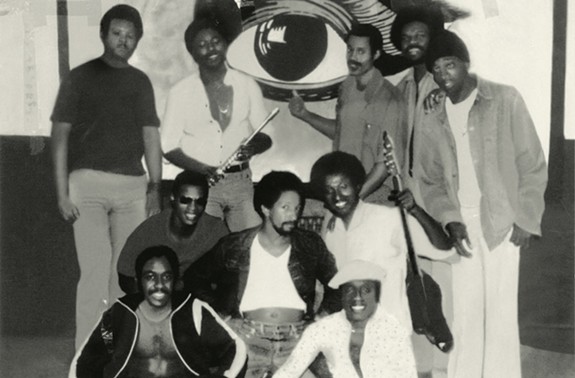 Hopping into an idling car with a bag of stolen money, McEvoy Chellis Robinson was unaware how bad his luck had turned.

After two years of playing bass and serving as musical supervisor to Otis Redding, Robinson had returned home to Newport News with a newly acquired drug habit. With local gigs unable to support his addiction, Robinson ended up stealing a bank deposit bag from a pharmacy and jumping into a car outside, demanding that the driver floor it.

“And go they did -- right to the police station,” an Associated Press story recounted. The getaway car Robinson chose was occupied by a police officer.

Embarrassing as the incident was -- Robinson went by Robert Glover from that point on -- the failed 1969 heist proved instrumental in creating Edge of Daybreak’s “Eyes of Love,” an album highly prized by soul music collectors.

The album, recorded by inmates incarcerated at Powhatan Correctional Center, 30 miles west of Richmond, is seeing reissue this week by Chicago’s Numero Group. Practically everything about it defies the odds.

The album’s road to reissue began with Numero’s Jon Kirby, who used to stop by Carrington’s Music in Petersburg on trips between North Carolina and New York. While Kirby knew that owner James Carrington performed and recorded gospel music, Carrington never mentioned his time in prison and his role as keyboardist and bandleader of Edge of Daybreak. It was only after Kirby befriended fellow Southerner Marty Key, now owner of Steady Sounds on Broad Street, that Kirby learned of Carrington’s past.

“He was a saved man,” says Kirby, whose work on the liner notes for the Numero release “Purple Snow: Forecasting the Minneapolis Sound” was nominated for a Grammy. “He had gone on to do gospel and have a family and be a pillar of the community, and wasn’t necessarily bragging about this incredible record he had made during a kind of uncomfortable period.”

Carrington grew up near Farmville and was targeted by law enforcement in 1971 after he entered into a consenting relationship with a white woman. According to Kirby’s exhaustively researched liner notes, “vague assault charges filed against him by his girlfriend’s parents stuck.” “I don’t need to go into all that,” says Carrington, who still operates his store in Petersburg. “That’s one of the reasons I hesitated about putting the CD out, because what’s in the past I just wanted to leave in the past.”

After his incarceration at Richmond’s infamous penitentiary on Spring Street, Carrington was moved to Powhatan, which allowed its prisoners to form bands. He soon created Edge of Daybreak, composed of nine members whose fascinating back stories are included in Kirby’s liner notes. The group’s beautiful, high falsetto, for example, was provided by Harry “Cupcake” Coleman, an openly gay man so nicknamed because of his diminutive size. At the age of 19, Coleman joined a cross-dressing R&B act called the Affections that covered Aretha Franklin while playing gigs on Brookland Park Boulevard and in the South Side.

While incarcerated, Carrington began ordering music from Richmond chain Bohannon’s Records and Tapes, and befriended owner Milton Hogue. Carrington eventually persuaded Hogue to see the band play, and he liked what he heard.

Hogue petitioned the prison to allow for a taping at Alpha Audio recording studio. Prison personnel inspected the studio and informed Hogue that he would have to contract one guard per prisoner, which would exceed his $3,000 budget for the project. Instead, Hogue sent a mobile recording unit from Alpha Audio to the prison.

With just five hours to set up and record in the prison’s recreation room, the band quickly cut the album’s eight tracks. Recording on a two-track, quarter-inch master tape, there was no room for mistakes or overdubs, and little could be done in the mixing room.

“There was very little time,” Carrington says. “Most of the songs it was just one take, and whatever you did on that one take, that’s what you had.”

As the band recorded the album’s final song, “Our Love,” prison guards began gesturing for them to wrap it up. Alpha Audio owner Eric Johnson was impressed at how well the recording turned out, later telling The Richmond Times-Dispatch, “If I didn’t know any better, I would have thought they were a band on the road who all happened to be incarcerated at the same time in the same place.”

The recording attracted some media attention when it was released, and Hogue pressed 1,000 copies of the album. Not all of them were sold, because Kirby estimates that about 200 were destroyed in some sort of basement flood at Bohannon’s. Shortly after the recording, some members of the band were transferred and eventually paroled. Upon his release, member Jamal Jaha Nubi formed a group in Roanoke called Business of Sweet Success, which reworked Edge of Daybreak’s “Let Us (Make Love)” for a 45. Carrington used his friendship with Hogue to start working at Bohannon’s part time through a work-release program.

Upon his release, Carrington began working full time at the Bohannon’s location at 114 E. Broad St., eventually buying the store from Hogue and renaming it Carrington’s Music. He grew his business to 11 stores at one point, and joined up with Edge of Daybreak member Cornelius “Neil” Cade to form Rise, which released a lone, eight-minute, freedom-funk single titled “Action.” Now, Carrington is heavily involved with gospel music and has recorded a number of albums.

But it’s the album they cut in prison that has a cult following.

“The people fortunate enough to own a copy of this record were pretty high-grade collectors in the U.K. and the U.S. as well,” Kirby says. “It had some mystique around it, it had a great story, it’s a great sounding record with incredible songs. It’s kind of the perfect storm of a great record obscurity: It’s rare, it’s desirable, musically it’s incredible.”

For Cade and other band members, they’re happy to finally get recognition for an album they created more than three decades ago.

“I’m glad that the people that picked it up and found us decided to do something with it,” says Cade, who played guitar, sang and wrote “Our Love.” “We’re real excited.” But Carrington would rather focus on his gospel endeavors and asks listeners to forgive mistakes that no one but the band members seem to hear.

“What you hear is a great blessing,” Carrington says, “because I don’t think nobody could do a take one round like that and have so few mistakes out of all the songs.” Mistakes or not, listeners seem drawn to the album for its music and its theme of overcoming hardship, perhaps best expressed by the inscription on the original album cover: “Our bodies are in prison, but we want our hearts and minds to be with the free world. The Edge of Daybreak symbolizes the morning when each of the band members will be free.”