At a popular nightspot, dreams of a bustling community hub fade away with the economy — and the city's new noise ordinance. 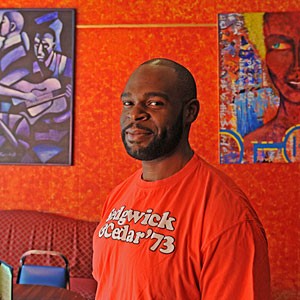 In all the ways that a restaurant can be in jeopardy of closing, Tropical Soul is. The owners say creditors are braying at the gates. Phone service at the Jackson Ward mainstay was cut off last month. The eager crowds that used to spill out onto Second Street during the restaurant's most popular evenings — open mic and reggae night — have dwindled in the last few months.

There are many culprits, says Tropical Soul's soft-spoken co-owner Calvin “Kalipha” Maddox. The price of food has increased. With the economy still a hacking invalid, Richmonders are less willing to eat out. But mostly Maddox blames the passage of the city noise ordinance.

In 2002 he and co-owner Nadira Chase opened the restaurant with visions of it evolving into a community hub. Though zoned as a cafe, there's a small, carpeted stage near the center of the dining room. There, Richmond's budding performing artists try out new material for Verses, the city's longest running open-mic night, held every Tuesday.

On the bulletin board near the bar hangs a postcard from City Councilman Charles Samuels. It arrived sometime after Tropical Soul was recognized by Richmond Magazine as one of the city's top soul food destinations, and reads ever-so-slightly like an epitaph: “I'm excited and proud to represent a district with such great restaurants as yours.”

“That we've stayed open this long is a blessing,” Maddox says, “but right now we're floating on faith.”

Since the city's rewritten noise ordinance was approved in February, Richmond police records show, officers have been dispatched to Tropical Soul to investigate complaints of “unnecessary noise” 13 times. Several of those trips occurred on either Tuesdays or Fridays, what Maddox calls the “crutches” that keep Tropical Soul open.

Many of those complaints are being made by one person, Maddox says, including the one that he says led to Tropical Soul losing a third of its business income.
Sitting among the empty tables and primary-colored couches in Tropical Soul's dining room, Maddox, 38, tells the story with the weariness of a guy who's running out of options.

It was around 1 a.m. on Nov. 13, Reggae night, when he says Richmond police officers placed him into handcuffs in view of his customers.

The officer had, as officers had been doing for months, arrived to ask the management to lower the volume, Maddox says. After some contentious negotiation, the officer ordered him to shut the music off, Maddox says. When he refused, he says he was cuffed and placed into what the officer called “investigative detention.”

Police eventually released him, issuing a ticket for violation of the city's noise ordinance — one of 125 that police issued since the new law went into effect.

Attendance at Tuesday Verses has been on a steady decline since the noise ordinance passed, Maddox says. “I've tried to work with the officers,” he says. “We'd turn down the volume on the band so low you could hear crickets in here.”

A week after he was issued a ticket, police wrote a second noise ordinance citation to the co-owner. Then, Maddox says, Tropical Soul's patronage fell off a cliff.

The noise ordinance in question — spearheaded by Councilman Samuels — has since been ruled unconstitutional. In April local rock band Little Master — Timothy Morris, Michael Bourlotos and Leah Clancy — challenged the law after being cited for “creating loud music,” a misdemeanor punishable by a $1,000 fine or six months in jail.

Questions about the constitutionality of exceptions for religious music and noise had long dogged the law. In a late November ruling, Manchester General District Court Judge Robert Pustilnik sided with the legislation's critics, ruling that the ordinance “forces anyone who makes a noise after 11 p.m. to ask themselves whether what they're doing is religious in nature.”

Following the ruling, the city dropped all pending charges against anyone who had been issued a citation for violating the ordinance, including Maddox and Chase.

But that may have come too late to help. Maddox and his co-owner aren't sure they can recover financially, and members of City Council are drafting yet another version of the noise ordinance. At 10 p.m. on a recent Tuesday, the regulars take turns on stage while staffers turn away late-comers at the front door. On this night, there are no open seats.

Still, Maddox continues shopping for financial help from a number of sources — the city's Economic and Community Development Department included.

Maddox won't reveal his financial figures. Asked how long Tropical Soul can survive, he doesn't sound optimistic. “We're hanging on now,” he says. “I don't know about tomorrow, much less next month.”