Richmond is ground zero in American politics, the place other government leaders need to visit to learn the secret of anger management. 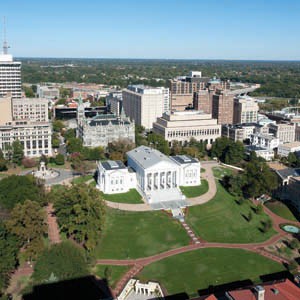 Now that the midterm elections are over, prepare for an influx of tourism: Richmond soon will be the most studied city in America. This self-evident truth recently dawned on a former governor and Richmond mayor, Tim Kaine, now President Barack Obama's right-hand man as head of the Democratic National Committee. Kaine told me he gets it. “How did I miss it, Goldy?” he wanted to know.

For months now the national polls said Americans were showing a record level of anger toward their Democratic-controlled government. Even Adam Sandler and Jack Nicholson, co-stars of the hit movie “Anger Management,” knew folks hadn't been this ticked off since a guy named Columbus shows up one day calling everybody Indians and demanding that they pay taxes to Spain. That's when the anti-tax, anti-big government, “tell the folks in power to kiss my a—” attitude started in the New World.

The tea party got most of the recent press coverage. But exit polls show whether left, right or in-between, voters weren't drinking tea — it was more like Red Bull, or Wild Turkey. The only reason Republicans didn't win everything is because they nominated some candidates so mad, they scared even the angriest of swing voters.

But now Kaine sees the light: Even though everything voters said was wrong with government goes double for Richmond, here people just shrug off what enrages other Americans. According to the exit polls, Americans are angriest about the lack of jobs, increasing evidence that our educational system isn't preparing their children and grandchildren to compete in the world economy and the government's insistence on throwing money at problems it never solves. And despite this lack of progress, the perks, pay and pensions of top elected and appointed officials kept growing, indeed outstripping comparable compensation in the private sector.

Hello America: Welcome to our world here in Richmond. “Who lost America?” seems to be the question so many people now ask, as they see our once dominant position in finances, education, manufacturing and other sectors being lost to our competitors. The great recession and its job losses finally awakened the working class to what's been happening for years, at their expense.

Yet while this is freaking out normally sane Americans everywhere, in Richmond we've adopted the motto of legendary comic book character Alfred E. Newman: “What? Me Worry?”

“Who lost Richmond?” has been asked and answered. The city finishes dead last among Virginia cities when it comes to job creation, or put another way in a Kaine administration study: It lost more jobs than anyone else.

While such a future gets other Americans angry, in Richmond we accept it. After all, despite years of promising, our elected officials have no written plan, not even an outline, for turning things around. Not long ago Richmond led the South in the financial, manufacturing, medical and transportation sectors. It also was the leading place for black pioneers in so many areas.

But no more. Richmond's motto is less is more. For example, among blacks, the poverty rate in Richmond is double that of Mississippi, the state symbolic for being last in everything.

Our government leaders have systematically figured out ways to squander all of our prior economic advantages, letting cities to our north and south take over in sector after sector. Now the mayor and City Council promise a new fairy tale: high-speed rail, the magic bullet for Richmond's future. Of course they have no idea how to pay for it. There isn't a state or federal official who says the money will be available in the foreseeable future. May you and your loved ones live so long that you can take one of those promised high-speed trains to the Fredericksburg slavery museum of another former governor and mayor, Doug Wilder.

Kaine figured it out: Richmond is ground zero in American politics, the place other government leaders need to visit to learn the secret of anger management. For example, Richmond has the most outdated school facilities in the state, the most expensive school administration, and a system that independent researchers have labeled a dropout factory.

A national study found that in Virginia upward of 75 percent of young adults couldn't pass tests requiring only the minimal math, reading and physical skills. These statistics have the president calling the situation a national crisis. But here in Richmond, the mayor, City Council and School Board have their statistics showing Richmond's kids are doing better than ever, far above the national norms. Of course, they conveniently have no record of what happens once they graduate.

Whereas this situation makes other Americans angry, here in Richmond our elected leaders somehow know how to keep these public emotions under control. So expect pundits and politicians alike in Richmond in the coming months, as they hope to find out our secret in time to use it in the 2012 elections. S

Paul Goldman is a longtime Democratic strategist who worked on the gubernatorial campaigns of Doug Wilder, Mark Warner and Tim Kaine.