Food Review: Live music adds to the taste experience at Selba in the Fan. 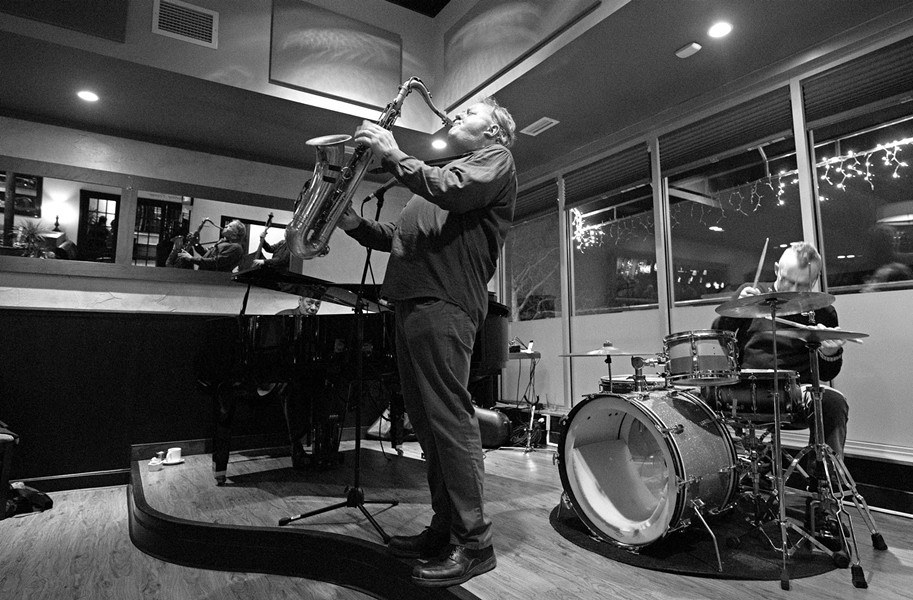 Scott Elmquist Roger Carroll and Chez Roué perform at Selba in the Fan, where live music is a regular event during dinner hours.

If "Mad Men" helped give rise to the current fascination with cocktails, midcentury modern ranchers, and naming girls Betty, what a shame it also didn't bring back the kind of restaurants where people could enjoy live music with a nice meal.

Look back at movies from the '50s and '60s and you'll see couples going out to eat in places where a pianist tickles the ivories or a trio croons standards. It was all very civilized with the decibel level of the music kept to one that didn't inhibit conversation while dining. The counterculture movement of the late '60s ensured that those establishments became associated with squares, meaning they all but disappeared. But like tortoiseshell glasses, they hold an appeal for generations that didn't experience them the last time around.

Selba has picked up that banner and run with it, scheduling music every night it's open, with an occasional pass on Tuesdays, wisely having bands start at 7 p.m. during the week and 9 p.m. on weekends. With a grand piano tucked into the alcove by the front window facing Cary Street, musicians have a dedicated space to face the dining room and entertain.

On a recent Wednesday night, a nearly full dining room catches the Curtis Swisher Trio delving into the great American songbook with such nuggets as "Days of Wine and Roses" and "The Way You Look Tonight." Keeping things light and breezy, Swisher introduces "I Wanna Be Around (To Pick Up the Pieces)" as "the ex-wife song." That attitude coming from the band is the key, providing a swinging, old-school vibe that takes its cue from the Rat Pack era.

One night it might be the New Orleans-inspired jazz of Roger Carroll and Chez Roué, another the Anthony Dowd Trio, featuring local bass player extraordinaire Cameron Ralston, who spent much of last year touring with hometown-boy-made-good Matthew E. White. Some nights it's guitarist and Virginia Commonwealth University alum Alan Parker playing with the Jason Jenkins Trio. Come Saturday, things can get funky with the Kung Pao Quartet shaking it up with covers of James Brown and the Ohio Players. You can check out the music schedule online if you're particular about whom you want to hear.

When it opened in summer 2011, Selba scored higher points for its design — That garden room! A smoking lounge! — than it did for its menu. Wisely, it has continued to fine tune during the past few years, including more gluten-free options than ever. Jazzing up the quinoa cakes ($14) is SausageCraft chorizo and warm Mexican spices, but it's the cilantro crème fraîche and corn relish that soar. Cumin-seared jumbo diver scallops ($11) over red pepper coulis and basil oil are adorned by little pillows of cooked apples; the entree version ($25) comes with coconut fried rice and Thai shrimp cream sauce.

My posse inhales a wild mushroom tart ($9) of oyster, shiitake and white mushrooms in puff pastry, in no small part because of the sherry caramel and richness of the mushroom sauté. A welcome departure on the sage sausage flatbread ($11) is carrot puree instead of tired tomatoes, which works with fontina but not so much with brie, and the flatbread sports both. Succeeding without even trying is smoked salmon dip ($10) with pita points, a worthy vehicle for the wicked rich dill and chive mascarpone-based dip. Baked pasta ($18) gets a boost from lamb, spinach and firm mushrooms in a plum tomato sauce nestled under a blanket of mozzarella and feta, a hearty dish on a cold winter evening. Falling flat is a small plate of crispy Brussels sprouts ($7), the sprouts tasting as dated as the oil they are cooked in.

By showcasing the talents of local musicians during prime time, Selba takes diners back to an era when it was enough to be in the here and now, eating dinner and listening to music without any thoughts of Tweeting or Instagramming — back to the days of wine and roses. Don Draper would approve. S