How the makers of Navy Hill, a light soda and tonic mixer, got it into Richmond’s bars, markets and beyond

Kate Thompson Navy Hill “sonic,” a blend of soda and tonic, is available in bars and markets all over the Richmond area.

Maybe it was the high altitude that provided the inspiration.

Katie Williams and Jenny Lucas were enjoying the view atop Quirk Hotel's rooftop bar and trying to decide what to sip. Considering their options, they deemed a vodka tonic too sweet, while a vodka soda wasn't quite enough. Their solution was to ask the bartender to combine the two mixers, which the wise bartender immediately dubbed a vodka sonic.

"In that moment, Navy Hill was born," Williams says of the company she and Lucas founded to create a premium mixer that blends club soda and tonic water. Not content just to come up with a new kind of mixer, the duo also focused on making its mixer a healthier alternative to the competition by adding electrolytes and making it all-natural, free of high fructose corn syrup and low-calorie.

Prior to starting Navy Hill, Lucas owned a children's clothing business and Williams was a residential real estate agent. While both had experience in business, neither had any in the food and beverage world. This made the journey challenging, but also, they say, interesting and fun.

The first step in fleshing out the idea to make it a reality was contacting a local food scientist to help them formulate the product. Next were meetings with beverage directors from local restaurants to get feedback and ideas. As for the branding and packaging, that was a labor of love. "We worked with a really talented graphic designer who understood what we were looking for and we feel like she nailed it," Williams says.

Once they had product in hand, they reached out to local retailers such as Libbie Market and Ellwood Thompson's Local Market and growth took off from there, eventually earning shelf space at Fresh Market, Whole Foods, Wegmans, ABC stores and Stella's Market. Seeking a locally meaningful name, the duo looked to Richmond's history as the city of seven hills, with Navy Hill being one of the original seven.

"We wanted to pay tribute to the city we love," Lucas says. "Richmond has been an incredible place to launch a brand and we have been so thankful for the local support."

From the start, their goal was simple: to create a product that offers a better-for-you alternative to a full tonic. "People love tonic, but it can become too sweet and overpowering, while club soda can be flat and underwhelming," Williams says. "This was an idea that was so simple, yet so understandable and interesting."

The proof is in the number of bars incorporating their product into libations. Tang and Biscuit just added the Navy Strength, a rum-and-fruit concoction served in a Moscow mule mug, and another called the Juniper Isle, which uses Belle Isle Moonshine. Brenner Pass and Secret Sandwich Society all use Navy Hill behind their bars, and it's available in espresso tonics at Lamplighter Coffee Roasters and Ironclad Coffee Roasters.

Tang and Biscuit general manager Carrie Dudley says the "sonic," which has been available behind the bar since June, quickly grew in popularity.

"I think it just adds a different option," Dudley says. "It adds a little bit of flair to our drinks that you can't normally find on its own with just the soda or just the tonic."

Navy Hill's soda and tonic blend is available in original, ginger and juniper, with the original reminiscent of a full tonic, but much lighter and infused with grapefruit, cardamom and lemon grass. The juniper version was inspired by the iconic gin and tonic, highlighted by the same juniper berry found in gin. Ginger is a refreshing, lighter alternative to ginger beer, making it a solid option for a Moscow Mule. Last summer Navy Hill launched a classic club soda for people who don't drink tonic.

Naturally, both Williams and Lucas have a favorite way to drink their sonic. Williams likes to keep it simple, using vodka — preferably Square One Organic Vodka — and juniper for her go-to cocktail. For Lucas, it's all about combining tequila with the original flavor and a splash of grapefruit juice, a sort of healthier version of the classic Mexican cocktail, the Paloma. 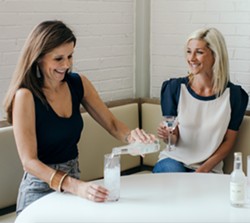 The women say they were energized about creating a really cool brand and a bottle that would look great on a home bar. Just don't expect them to have a five-year plan quite yet.

"We're taking this day-by-day and sometimes it feels like we can't see to next week," Williams says with a laugh. However, Navy Hill products are currently in 26 states and its founders intend to continue to grow the footprint, brand awareness and sales.

One thing they know for certain is how much they're relishing being in business for themselves, exercising creativity and independence.

"It forces you to look at the big picture instead of being confined to a certain role," Lucas says. "As a small company, you have to wear all the hats on a daily basis and learn every aspect of the business. That wouldn't happen working for someone else."