Songs of the Spirit

One of America’s renowned poets partners with a former Jazz Messenger on a collaborative album of Black sacred songs. 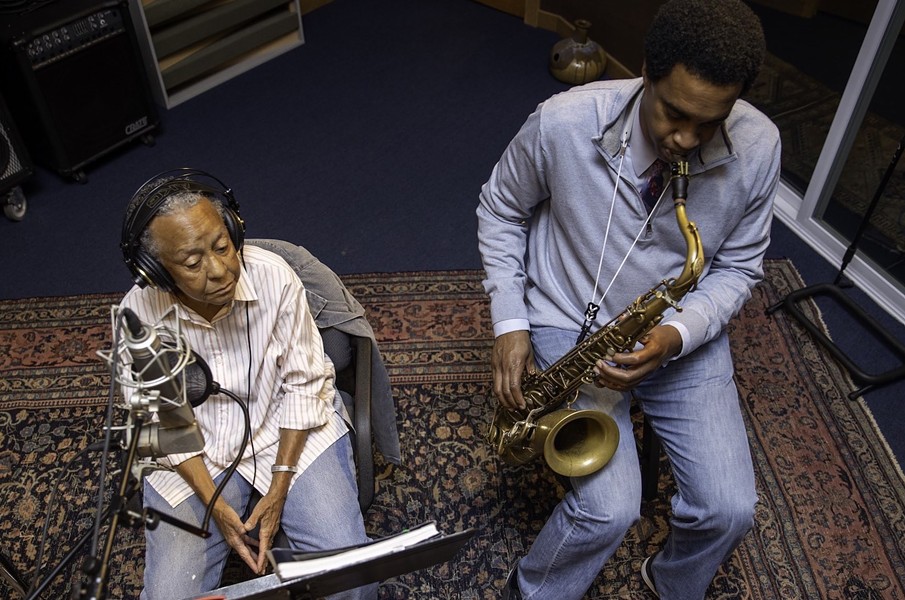 Shaban R. Athuman An image from the recording session for "The Gospel According to Nikki Giovanni," by acclaimed poet, activist and scholar Giovanni and tenor saxophonist Javon Jackson.

“Our people were not uneducated, they were un-degreed,” says iconic poet and Virginia Tech English professor, Nikki Giovanni, seated at an oak table in her dining room, which is brimming with art and books, on a drizzly day in Christiansburg, Va. “We had the enslaved people finding a way to come together, and we call it church. … But what it is, is community.”

An acclaimed poet, activist, and scholar, Giovanni has made Virginia her home for the past 20 plus years, living in the Southwest part of the state, outside the fray of the capitol city or the intellectual hub of Charlottesville, where many other scholars of her prominence make their homes. She’s "an Appalachian," a woman born in Tennessee who feels kinship in the small communities of Virginia's Blue Ridge Mountains.

In February, Giovanni and Javon Jackson, an accomplished tenor saxophonist and jazz studies instructor at the University of Hartford, released a collaborative album, “The Gospel According to Nikki Giovanni,” featuring reimagined renditions of centuries-old spirituals and hymns, selected by Giovanni and reinvigorated by Jackson’s passionate playing.

Jackson says he sees their album as a creative way to share American history with younger generations. In response to the question of why they chose spirituals, Giovanni asks, "Why not?" She points to the strong community bonds Black people forged while under the yoke of slavery, and the musical art form they created in the process, called spirituals.

“They are the story of America,” says Jackson, who at 21 joined legendary drummer and bandleader Art Blakey’s Jazz Messengers. “[Spirituals] speak to so many aspects of lifestyle that we live in America, which at that time was suffrage, was oppression, was brutality. But out of that, there was still a sense of hope, belief, and optimism that things would get better.”

Giovanni explains that “nobody would ask, ‘Why did we learn to read Little Red Riding Hood?’ … We don't ask that question. Because we accept the fact that we ought to know,” she says, her dark eyes piercing, knowing. “I'm saying you have to accept the fact that this too is a way, as Javon says, of telling the history.”

The poet and author of dozens of books is a cultural authority on “telling the history” and being a history-maker in her own right. In the 1960s, Giovanni helped found the Black Arts Movement: a celebration of Black literature, visual arts, music and drama, as well as “the cultural section of the Black Power movement in that its participants shared many of the ideologies of Black self-determination, political beliefs, and African American culture.”

The pair’s creative, musical collaboration germinated in February 2020 when Giovanni, at Jackson’s invitation, spoke to students at the University of Hartford’s Jackie McLean Institute of Jazz, where he is director.

“She was supposed to sit with the dignitaries, but she went right over and started to sing,” recalls Jackson, a tall man who sports a three-piece, gray suit and a neat Afro. He has driven up from Charlotte, where he’s playing a gig the next night, to participate in this interview. He and Giovanni smile in unison with the memory of the occasion, when one of the world’s best-known poets mingled her voice with Jackson’s students and colleagues in what he describes as a “jovial, warm moment.” 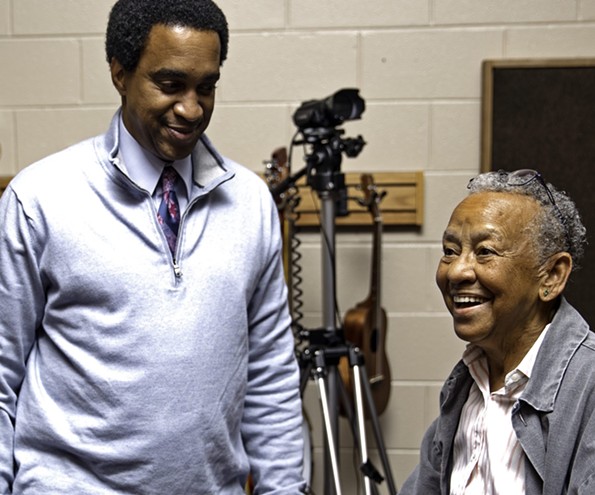 During the event, Jackson says they listened to recordings of various musicians performing spirituals, an art form that “has its roots in the informal gatherings of African slaves in praise houses and outdoor meetings called brush arbor meetings, bush meetings, or camp meetings in the 18th century,” according to the Library of Congress.

Jackson remembers them hearing Charlie Haden and Hank Jones, a great jazz duo, playing spirituals such as “Steal Away.” “And [Giovanni] was commenting on how much she loves spirituals, and I love spirituals and obviously jazz. She loves Billie Holiday, she loves Lester Young, she loves all my heroes,” he says.

“One of [Jackson’s] students, I think his name was Michael, when I finished my talk and everything, there was a grand piano, a baby grand,” Giovanni says, her voice excited and halting. She spreads and flutters her fingers on the dining table, now serving as an invisible piano. “And Michael sat down and played, and we [were] all singing together. You see, I can’t sing … but that’s what I like about spirituals, you don’t have to be able to sing.”

By the end of the day, the pair had formed a friendship and hatched a plan: They would work together to create an album that celebrated the music of their ancestors, with the express aim of educating others about spirituals.

“I just don’t like the idea that kids – youngsters I should say, younger people – don’t know this music and what it’s teaching us, and how it’s comforting us,” says Giovanni. “And anything that can help you get through 200 years of what we’ve been through has to be important and good … and still very, very useful. It’s comforting.”

Giovanni selected the spirituals for the 10-track album, and a little more than two years after they first met, “The Gospel According to Nikki Giovanni” was released on Jackson’s label, Solid Jackson Records, on Feb. 18. One of the tunes included is not a spiritual, but just as sacred: “Night Song,” a standard by groundbreaking jazz pianist and vocalist Nina Simone, is, to Giovanni, the most personally meaningful song on the record.

“I had the pleasure of hearing Nina sing it many times,” Giovanni says, a note of nostalgia edging her words. Giovanni, who says that Simone was “a dear friend,” sings the tune on the album, a musical departure from her written wordsmithery.

For Jackson, the most meaningful melody is “Wade in the Water,” the third song on the album.

Ultimately, what people glean from the album is their own affair, says Jackson.

“We put it on the table … for the next individual to grab the plate, or to eat the food that we leave,” he says. “So in a way, it's kind of none of my business … I would like people to enjoy it, and to appreciate it and like it, but that's not my impetus. My impetus is to share something that I feel strongly about.”

Giovanni’s own hopes for the album’s impact exceed today’s listeners -- and even the earth’s atmosphere.

“I am a space freak,” she says flatly, no hint of apology in her tone. “If I could go into the galaxy, I would want to take a saxophone. Because if there’s one thing the entire galaxy would respond to, it’s the saxophone. Everybody loves the saxophone. And I’d just ask Javon to play a few notes, and whatever lifeform is out there, they would come and say, ‘Now what is that?’ … And I'll answer it, ‘Oh, this is a spiritual.’

“That's what my people did to get through.” Listen to the “The Gospel According to Nikki Giovanni” for free here, and watch Giovanni and Jackson speak about the project in an episode of VPM News Focal Point here.