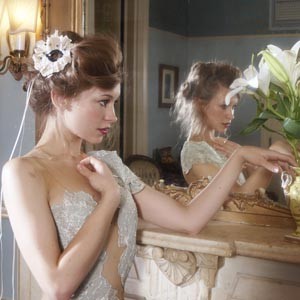 Whoever said the vinyl album was dead forgot to tell Joanna Newsom.

The 28-year old virtuoso harpist has been one of the top-selling independent artists of recent years, and her latest, “Have One on Me,” is a sprawling triple disc featuring more than two hours of the singer and songwriter's complex, polyrhythmic playing and poetic lyricism, recalling everything from Laurel Canyon '70s folk to an Appalachian-flavored BjArk chamber ensemble.

It's difficult to catch up with the Northern California native between her touring, fashion modeling and time spent with boyfriend, “Saturday Night Live” charming doofus Andy Samberg (Style Weekly reached her via e-mail). Newsom soon will bring her band, featuring two violins, trombone, drums, tambura, a long-necked lute, guitar, kaval, a Baltic flute, recorder and banjo, to the National for a concert she says will be “kind of a dance-y show, actually.”

Style: You had a “Simpsons” media alert this week (denying a rumor that you were appearing on the show). Are you holding out hope for a friend-of-Lisa episode?

Newsom: Sure. But, you know, at this point, it's like Homer said in the depths of his banishment from the kingdom of Rohan: “Look for your friends, but do not trust to hope. It has forsaken these lands.” Do you know what I mean?

Somehow I do. A New York Times writer observed that you had the most obsessive fans since Bob Dylan. Do you have an ideal listener in mind when writing?

I'd say, polio-stricken, titled scion of a storied and crumbling dynasty. He/she would also ideally drive a Segway.

You told Time magazine that you feel a gap between what you hear in your head and what you are able to formally compose. Do you prefer to collaborate, or do you hope to close that gap?

Yeah, it's the arrangement for other musicians that I struggle with — ensemble work. My abilities in orchestration are still so rudimentary that I need to work with other arrangers to make things sound the way I want. But I do hope to learn to do more. It's frustrating sometimes. I've always has trouble ceding creative control of any element to other people. It just takes so much time, to have the conversations required to bring a collaboration into a place where both people are seeing and hearing the same thing. And I have such emotional attachment to all the songs that it can be a tense and charged process. But I've also been privileged to work with amazing, inspiring people, great teachers. Van Dyke Parks, Ryan Francesconi … I wouldn't replace those collaborations for anything. Even if I was a whiz kid at notation, I couldn't write in the same compositional voice as either of them.

Early on, critics' comments about your childlike vocals were irksome to you. … Now with this album people are saying your voice has changed again. How has it grown to your ears?

I don't so much see it as a decisive change between albums as I do a continuum of small, instinctive adjustments and recalibrations. The performing is what changes it. I never properly “learned” to sing. But I think your own body teaches you how to do these things over time. Singing is just an act of navigation and sound propagation within the resonant cavities of your skull and chest, and all the attendant musculature. Spelunking those recesses, over and over again, for many years, naturally must lead to an ability to jump around without needing to look as often, to memorize the architecture and topography in a way that becomes intuitive. People can attach an emotional element to that ease and quickness, but that's all it is — familiarity with your own bones.

The new album's title track refers to a romantic Irish-born dancer who lived in Northern California in the early 19th century, Countess Lola Montez. What fascinated you about the creator of the spider dance?

I just made things up about her — things that I find personally to be true. Intuitive research, I guess, for the sake of writing. But I think that's the saddest and richest thing about mortality — you leave behind something fixed, limited, distorted, degraded by spectatorship and projection and speculation, and ultimately immovable, unsympathetic, inscrutable: The recorded life of a person now dead becomes equal parts Ozymandias and Rorschach.

Being in Virginia, so close to rich Appalachian music history, I have to ask if any Southern artists had an influence on you?

Is there any musical artist you would most love to reinterpret or play?