Tristin Lowe's "Mocha Dick" is the whale in the room. 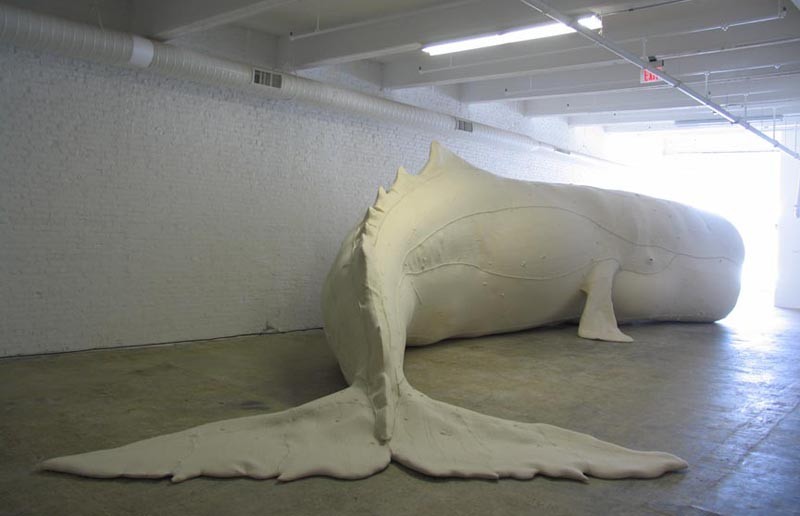 You don't have to be a fan of Herman Melville's "Moby Dick" to be captivated by Tristin Lowe's 52-foot-long sculpture, "Mocha Dick" — the actual length of a real-life albino sperm whale.

Though having the 1851 epic novel as context helps, the narrative on the entrance wall of the Virginia Museum of Fine Arts' second-floor 21st Century Gallery provides crib notes as the behemoth gently bending around a concrete column grabs your attention, and completely engages you while you walk 360 degrees around it.

Lowe, 45, compared the beginning of his two-year planning for "Mocha Dick" to the quest for the whale that terrorized early 19th-century whaling vessels near Mocha Island in the South Pacific: "I was embarking on a journey ... a bit like Ishmael's search for the unattainable, which I think is the real subject of the ["Moby Dick"], not Ahab's quest for revenge — or even the whale itself."

Lowe's remarks, when he speaks at a seminar at the museum Oct. 27, are sure to illustrate what he calls his "reckoning with the mythic mammal," his knowledge of Melville and the author's contemporaneous writers as well as his research into maritime history and the process of creating "Mocha Dick." Lowe identifies with the New England seafarer, Jeremiah Reynolds, whose account of sighting the elusive behemoth was published in 1839 in Knickerbocker Magazine.

"Jeremiah didn't know at first what he was looking at," he says — "and, of course, it turned out to be the rogue bull whale."

Going from awesome wonder to a full-scale reproduction was no small task, especially in six months' working time with a team of technicians, apprentices and a project manager at the Fabric Workshop and Museum in Philadelphia. If you've ever made a simple sheath dress (or sewn a Boy Scout's leather project), imagine the complexity of building this form — the whale's armature or understructure — and fitting an inflatable vinyl skin over it, followed by industrial wool felt that gives a credible texture, complete with errant wool hairs, of the whale's skin.

The steps in the process began with a vinyl pattern held together with tape and stitching, then a calculation of details such as the number of fabric sections needed (11, each more than 6 feet wide, on the main body), the amount of fabric consumed by seam allowances and the strategic placement of zippers. Next, the artist planned the use of ropes as buttressing or corseting on the inside of the form to make the musculature anatomically correct, and counted on gathering or pleating fabric around curves. Don't forget the separate sections for the dorsal and pectoral fins and the tail. And to be sure all of this will work, Lowe made a scale model first, after many drawings.

You just have to ask if there weren't a simpler way of doing this.

"I did briefly think about using flexible fiberglass and rods for a tension and compression system," the artist says. "But that wouldn't really be like a whale's skin."

Fitting a 52-foot whale also presented a challenge to museum curator John Ravenal, who'd shown one of Lowe's colossal, inflatable sculptures when he was curator at the Philadelphia Museum of Art. Although it initially appeared that the only spaces VMFA had for the giant sperm whale were central public spaces such as the museum's atrium, Ravenal realized the sculpture, when installed, had a natural curve that allows it to just fit into the 21st Century Gallery.

The museum was smart to mount swatches of the industrial wool on two of the galleries' walls with signs that tell visitors to touch the samples, not the whale. Getting up close and personal with the sculpture reveals clusters of handcrafted barnacles appliquéd to the whale's body as well as stitches zigzagging across its surface to resemble the scars of Mocha Dick's battles. The noise of the humming fan inside the inflated whale — with a little imagination on your part — mimics the whale's breathing deep under the sea.

The experience just might motivate you to travel to the Philadelphia Museum of Art to see Lowe's installation of his newest soft sculpture, the 12-and-a-half-foot diameter moon, entitled "Lunacy." S

Tristin Lowe will appear at a talk with John Ravenal Oct. 27 at 7 p.m. at the Leslie Cheek Theater. $8 admission; $5 museum members. Lowe's "Mocha Dick" is on view daily through Nov. 27 in the 21st Century Gallery at the Virginia Museum of Fine Arts, 200 N. Boulevard. For information visit vmfa.state.va.us.