Thanks to Marcie Dodd's Wicked Witch, green is the new black. 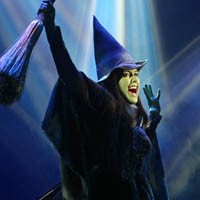 Hold onto your pointy hats. The hit musical, “Wicked,” flies into Richmond's Landmark Theater on March 10. If national box-office records are any indication, the show should take the town by storm, or even a tornado. This three-time Tony- and six-time Drama Desk-winning show is about what happens between the witches of Oz before Dorothy drops in, and how appearances can be deceiving.

Marcie Dodd stars as Elphaba, she of the emerald-colored skin, and better known to fans of the 1939 film classic as the Wicked Witch of the West. As she'll tell you, it's not easy being green. Elphaba is shunned for being “different” though she's smart and good-hearted. But there are some other things about the role that make it a physical and emotional challenge for the actress who portrays her eight shows a week on tour.

Dodd shares her insights and observations on playing such an iconic character.

Style: Elphaba is such a plum role. She has such powerful songs to sing and is such a strong character. What's it like to get onstage and sing those amazing songs every day?

Dodd: It's really exciting. Stephen Schwartz really knew what he was doing when he decided to make this musical rather than taking it in other directions. … The music is so much the heart of this show and the lyrics and the underscoring — there's so much underscoring in the show that people don't realize it's happening because the scenes are happening — and it all helps tell the story. To be able to sing the songs every night is just, it's just incredible. It's really hard music to sing but I wouldn't have it any other way. It is just some of the best music to sing out there right now — especially for women.

What's the most difficult thing about playing this role?

I would say the physical aspect of it. To be able to go there emotionally and physically every night, it really takes a toll on your body. It's big music to sing. It's some heavy costumes to wear. Big props you're carrying around. I think if anything, it's a physically difficult show. We call it a three-hour marathon because you are really out there most of the show with a few short breaks in between and the breaks that you get you're getting repainted green and touched up or brushed or changing costumes, so keeping your body rested is probably the hardest part.

Different people may perceive the show differently just as people perceive qualities in politicians differently. How does that affect the overall gist of the show?

That's what's so great about our show, is that yes, there is that plot line that appearances are deceiving, that they're not always what they seem. But there's a lot of other things you can take away from the show too. You know, the story of the girl's friendship and the politics and the underlying drama to it all. It's kind of cool that each person takes away something different, even like, saving the animals.

What is it like playing the person with all the right intentions who just gets pummeled with negativity and misunderstanding?

It's pretty intense. It's a wonderful feeling because you feel the energy from the audience rooting for the underdog, and that kind of combats the energy coming from the other characters onstage. I was saying to a friend the other day that the balance helps me because it gets taxing every night, you know, for people to just tear you down.

I think one of the best things is the story we get to tell. … that there is always that friend out there who will accept you for being a little bit different. That friendship between Elphaba and Glinda really helps people see that you don't have to be alone, you don't have to be an outcast. Just find strength in who you are and the beauty of that, I think.

“Wicked” plays at Richmond's Landmark Theater on March 10-28. For information visit jamtheatricals.com or by calling 343-0144.