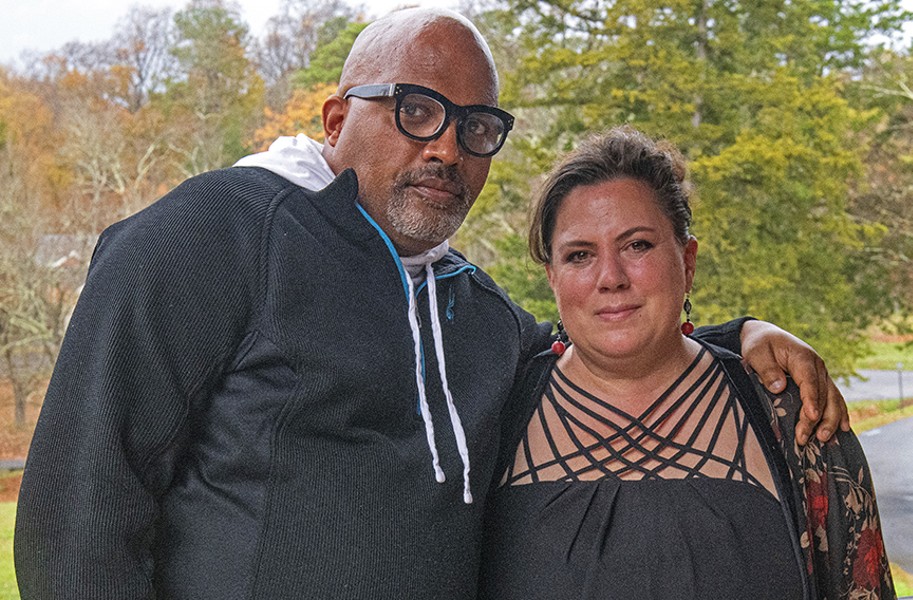 Scott Elmquist Micheal Sparks and Kate Houck are the founders of the Underground Kitchen, known for its roving experiential dining. They recently finalized a lease on a new headquarters in Shockoe Valley and found a lovely pop-up location on River Road.

Roslyn Retreat Center is the largest financial gift ever received by the Episcopal Diocese of Virginia. And a gift it is, resplendent with the kind of calm, rolling beauty the likes of which we city folks may only dream of.

At 8727 River Road, Roslyn totals more than 180 acres, with swaths of verdant land dipping right down to the edge of the James. From certain vantage points you can even gaze upon the Kanawha Canal.

The property originally served as a horse farm, the farmhouse is still standing tall, now used for offices and meeting space, before Annie Rose Walker, a River City denizen and downtown dweller, took over. She donated the acreage to the church in 1934.

“She would use this as her personal retreat,” says Roslyn board vice chairman and treasurer Patrick Getlein. “She’d host salons out here, bringing in preachers and scholars who would hold lectures and gather on the lawn.”

Walker would also feed her guests, bringing them together around a table to continue sharing ideas. “In many respects that has become our mission, that has always been the mission of the place,” Getlein says. “Which is how we got to working with Underground Kitchen.”

The sexy sojourning kitchen had to halt operations when the pandemic hit – no more popping up with champagne-fueled, multicourse meals in secret locales around the country. Founders Micheal Sparks and Kate Houck had to decide what to do with the months ahead and their lineup of indefinitely postponed events.

Sparks says he called his mother, “I was crying. I told her ‘We lost everything.’” Her response? “’This is going to get really bad before it gets better – you need to figure out a way to help people.’”

So they did. Enlisting a roster of talented chefs and using all the donated food from temporarily shuttered kitchens, the team got to work. It focused on homemade soups and freshly baked bread. At the height of its efforts it was making and delivering upwards of 3,000 orders of soup a week.

Underground Kitchen’s new nonprofit branch, UGK Community First, originally operated out of nine commercial kitchens in Episcopal churches around the city. The heartbeat of Community First was always the fully equipped kitchen at Roslyn, though, which Sparks says was running nearly 24 hours a day.

As Community First grew, Houck and Sparks decided that procuring a more centrally located, downtown kitchen would help them best serve those in need. Just last week they finalized a lease with the Annie Giles Community Resource Center in Shockoe Valley, which will serve as the new headquarters for both the nonprofit and the for-profit branches of UGK.

While Sparks and Houck have found success in their pivot towards philanthropy, the fate of the wildly creative fine-dining branch of Underground Kitchen is not to be sealed in pandemic doom.

Where before home was wherever they may roam, they had to find a new, permanent pop-up location: The 100-plus acre Roslyn Retreat Center.

“The Episcopal Church is all about breaking bread and bringing people together,” Houck says. “To be anchored to a spot like this, a spot on the river – it’s amazing. Especially at this time in history with all the social unrest, we have a chance to bring people here and talk about the things that bring us together rather than what tears us apart.”

Underground Kitchen already has held two fabulous, socially distanced fetes on the property — a wine tasting with Virginia sparkling winemaker Claude Thibaut and an afternoon of opera on the green, followed by a multicourse dinner, with many more to come.

“It’s very exciting for us,” Getlein says. “Their events and community engagement connects us to the community in ways we haven’t been able to before.”

The irenic retreat center is – and has been for decades – open to anyone to enjoy, not just those who are affiliated with the Episcopal Church. Whether you want to book one of the lodge rooms for a solo retreat or would like to rent out the all-glass enclosed bishop’s chapel, you need only give the center a call.

Roslyn is still hidden, though, tucked away on River Road, a mystery to most. With the help of UGK, Getlein and the board are hoping to change all that.

“This budding partnership is going to help us all fulfill our mission,” says Getlein.

This Thanksgiving, Community First is hoping to provide 4,000 meals to people around the city who do not have a table at which to gather. You can help by donating $10 for one person’s meal, or $40 for a family of four.

Back to The Holiday Almanac