Something About Miss Halsey

The vices of “Bad Teacher” are now habits. 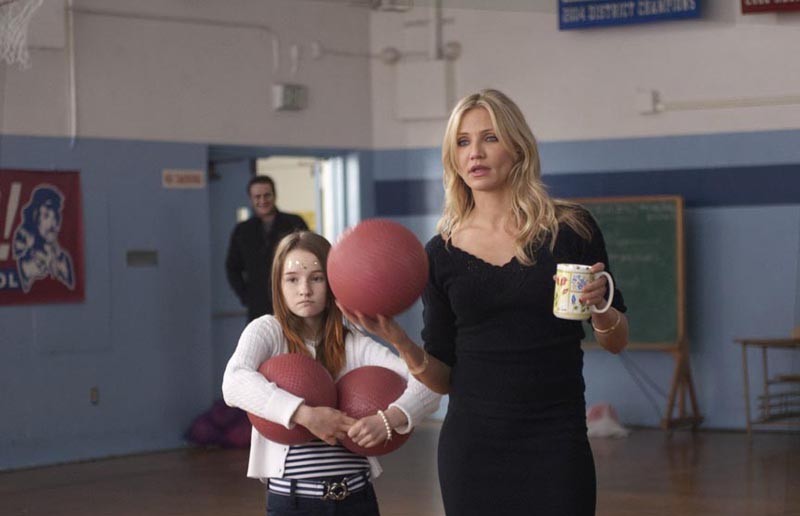 Cameron Diaz got her big break as the romantic interest in a movie many people consider the best raunchy comedy ever made, and 13 years later she’s the lead in of one of the least remarkable.

“Bad Teacher” has been almost universally panned as a terrible misfire. Viewers might be surprised to find that it is in fact entirely ordinary. These kinds of movies are the norm now, their style and methods as familiar and predictable as an Elvis picture from the 1960s. Based on opening-weekend ticket sales and the success of similar fare such as “The Hangover” movies, their popularity hasn’t waned. The audience at a recent “Bad Teacher” screening laughed often and loudly. It’s a film written with the polish of an eighth-grade essay, but it has great poop jokes, which is all that seems to matter.

Diaz plays middle-school teacher Elizabeth Halsey, who leaves the job she loathes to marry a rich guy. When he doesn’t work out, Elizabeth is back at the school, where she rolls her eyes at all the other well-meaning but less attractive teachers who take their jobs seriously. Elizabeth doesn’t. Her new plan is to save enough money for breast augmentation surgery, which will allow her to catch another rich guy.

Now, technically, this makes Elizabeth more gold digger than bad teacher, doesn’t it? Perhaps unsurprisingly, the movie doesn’t bother to explain what’s special about her dislike of teaching. She’s only a bad teacher in that she doesn’t want to work, playing inspirational, school-themed films like “Lean on Me,” for example, instead of leading her class. As a repeated gag the video bit is somewhat funny, and even follows the comedy rule of three, but the rest of “Bad Teacher” is a grab bag of naughty humor that’s starting to seem less and less outrageous. While the movie goes along it veers wildly, its intelligence always hovering, however, at the “Saturday Night Live” skit level, where characters have names like Miss Squirrel (Lucy Punch) to indicate their perkiness, and the math teacher (Justin Timberlake) is a straight-arrow, bow-tie-wearing nerd.

In real life, bad teachers are petty tyrants and incompetents. They do all kinds of things ripe for ridicule. It may not surprise you either to learn that “Bad Teacher” isn’t the least interested in real life. Nor in being really bad. When we’re reminded that Elizabeth is “bad,” it’s smoking a bowl in her car or wearing something slinky. Hardly teacher-specific, or even all that bad.

The movie was directed by bad filmmaker Jake Kasdan, who’s overlooked the opportunities of setting his movie in a high school, or letting his little wards notice Diaz’s legs, thereby giving Elizabeth the opportunity to be really bad. The boys only get hot for teacher when a specific scene calls for it. This isn’t moviemaking but a stringing together of gags with the least effort possible. It’s no wonder the actors in most scenes look like they’re reading their lines from cue cards.

The well-worn shtick here is that every character is a weirdo of one sort or another, although no one notices. Occasionally you’ll get an inventive bit such as an extended dry humping sequence, but more often the punch line is an unfunny, square thing the character is forced to do or say, which is supposed to be funny only because they do or say it. If you’re having trouble following the logic, consider the name of the teachers’ musical group, Period 5. Why go to the trouble of thinking up clever jokes when you can get goofy characters to think up awful ones and have that be the joke? After a while it starts to feel like, although it may sound crazy, the filmmakers really aren’t trying very hard.

And why should they? This seems to be the kind of movie audiences want. It reminds me of “Role Models,” another recent child-care film starring Seann William Scott and Paul Rudd. I walked out at the end of that screening, scoffing that it would be in the video store within a week. Then it raked in more than $90 million worldwide. According to Box Office Mojo, “Bad Teacher” did opening weekend business of more than $32 million, or about $11 million more than “Role Models.” If these movies teach us anything, it’s that you may go broke underestimating fellatio humor and bare breasts. (R) 89 min.