Movie Review: "12 Years a Slave" reveals some of the worst realities of American history — but the book is better. 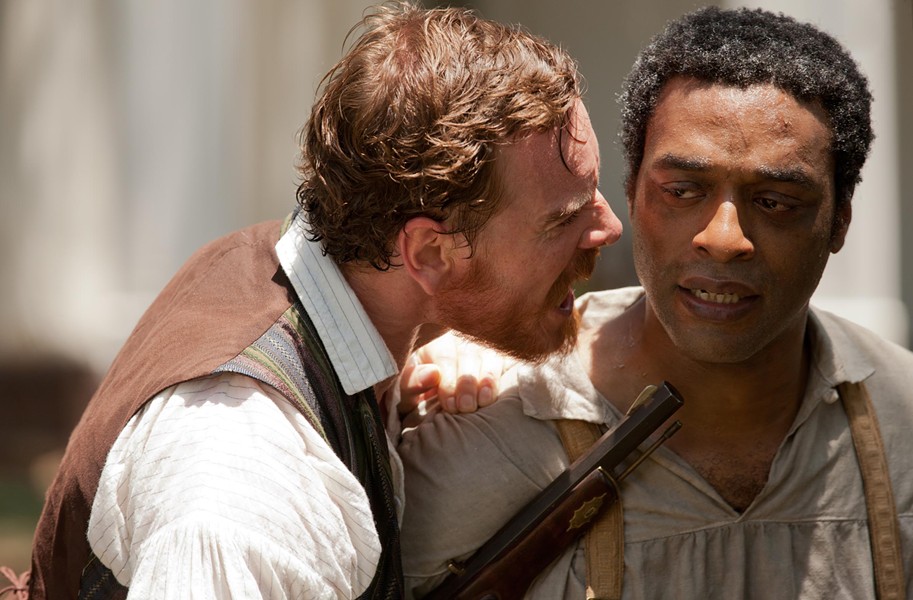 Fox Searchlight Pictures In a film generating Oscar buzz, actor Michael Fassbender plays a particularly cruel slave owner, and Chiwetel Ejiofor stars as a free black man who's kidnapped and sold into slavery in the South.

The director Steve McQueen began his career as a video artist. His films, "Hunger," "Shame" and, now, an adaptation of Solomon Northup's 1853 memoir, "12 Years a Slave," demonstrate a tendency toward intense stylization. This tendency creates some unique, powerful images, but also problems — and in "12 Years a Slave," both are evident and even exacerbated by the context.

The film recounts the real-life travails of Northup (Chiwetel Ejiofor), a free black man living a quiet, prosperous life with his wife and children in the pre-Civil War North before being kidnapped and sold into slavery. Sent all the way to New Orleans, he spends the 12 years in abject misery, witness to innumerable horrors, including the separation of mothers from their children and the brutal and seemingly endless violence inflicted on slaves by some of their masters.

As both book and film demonstrate, not all slave owners were unnecessarily cruel. Solomon initially is purchased by a comparatively kind farmer named Ford (Benedict Cumberbatch), but Ford's financial problems, along with Solomon's fight with a foul carpenter named Tibeats (Paul Dano), force Solomon's sale to a cotton plantation, where the work is much harder. The plantation is owned by Edwin Epps (Michael Fassbender), whose temperament Simon Legree might have considered unusually noxious and brutal. It is here where Solomon spends most of his life in captivity, and where we learn just how inhuman slavery could be.

Those who haven't read Northup's account will find McQueen's work a competent, even provocative visualization of slavery. McQueen seems genuinely interested in crafting a realistic account, to show slavery in all its oppressive cruelty, but also to place it us in the context of an alien perspective. Especially interesting is McQueen's visualization of the enslaved's treatment as property — herded, chained and muzzled like livestock.

Equally compelling is the mindset of the enslaver. Sometimes McQueen demonstrates this with bizarre and lurid scenes, as when an avaricious slave trader (Paul Giamatti) arranges his wares in a luxurious home as if exhibiting fine art, or when (seemingly) nice townspeople walk past rows of black men who look like they're about to model for an S&M website. Other more subtle but equally powerful examples include a plantation mistress (Sarah Paulson) who offhandedly tells a grieving, newly acquired slave (Adepero Oduye) not to worry, "you'll soon forget your children."

In McQueen's telling, the perception of the slave by the owner as mere chattel is so offhand, casual and absolute that it can be mistaken for burlesque. The master takes for granted the slave's destiny to be worked to death as easily and nonchalantly as we take for granted the hog's destiny for grocery-store bacon.

Although more simply told, Northup's book goes much deeper. In its menagerie of images the film misses Solomon's point of view. Writing in the first person, Northup not only gives a much fuller account of the backbreaking labor expected of the slave, but also analyzes and identifies with his enslavers. As cruel as they are, he recognizes how normal their cruelty must seem to them, being raised since childhood to accept a slave's fate.

McQueen's film never conveys Solomon's point of view, not beyond hating his enslavement and wanting to escape. It isn't a problem of acting or striking visuals, which are plentiful. The film just fails to make a complete person out of its protagonist, and it misses a good deal of insight as a result. We only know Solomon as an audience surrogate, witness to the horror and degradations of his time and place.

At the same time, McQueen pulls his punches with those horrors. In more than one scene we watch Solomon and his fellow slaves leisurely eating breakfast in the morning and calmly returning from their labor in the evening. In his book, Northup makes clear a cotton picker was expected to be in the field and ready by daylight and not allowed to stop until nightfall, at which point supplementary work began. It's possible McQueen left out these and other even more outrageous details for fear that audiences simply wouldn't believe them.

Though a little slow and missing some elements, "12 Years a Slave" definitely is worth seeing, if only because of its rarity as a cinematic interpretation of the South's "peculiar institution." It's essentially a strong and moving story, but only the book does it real justice. (R) 133 min. S