Solange Knowles at Fridays at Sunset 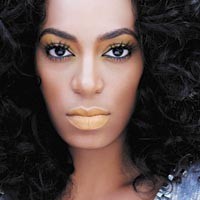 On the opening track of her 2008 album “Sol-Angel and the Hadley St. Dreams,” R&B singer Solange Knowles addresses the elephant in the room — she is not Beyonce: “I'm not becoming expectations / I'm not her and never will be / Two girls gone in different directions / Striving toward the same galaxy / Let my star light shine on its own / No, I'm no sister, I'm just my God-given name.” While her older sister may lay claim as one of the most recognizable personas in modern pop culture, Solange's musical identity anchors itself on the icons of the past, delivering playful and carefree material steeped in classic Motown and late-'60s soul. Whether giving a nod to “What's Going On”-era Marvin Gaye (“Ode to Marvin”) or Martha and the Vandellas (“I Decided”), Solange clearly demonstrates an ability to be her own person. Performing with Ryan Leslie, Solange Knowles plays Fridays at Sunset on June 26 at 6 p.m. in Kanawha Plaza. $20-$30. www.fridaysatsunset.com.