Small scale and intimate, the Saturday Social is still finding its groove. 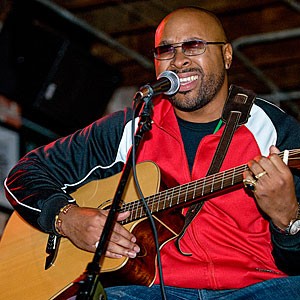 Before launching into a favored composition by the legendary songwriting team of Burt Bacharach and Hal David, singer Kenny Wesley expresses gratitude for the small audience that has filled a part of the Hat Factory's Current restaurant for the monthly installment of the Saturday Soul Social.

The jazz-influenced singer, co-headlining the show with fellow Washington-based singer Green Tea, scats his way through a short set, which includes classics such as “Walk on By” and “Creepin.'” The tenor also fits in an original composition, “I'm Still Here,” as well as a surprisingly effective soul-jazz take on “Amazing Grace” before rejoining a rapt audience of roughly three dozen people.

Current holds a few more than 80 patrons for the free, once-a-month Saturday Soul Social, so the relatively light attendance feels almost intentional. Wesley doesn't seem to mind as he performs on a small stage. His energetic performance, aided primarily by guitar and drums, fully engages the crowd, which provides approving feedback during his brief set. After the show, the singer acknowledges how important ongoing events like the Saturday Soul Social are to his career.

“We are invisible to the mainstream,” he says. “So these types of events really give us a voice.”

Providing a voice for artists whose music is rarely heard on commercial radio was the primary reason why indie soul artist and Richmond native Jarrard Anthony started the Saturday Soul Social five months ago. The former manager of Current approached him to host regular acoustic shows, which would feature not only professional headliners but also an open mic segment.

“There's really no regular opportunity to experience the indie soul music scene,” Anthony notes, “I think this is a great event to do that. It really does fill a void here. There was really nothing here for the singer-songwriter … especially for the soul genre.”

Anthony, who has released four studio albums over the years, is one of the more prominent acts who inhabit the so-called indie soul music scene. Once the music industry started experiencing slower sales a half-decade ago, many major labels began trimming their artist rosters. Partially because of that, as well as the access to distribution and international visibility that the Internet now provides to independents, a whole new scene of musical acts such as Eric Roberson, Choklate and the Foreign Exchange has sprouted nationally from the residue traces of the 1990s neo-soul movement.

A few of these artists enjoy a significant level of celebrity, having managed to secure some commercial radio airplay or music videos in rotation on broadcast outlets like VH1 Soul. But for the large majority, intimate events — playing to small, musically sophisticated audiences such as the Saturday Soul Social — represent their usual artistic outlet.

It's a reality that artists like Anthony and Wesley begrudgingly embrace. “We are forced by the design of it, to become a part of the community, which is beautiful because art used to be like that,” Wesley explains.

The next Saturday Soul Social, scheduled for Dec. 4, will feature Jarrard himself as the headliner; buzz-worthy indie soul acts Alison Carney, Jon Bibbs and W. Ellington Felton are on tap for the first quarter of 2011. The 31-year-old Jarrard, who has enjoyed a sizable national presence in the past, will release his fifth studio album next year, in partnership with a major label imprint of Universal Records. Although he could have left his Richmond home years ago for a larger market, such as Atlanta, the singer and guitarist is committed to both growing and hyping the local indie-soul scene.

“Richmond is one of those places that you rep, no matter what,” he says. “I think Richmond needs to stop looking outside of itself and start working on elevating and nurturing the artists inside of it.”  S