Snow Recap: The Calm Before the Storm Inside the CBS 6 Weather Center 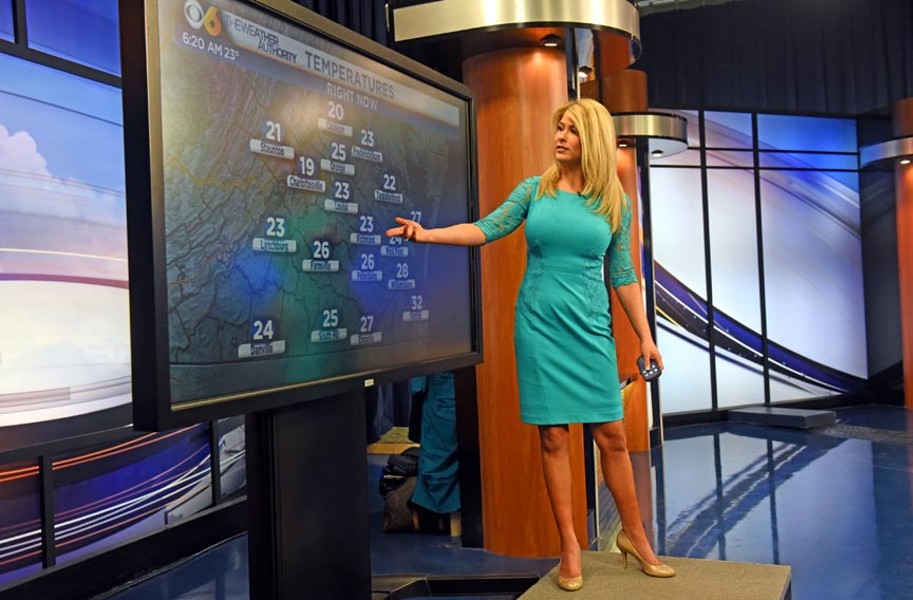 Friday, Jan. 22 — A little after 2:15 a.m., CBS 6 meteorologist Nikki-Dee Ray is in her giant purple hair rollers — but already in front of the microphone in the station’s radio studio.

The Alabama native arrived an hour earlier than usual for the big snow day with her weather dog, Louis — the French pronunciation — in tow. He’s a fluffy, white, 10-pound mass who looks like he could get lost in a snowdrift. Because of today’s storm, “CBS 6 This Morning” is starting earlier than usual, at 4:00 a.m.

It’s below freezing outside, and quiet. Most Richmonders have finished their grocery store raids and are laying in wait for record-setting weather to come. It’s Ray’s first big snowstorm since moving here last March.

She wears a green dress, with most of her makeup in place on arrival. The rollers will come out before she steps in front of the green screen for the live broadcast. But first, she must record weather spots for morning radio shows across the area.

In her Southern drawl, she makes quips that make her seem accessible, with advice on staying safe and dry. Louis is back in the studio with executive producer Lauren Mackey, fellow meteorologist Mike Stone and morning traffic reporter Kristen Luehrs.

When Style arrives to visit around 5:30, Ray opens a door to the station, smiling brightly, the powerful lights piercing the dark. The sun will be up in about two hours.

She runs to the women’s room to powder her nose before checking email, blogging and scouring Facebook. One viewer asks how much time is left to make a last-minute grocery run. Ray cautions people to be off the roads by 10.

Louis is perched on a white, cable knit blanket in the TV studio next to Ray. He is generally quiet during broadcasts, but if he does give a yip, she’ll tell viewers that Louis is chiming in off-screen.

Ray bounces between Facebook duty and seemingly countless stand-ups in front of the green screen. “There is no reason to panic, just be smart” she assures viewers.

She calls for a “layered cake wintry mix” of sleet and snow.

It’s essential to be everywhere at once, which is why she spends her morning forecasting on television, radio and social media. She darts back and forth through the station in tan heels, deftly avoiding wires and equipment.

“I’m very hyperactive,” she says. “My parents were always like, ‘Calm down!’”

She swears off coffee and prefers green tea, drunk from her Auburn University, Alabama, thermos. That’s where she studied broadcasting before receiving a bachelor’s degree in atmospheric science from Mississippi State.

By 7 a.m., more viewers are awake, and the radio spots are more frequent. She’s chatting up the hosts of country music station K95, and then updating Classic Rock 96.5-FM’s “Brady in the Mornings” with an update on brutal conditions around Washington.

If Ray is honing a brand, it includes a bright smile, meticulous appearance that seems effortless and a sunny personality that appeals across media platforms. But it isn’t all about the style. There are hours spent on the math and science of forecasting.

“I am an atmospheric scientist. I’m not just this blond-headed girl telling the weather,” Ray says. “You just prove them wrong and get your forecast right.”

Before coming to CBS 6, the 28-year-old served in Lubbock, Texas, as the youngest female chief meteorologist in the country.

Ray constantly checks weather models to be ahead of changes. She writes out equations that take into account dew point temperature, wind speed and pressure changes.

“If that low pressure system had been a little more to the south,” she says, “we would have seen what they had in D.C. and Baltimore.”

At 8 o’clock, with the storm nearing, Ray adopts a more serious tone. She knows from storm-chasing how the elements can change in an instant. “You want people to know you are not playing around,” she says.

Three hours before the snow hits, her 12-hour shift kicks into high gear. On the air, she reminds viewers that the station will continue to be there “as your snow authority.” S