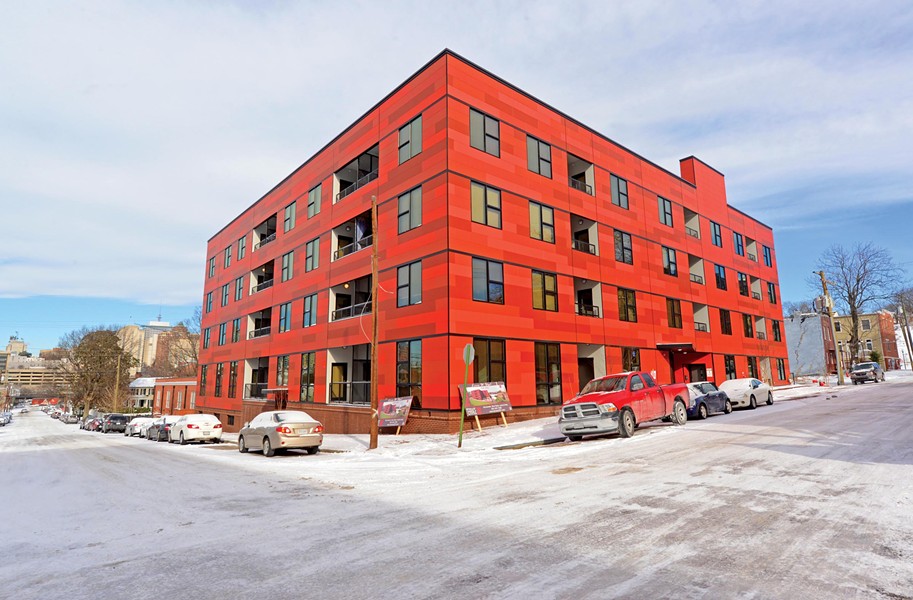 Scott Elmquist The new apartment complex at North 20th and East Grace streets re-establishes a strong urban street wall and acts as a foil to such Shockoe Valley landmarks as the frame Adam Craig House down the hill.

Stadium debate aside (if that's possible), when conversations turn to Shockoe Bottom they inevitably veer to the jaw-droppingly fast pace of new apartment development there. As one developer who's been hyper-busy in the neighborhood says, "It's like printing money."

But in our jingoistic exuberance to embrace the repopulation of long residentially moribund downtown, we've mostly averted our glance when it comes to expecting anything of architectural interest.

One reason the building looks so refreshing is because its exterior is relatively clean by having the balconies (one per unit) recede into the perimeters of the structure. There's nothing fussy or decorative hanging off the sides of the building but these deep recesses create welcome, shadowy visual breaks to the warehouselike building.

But what makes Terrace 202 really snap, crackle and pop are the boldly colorful panels — in shades of clay, deep red and earthen orange that adorn the building's exterior (the fiber-cement product, Nichiha, is manufactured in the United States by a Japanese company). These panels are applied horizontally and suggest a standard brick pattern writ large. Quite clever: Rather than add another actual red brick building to Richmond's already considerable inventory of such structures, this is a witty departure from the norm.

The oversized, patterning approach is what renowned Philadelphia architect and author Robert Venturi has termed the "decorated shed." That's a building where the architectural systems of space and structure directly serve the program (in this instance, apartments) while ornament (in this case, colorful panels) is applied independently of them. In other words, this unremarkable, simple structure could well be a medical complex or a hotel — it just happens to contain apartments. It's the "brick" pattern that lends interest.

Also playing into the architectural freshness of Terrace 202 is that the Bottom already has a considerable inventory of large and century-old brick warehouses. A standard-sized brick becomes too small of a building element for the huge scale of a collective mass of buildings. Ramping things up to a larger building element also was the design approach taken by Hardy Holzman Pfeiffer Architects when it designed the Lewis Mellon wing of the Virginia Museum of Fine Arts in the early 1980s. The architect eschewed the Flemish bond brick patterning of VMFA's original Boulevard building for huge blocks of gray stone along Grove Avenue. So as the building embraced a new sense of monumentality, it simultaneously gave a shout-out to the row of eclectic granite houses across the street on Grove.

One design element of Terrace 202, therefore, wasn't necessary. To add actual context in the historic area, the architect added a few courses of actual red brick to acknowledge and mirror the brick corbel patterns of a nearby tobacco-warehouse-turned apartments.

And what about the interior? Terrace 202 has one-, two- and three-bedroom units. Among the amenities are 40 interior parking spaces and a 3,000-square-foot, outdoor communal terrace overlooking the glorious back, double portico of the antebellum Pace-King House next door — and beyond that, the downtown skyline.

But this new kid on the block is the real attention grabber. While it's a colorful and contemporary foil to the antique buildings in the neighborhood, in massing and in its relationship to the sidewalk and streets, Terrace 202 plays by the rules. And importantly, the building addresses one of downtown's most pressing design issues — infilling downtown's relentless expanses of negative spaces that resulted from earlier generations' zealous demolition of old structures and their replacement with surface parking lots. S