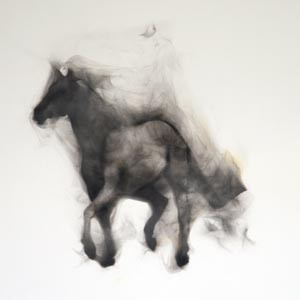 The depth of innovation can be attributed to the vitality of a creating artist. In two exhibitions at Reynolds Gallery, viewers are rewarded with challenging work from an established artist as well as emerging unknown talent. With “Ride: Works by Rob Tarbell” and a group show of Virginia Commonwealth University students, “Almost Famous,” Reynolds has created an environment in which strong voices coincide and connect.

In “Ride,” Tarbell uses the idiosyncratic process of smoke as his medium. “In my practice,” he says, “making art is as much about directing intent as it is about scientific tinkering.”

Through the process of burning plastic Tarbell uses a form of smoke to create images on canvas suspended overhead. The smoke operates on chance. The absence of brushstrokes hides the intent of the artist. His choice of horses as a narrative subject is a connection to — and a comment on — the identity of the smoke itself. Tarbell explains that smoke must be permitted to fulfill its natural path and at the same time be controlled for a greater means, much like the spirits of the horses he depicts. Though these animals can be trained and disciplined, their natural instincts cannot be overcome.

“Almost Famous” is a hand-selected body of work from the university's top students in the master's degree in fine arts program. Ten artists are selected for their standout work as the exhibit returns for its fifth year. It's a collection of individuals already strong in voice and execution.

Work such as “PocketSea” by Ana Esteve-Llorens, a grid sculpture of dyed polyester and poplar wood, invokes a contained feeling of energy. Its layered construction creates a hue of depth and weight found only in the ocean. As well, the kinetic sculptures of Younseal Eum imprison the mechanical actions of a butterfly and a small airplane within constructed cages. Their elegance and delicate nature can be viewed only through bars. In the stark light of Hon Chen's print on cotton sateen, “Water-Sky,” all time element is removed from the image. The ocean is paused for a second and held forever on the wall.

Other works, such as Hannah Walsh's two-minute video, “An Awesome,” shows an unflinching sun being eclipsed only by the appearance of a silhouetted cheerleader. Her arms are outstretched and she stands straight-legged atop a balanced hand. The pose is held indefinitely, only slightly wavering while the supporting hand struggles.

These elements of containment, absence and momentary respite leave the viewer in limbo, unsure of what's next. Uncertainty becomes a natural byproduct of innovation. To roll with change and constantly envision the next level requires people willing to act on their intuitions. And strong intuitions come from solid, confident voices.