The all-teen cast of “13” is charming but there’s little to reflect real teens’ lives today. 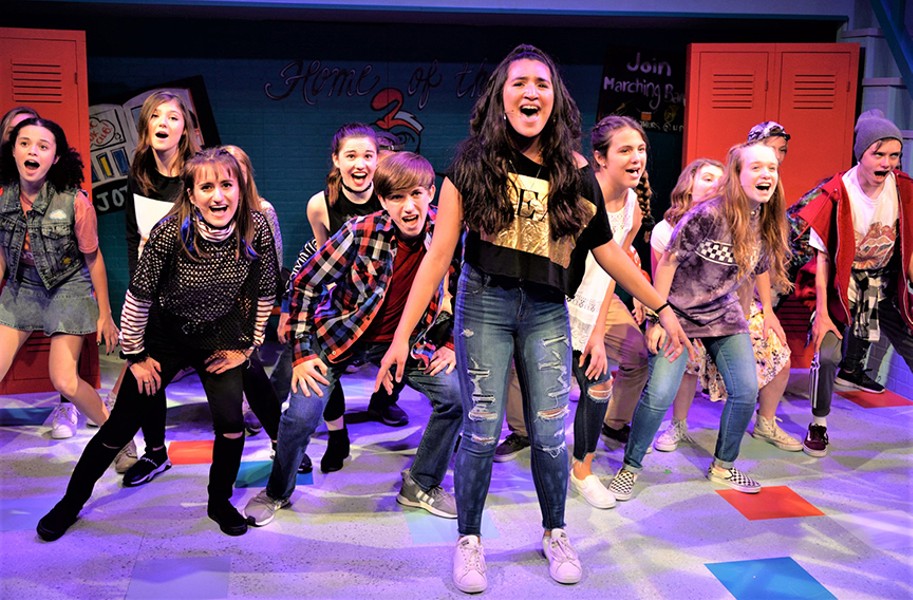 Call me a cynic, but it’s hard not to watch the musical “13” – currently being staged by Cadence Theatre Company in partnership with Virginia Repertory Theater – and come away with the idea that its creators were simply trying to cash in on the success of Disney’s wildly popular “High School Musical” franchise.

Similarly following a crew of young people as they try to navigate friendships, romance and the importance of being cool, “13” is the only Broadway musical to feature a cast and band entirely made up of teenagers.

With music and lyrics by Jason Robert Brown and a book by Dan Elish and Robert Horn, the story concerns 12-year-old Evan Goldman (Evan Dymon), a Jewish boy from New York who’s suddenly shunted off to the wilds of Indiana by his parents’ divorce. Evan desperately wants to fit in with the cool kids – or at least have the goyim attend his bar mitzvah – but first makes the fatal flaw of befriending his uncool, bookish neighbor Patrice (Violet Craghead-Way) and the sarcastic but plucky Archie (Josh Chapman).

In his attempt to fit in, Evan suddenly finds himself the matchmaker of Dan Quayle Junior High in a “Charlie Bartlett” kind of way. Both Brett (Cohen Steele), the school’s bullying football star, and Archie wish to date Kendra (Caroline Johnson), the prettiest girl in the school. Meanwhile, Patrice is harboring a pretty serious crush on Evan, and Kendra’s friend Lucy (Anjali Sharma) wants Brett for herself. Caught in the midst of these desires, Evan tries to make everyone happy.

As staged by director Anna Senechal Johnson, the all-teen cast members are charming and energetic, even if they aren’t always the powerhouse singers and dancers you’d hope for. To accommodate the demands of teen life outside of the stage, the production has been double cast; I saw the Appleton cast. Standouts include Sharma as Kendra’s backstabbing friend, Chapman’s spirited Archie – who seems to be channeling Ellen DeGeneres – and the comically expressive Ethan Dunne Stewart as Brett’s henchman Eddie.

The amiable cast helps, but there’s little in this show that reflects anyone’s actual teenage experience. Instead of delving into the unique horror of our formative years, it lists heavily into caricature.

Though selfies, Snapchat videos and their ilk abound, the execution of the show makes it feel like a relic from the ’80s or ’90s. Nerds have since gained at least a patina of coolness, if for no other reason than they can fix your iPhone. Plus, even in the home state of Vice President Mike Pence, are there no students at this junior high questioning their sexual orientation?

With a message of embracing unpopularity and, ironically, of finding your own voice, this show may play well with the age-range depicted onstage, but anyone older will long for “Mean Girls” or “Clueless” – works that covered the same turf in a more enjoyable and novel fashion.