Review: Teens in the new horror film “It Follows” catch it before it catches them. 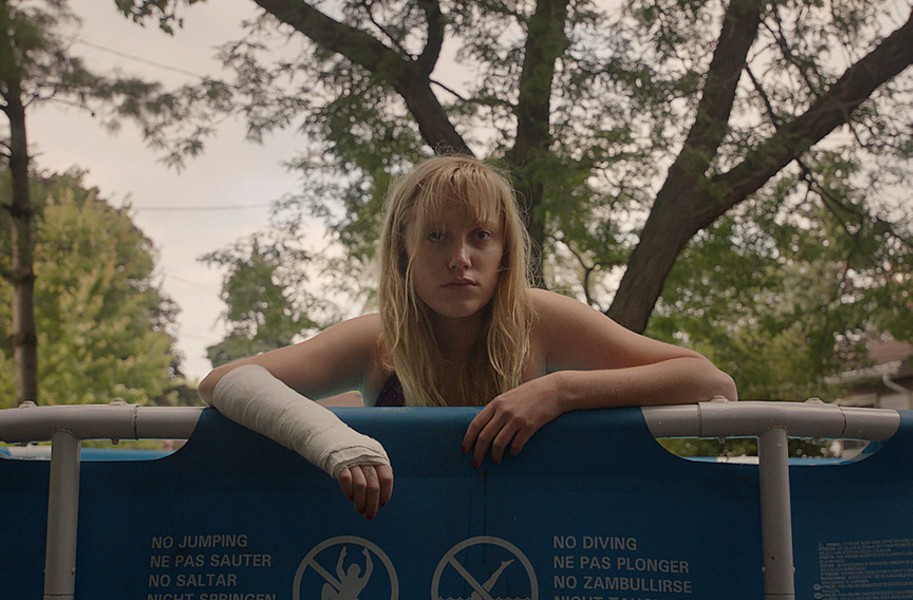 Actress Maika Monroe stars as Jay Height, a teen whose one-night stand comes back to haunt her, in one of the most visually distinctive horror films of the year from director David Robert Mitchell.

"It Follows” may be the only horror film whose monster is an STD — a sexually transmitted demon.

Film scholars may cite Christian Nyby’s “The Thing from Another World” (1951) as a precursor, but that film’s thing was more of a monstrous outgrowth of sexual tension. In “It Follows,” you get the demon directly from having sex, and you must give it to others the same way if you want any relief.

We first learn of this curious affliction when the film’s protagonist, Jay (Maika Monroe), goes on a date with her nascent boyfriend, Hugh (Jake Weary). They have sex for the first time that night, after which Hugh abducts her to a creepy, abandoned industrial complex to confess he’s transmitted something hideous to her during intercourse. It will follow her for the rest of her life, he explains, until it kills her or she gives it to someone else, or both. He’s panicky and not completely sure.

The condition in question appears first as a festering naked woman. Lumbering into view, the sexually transmitted demon understandably sends the couple scurrying in revulsion. Hugh drops Jay at home, warning her once more before he disappears into the night: Just give it to someone else through sex and maybe it will leave her alone. Jay doesn’t know what to think, or what to tell her friends. But then the STD appears again.

What’s going on here? Written and directed by David Robert Mitchell (“The Myth of the American Sleepover”), “It Follows” at first blush seems to be part teen horror film and part public service announcement about the dangers of premarital sex. The identification of the monster as a sexually transmitted disease is so thorough that you can’t help wondering if there’s more to it than just an accidental or even intended analogy. That’s difficult to say, given Mitchell’s decision to mix genre tropes with ambitious stylistic choices.

The demon is dangerous, shape-shifting and relentless, for example, but also — like so many other movie monsters — really slow. It can only walk, not run. It also targets only young adults, and has an insatiable if inexplicable desire to feast on them. In short, this largely is another story of teen protagonists on the run from a shambling ghoul whose reason for being seems to be to chase teen protagonists.

If that’s all “It Follows” was, you’d be tempted to chalk it up as spoof, but Mitchell wisely avoids getting mired in cliché. There’s enough substantive and visual distinction to keep most filmgoers wondering what’s around the next corner, and wondering what the story will add up to, even if it’s only a jump scare.

Particularly noteworthy are the film’s stylistic choices, including its soft, warm cinematography, bold jump cuts and hypnotic music by a Berkeley, California, composer known as Disasterpeace, who betters his game considerably from the rest of his ’80s video-game-inspired catalog. All give the proceedings a dreamlike quality heightened by the production design, which adds a layer of ambiguity in terms of period.

These kids are being haunted by not only a demon but also a mix of ’70s, ’80s and ’90s suburbia. One scene shows Jay and her friends watching an old horror flick on a black-and-white TV while another reads Dostoevsky on a clam-shaped e-reader. “It Follows” definitely doesn’t look like most teen horror movies.

The film may be artistically inclined but it’s also audience friendly, with likeable, relatable characters and an emphasis on plot. Mitchell also can’t resist the occasional comic relief, especially with Jay’s childhood friend, Paul (Keir Gilchrist). His crush on Jay is so heavy he’s willing to risk the STD’s clutches just to be with her, much to occasional audience snickering.

The result isn’t groundbreaking as much as conceptually interesting, which may be enough given most bloated horror film corpses, which usually scare intellectually curious audiences away. Those audiences may find themselves torn by this one: impressed and mesmerized by the style but left wondering by the substance. The urge to decipher it seems built-in, even if there’s nothing to decipher besides the brilliance of combining two eternal teen terrors into one. (R) 107 min. S