Avocado toast may be a trend of yesteryear, but we can’t get enough of it.

Avocado toast is a sparkly unicorn among an array of food trends captivating American eaters right now. Yet, it seems to be just beginning to break into the awareness of the Richmond dining scene.

A long beloved snack popular in Australian kitchens, avocado toast made the leap to restaurant delicacy when Bill Granger put it on the menu at his restaurant there, Bills, in 1993. Some claim it was born in Los Angeles, perhaps due to the ample supply of avocados, or the fact that is was glowingly mentioned in actress Gwyneth Paltrow's equally revered and hate-read 2013 cookbook, "It's All Good." But most food journalists credit Chloe Osbourne of Cafe Gitane, a French bistro near Mott and Prince streets in New York's SoHo neighborhood, as the first establishment to put it on the American radar. The original recipe has become the gold standard: toasted seven-grain bread with avocado, lemon juice, chili flakes and olive oil.

Avocado toast has earned and maintained a fairly status-oriented reputation for one or more of the following: its presence on brunch menus, its pairing with pressed, often green, juices and how widely photographed it is. Yet, it's not easy to find on Richmond menus. Is it possible that this viral bite just simply doesn't interest RVA? Or are Richmond chefs not as intrigued with something so decidedly Southwestern?  Last summer, "Bon Appetit," always up on fads, ran a piece entitled "Why Are We Still Talking About Avocado Toast?" almost as to claim that the trend was on its way out and had reached its peak almost four years before. So did it completely miss Richmond, or has it not arrived yet?

Currently, Richmond's offerings are at about a dozen spots around town, with prices ranging from $6-12. Each take on the recipe features various accouterments and combinations, some delicious, adding unexpected delight and dimension to the dish, and others kind of ruining the simplicity of it.

My journey began at the Daily Kitchen and Bar. The toast is on all three meal menus under starters for $7. The sourdough is soft — perhaps not toasted at all — and there is a disappointing lack of flavor. The dish relies exclusively on the microgreens and a sparse dash of everything bagel seasoning to give it flavor. Next.

I looked to Ginger Juice at the Village Shopping Center, hoping that a place that charges $9 for celery juice might have this figured out. And I was right. Of the three iterations (each $5.50), both the classic and the basil-pesto toast were excellent. The classic is very simply the mashed, buttery fruit on a lightly toasted multigrain slice with a handful of long-stemmed microgreens resting on top. The hidden success of this one, though, is the coconut oil incorporated into the avocado spread, making for a sweet finish against the bitterness of the greens. It is scrumptious and pairs well with the Gleaming smoothie ($5.99), which includes almond milk, banana, strawberry and pineapple. The basil pesto is more savory and also perfectly executed. The toast is the same, sturdy multigrain underneath mashed avocado with cherry tomatoes sliced in half, a generous amount of pesto drizzled on top and lots of sesame seeds for a salty crunch. 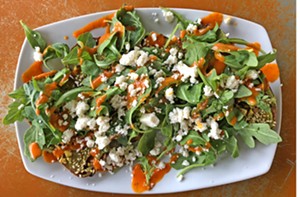 Ellwood Thompson's Natural Market features an avocado toast that is more like a whole salad on a slice of toast ($8.99). Advertised as smash avocado, it is more accurately a very thin layer of smoothly whipped spread hidden under gobs of feta cheese, a few bits of chopped pistachio, enough arugula for a side salad and a dressing of red pepper vinaigrette. 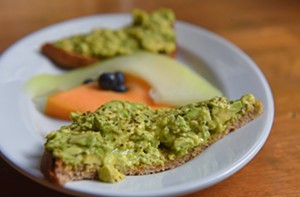 The most classic and cost-effective award goes to Urban Farmhouse. Two pieces of whole wheat toast, mashed avocado with the olive oil and lemon, plus a healthy shake of salt and pepper on top, for $5.99. It is basic in the best way, and served all day at all locations.

It is Brookfield, the lobby bar at the Graduate Richmond, though, that serves up a version ($8) that checks all the boxes: a chunky mash, a substantial toast with a buttery black char on the bottom, lots of lemon, salt, olive oil and red pepper flakes. And to raise both the protein content and the Insta-worthiness: A fried egg is served sunny side up with runny yolk. This one is my favorite, and it feels ironic — or maybe fitting, given the city's ambivalence — that it's tucked away on a hotel menu.

Turns out, not all avocado toast is created equal. And right now, the green stuff served on toast isn’t avocado at all. According to co-owner Liz Kincaid, the “fancy toast” listed as an appetizer features a spread made from micro-sunflower seeds. It’s topped with bacon, cara cara orange and Ame’s Hot Honey and comes in at $10 per serving. And for those of you who are thinking “Wait a minute, I swear I’ve had avocado toast at Little Saint before,” don’t worry, you’re not crazy. Photos posted on Yelp reveal that the restaurant has offered it on its menu in the past, featuring “bacon-fig-avocado goodness.”

After two weeks of eating it at almost every cafe where I show up, it's easy to see why people continue to be enchanted with avocado toast. It feels luxurious, tastes like a treat, fills you up, and is packed with health benefits: fiber, anti-aging properties and the same amount of potassium as a banana. It's easy to crave and easier to give into, and it won't leave you with the bloated regret of consuming too many french fries in a fit of hunger.

Maybe the fever has died down, or bypassed us on the way to Palm Beach. Maybe here in Richmond, it's just beginning. S

We tracked down a few other options around town. Whether you're looking for straight up or boiled-egg-and-tomato topped, we've got you covered.