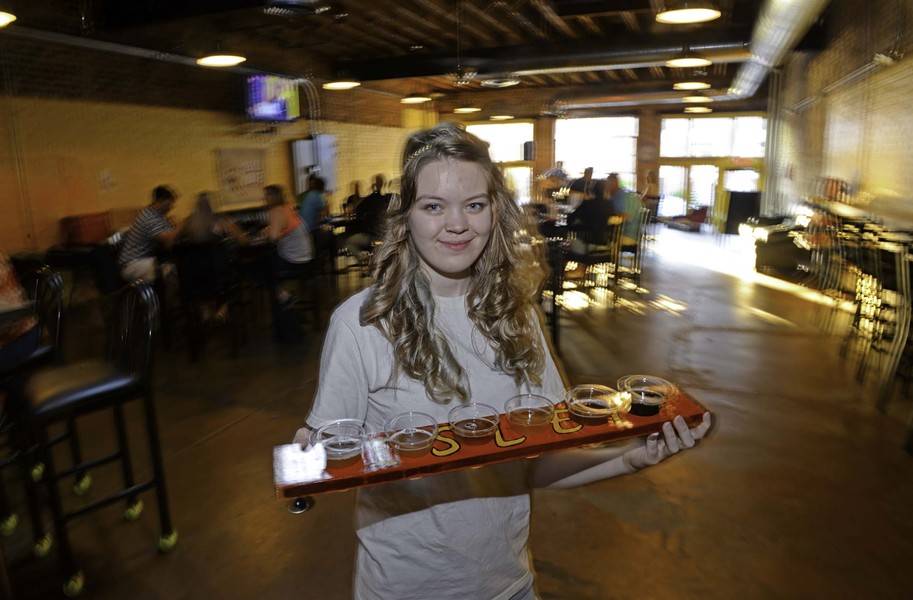 It's the final minutes of the World Cup, and going into extra time, Germany and Argentina still are tied.

Isley Brewing Co. in Scott's Addition is busy, and owner Mike Isley is surveying the scene from a seat at the bar. From the moment you meet him, you know he's going to tell it like it is. Take his Choosy Mother peanut butter oatmeal porter, for instance:

"That's one of my least favorite beers, and one of our best-sellers," he says. "That was just going to be a one-off."

Isley, who also owns Winter Plumbing and Heating, was inspired to open a brewery while attending an event at Hardywood. While patrons grabbed beer, he began to count cups, and did some quick math on a napkin. He'd been looking to start a second business, and he'd found it, opening the brewery in October.

He estimates that Hardywood does somewhere between 10,000 to 20,000 barrels annually. In comparison, he says his brewery probably will do a small fraction of that — 750 to 1,000 barrels in its first year. He prefers it that way.

"We are so small, we can do a one-off batch of beer and it's not a huge investment," Isley says. "They can't make that commitment. Our size really gives us a foot up on what we can do."

This freedom has led to some out-of-the-box experimentation. Isley's done pineapple white ales and lime-cilantro hefeweizens. There have been kiwi-infused Belgian white ales and oatmeal-chocolate-coconut porters. For the Fourth of July, brewers created the Patriot Punch, a hefeweizen spiked with Hawaiian Punch.

"That was our version of a shandy," Isley says. "I want to make something different every time we brew."

Every week Isley holds Friday Night Infusions, mixing all sorts of flavors. Since starting, the brewery has made at least 25 different beers, featuring six at a time on tap. They're created by brew master Josh Stamps, whom Isley found by posting an ad on Craigslist.

"He thought I was going to rob him in a parking lot somewhere," Isley says.

Scott's Addition has become a brewing magnet, with Ardent Craft Ales opening five blocks away, joining Isley in the spring. Not far away, Strangeways Brewing opened off Dabney Road last year. For now at least, Isley welcomes the competition.

"There's a reason McDonald's and Hardee's have always opened side-by-side," Isley says. "They increased my business. It's become a destination."

Looking ahead, Isley is considering bottling or canning his beer. Brown Distributing has asked him about expanding beyond the Richmond area, but he isn't keen on the idea just yet.

"I want to keep it as local as possible," he says. "My desire is not to be everywhere in Virginia."

But Isley is eying plans to open a second location on his 80-acre farm in Chesterfield. He hopes to hold on-site events, open a tasting room and brew beer for distribution. Isley originally planned to open a brewery in Chesterfield, but couldn't get the zoning to work. This time, the Chesterfield Chamber of Commerce and Planning Commission asked if he would be interested.

"Chesterfield sees what kind of revenue I can generate, and I do too," he says. "It's an untapped market, as far as I see it. I think we'll be opening some people's eyes."

Either way, Isley will keep the Scott's Addition location open, and plans to throw an anniversary event Oct. 21. Though he wants to grow, his aim is to stay a boutique brewery.

"To me, that's craft brewing," he says. "If you get into mass producing, then you're Anheuser-Busch."