Musicals about trailer park mullets and a red-headed orphan girl close out the season with uplifting
tunes about the underprivileged. 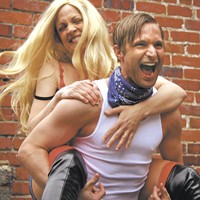 Imagine: Jerry Springer crossed with Oscar Wilde set to music. Got that? Welcome to “The Great American Trailer Park Musical,” the final show of the season at the Firehouse Theatre Project, featuring the trials and tribulations of trailer park inhabitants in a little town called Starke, Fla. This show is about mullet-wearin', stripper-lovin', gun-totin', marker-sniffin' men — and the women who love them.

The story centers on agoraphobic Jeannie (Jacqueline O'Conner) and her husband, Norbert (Paul Valley), high-school sweethearts struggling to come to terms with her condition and the kidnapping of their son 20 years before. Things get complicated when an on-the-run stripper named Pippi (Kimberly Jones Clark) moves in next door and quickly seduces Norbert, not knowing that her maniac ex-boyfriend, Duke (Chris Hester) is in hot pursuit and planning a date with revenge.

This show is all redneck humor, with songs such as “Road Kill” — dynamically performed by Hester while cute stuffed animals are tossed at the wheels of the motorcycle he suggestively straddles. But “Trailer Park” has its tender side as well, as witnessed through O'Conner and Valley's moving duet, “You Are the Owner of My Heart.”

“The Great American Trailer Park Musical” is a mocking celebration of all things redneck. At its end, you'll either feel superior to these characters or identify with them, but the raunchy world of pink flamingos and strip clubs is hard to resist. — Mary Burruss

Almost by definition, actors in the chorus of a musical are not memorable. They're supposed to be pleasant background players, bulking up the big ensemble numbers without drawing too much focus. One of the many delightful aspects of Theatre IV's “Annie” is the way director Robin Arthur has populated her substantial cast — 26 humans and 1 dog — with outstanding performers; there's not a slouch in the bunch. This consistent excellence adds zing to even the smallest moments in this tried-and-true favorite.

This observation is not meant to take anything away from the leading players. As the irrepressible title character, Sarah Day sparkles and shares a charming chemistry with Gordon Bass who plays Oliver Warbucks, the no-nonsense billionaire who “borrows” Annie from a Depression-era orphanage run by the bitter drunk, Miss Hannigan (the madcap Joy Williams). Derek Phipps and Maggie Roop are goofily amusing as the inept crooks that pose as Annie's parents to try to secure the reward Warbucks has promised, and Rachel Abrams is briskly engaging as the secretary who helps scuttle them.

But it was the numerous entertaining sidelights in-between the well-known set pieces that I found surprising in this “Annie,” from the pitch-perfect verse of “NYC” delivered by Robin Harris-Jones as an aspiring actress, to the hilarious asides offered by Jason Marks as Drake the Butler, to the charismatic turn by Chris Stewart as radio host Bert Healy. These moments pass in an instant but they leave a pleasant afterglow.

Perhaps best of all is the little clique of Annie's fellow orphans — nine sassy young girls who manage to project individual personalities while also working together like a finely tuned machine. Add in Theatre IV's typically top-notch designers — particularly the dazzling scenic work by Mercedes Schaum — and the result is not only a star vehicle, but also a precision-engineered production that fires on all cylinders. — David Timberline