The VCU Flamenco Festival II blends the wild and the formal. 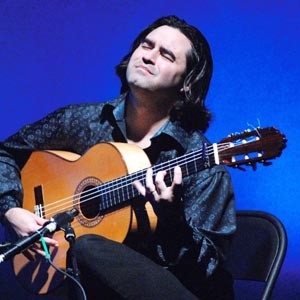 Passionate, percussive, vivid and lyrical, flamenco provides a crowd-pleasing variety of musical delights. Expect a multifaceted exploration of the quintessential Spanish style with a series of performances at Virginia Commonwealth University's Flamenco Festival II. It starts with solo guitar, adds vocals and percussion, expands to dance and closes with a Sunday afternoon showcase of local talent performing flamenco and flamenco-inspired work.

The event is a labor of love by the university's associate professor and classical guitarist John Patykula. Since the success of the initial Flamenco Festival in March 2009, assisted by recent graduate Leah Kruszewski, he's been assembling the talent for this year's event. He says the music's appeal to local audiences has always been strong. “We get some of our biggest audiences for flamenco music at our annual Guitars and Other Strings concert series,” he says. “And last festival generated enough ticket sales to do it again.”

The flamenco style emerged in the cultural mAclange of 18th-century southern Spain, with roots stretching back though a tangle of forms, such as Gypsy, Sephardic, Moorish and Greek. The distinct melodic language comes from the use of Dorian or Phrygian modes — alternative scales that are neither major nor minor in the conventional European sense. The playing is full of detail, the dance a colorful blend of formality and abandon. Although flamenco is hundreds of years old, and its golden age ended a century ago, it still commands the dedication of a select group of artists well beyond its southern Spanish homeland.

“For these players flamenco is their life,” Patykula says. “They eat, drink and sleep flamenco.” On this first weekend in November, Richmond audiences get the chance to do the same.

The VCU Flamenco Festival II comes to the Singleton Center for the Performing Arts at 922 Park Ave. on Nov. 5-7. Tickets are $10-$15 for each event. Go to www.vcumusic.org for a full lineup of events.

There will also be a flamenco guitar master class with Ricardo Marlow at the James W. Black Recital Hall, 1015 Grove Ave., on Nov. 6 at 2 p.m. Free.