Sketches in Blue and Gray

How Frank Leslie's embedded army of artists documented the war. 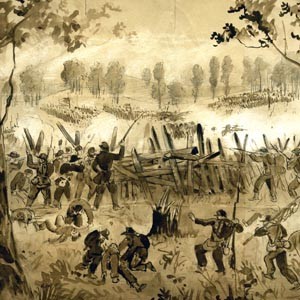 The chaos and damage of the Civil War almost shook the nation apart. With the uncertainty of events, people began to want information that would enable them to have a greater understanding of the actions taking place and the repercussions of these decisions.

To provide the kinds of details that were needed to lead the development of the information age, publisher and illustrator Frank Leslie began a weekly newspaper in 1852 to inform the masses. Upon the outbreak of the Civil War in 1861, Leslie sent what he called “special artists” to be embedded with Union troops for Frank Leslie's Illustrated Weekly. The newspaper's correspondents witnessed battles firsthand and delivered sketches of war's true nature back to New York each week for publication.

An exhibition of these rarely seen drawings is on display simultaneously at the University of Richmond and the Virginia Museum of Fine Arts. The Becker Collection, digitally archived at Boston College, is the largest private collection of Civil War drawings, second only to the Library of Congress. Of the 650 drawings that make up the collection, 90 will be on display here, divided between institutions.

These raw drawings on parchment reveal scenes of an active war at a time when photography limited its subjects to still lifes. Within each drawing you see the speed of the artist's hand to capture the moment; you find altered versions of scenes as well as detailed accounts of events before and after the great battles. William T. Crane's 9-foot-long drawing of Charleston, S.C.'s waterfront perfectly captures the geography as well as the gravity. Other artists, such as Frank H. Schell, tried to capture the grand perspectives of battle but found such tableaux too difficult to encompass. Schnell began to favor the close-up snippets of action that revealed whole truths in their focused visions.

The scenes revealed by these artists brought a new identity of the war to viewers. They also offered the general public a time to reflect on events. Through illustration they saw the action of battles, the humanity of soldiers foraging for food, the frailty of deserters on the battlefield and the great losses at the end of battles. The artist behind each sketch is inherently connected to the fight. Henri Lovie, one of the most experienced of the group, also began to sketch a series entitled Adventures of a Special Artist. Through this work he documented the hardship of his fellow artists to reveal that these images were no mere fabrications of imagination.

The coverage of the war was as novel as Leslie's approach to printing. Aside from having more artists in the field than any other, he employed more than 120 craftsmen to ensure he could print on a weekly basis. Through his goliath approach Leslie could take an original sketch and have it ready for printing within three days. Increased productivity also enabled sensationalized editing of some images. While most sketches were kept true to form, engravers and even Leslie embellished the prints to tell a truth in line with the popular perspective or for aesthetic appeal.

The alteration of final copies makes the original sketches all the more valuable for scholars and artists. In the end Leslie's army of artists risked their lives to gather firsthand accounts so readers at home might have a greater consideration for the lives of all involved. They also served.  S

Civil War Drawings from the Becker Collection will be on display at the University of Richmond's Joel and Lila Harnett Museum of Art, 28 Westhampton Way, as well as the Virginia Museum of Fine Arts, 200 N. Boulevard, until April 3. For information visit museums.richmond.edu and vmfa.state.va.us.