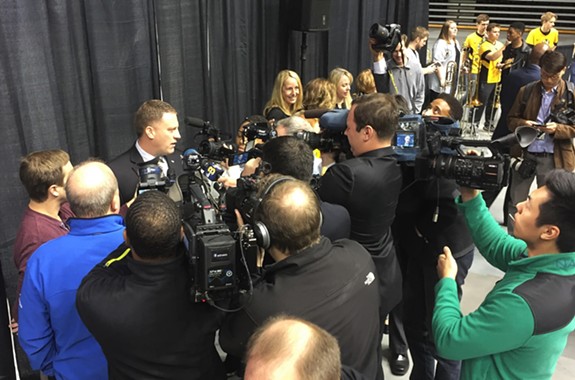 Those on hand for the 11:30 press conference came on short notice. They included local sports media regulars, members of the current basketball team and more Rams fans than typically attend college basketball games in lots of cities. The scene spoke eloquently to the positive momentum that the Broad Street-based basketball program has accumulated during the last 15 years.

Since the program started in 1968, it has seen 11 coaches. Rhoades becomes the 12th, after news broke Monday that Will Wade, head coach of men's basketball for the last two seasons, was flying the coop. Reports say Wade has inked a six-year deal to coach at Louisiana State University.

Online buzz that Rhoades might be returning to Richmond as Wade's replacement started Tuesday. That seemed to be good news. Very good news.

1. Played college basketball at Lebanon Valley College. Named by USA Today as the Division III National Player of the Year in 1995.

2. In 1996 he began his coaching career as an assistant to the legendary Hal Nunnally at Randolph-Macon College. Spent three years under Nunnally.

4. Spent five seasons at VCU as an assistant for Shaka Smart, who leads all VCU coaches in victories. Rhoades seemed extremely popular with players and fans alike.

To say most folks are over losing Wade looks like an understatement. Given Rhoades's resume and his roots in this area, the Rams have landed nicely on their feet. In many estimations, they've upgraded. The coach's first home game in November is almost guaranteed to be a sell-out. It will be VCU's 100th in a row.

In speaking of his 21-year coaching career, Rhoades closed his remarks emotionally: “We've been on a ride for a long time. It stops here at VCU.”