Six Flags: An Eyewitness Account of the World’s Smallest Confederate Rally in Richmond

Scott Elmquist A large crowd of counter-protesters showed up to send emphatic anti-racism messages to several pro-Confederate monument individuals from out of state. Many yelled at them to "go home." At press time, the pro-Confederates were conducting a gofundme campaign to do just that after their vehicle tires were slashed.

In the end, it took only a handful of Confederate heritage supporters to cause a partial shutdown and surreal freakout in the Fan last Saturday.

Just two hours before, it was a slice of that Easy to Love place. In the warming, brightening stillness of Monument Avenue’s east end on Saturday morning, a vehicle slow-rolled up Lombardy past the postcard silhouette of Gen. J.E.B. “Jeb” Stuart and his horse. A lady jogger plodded through the intersection toward the Fan’s Kuba Kuba.

It was quintessentially Richmond. 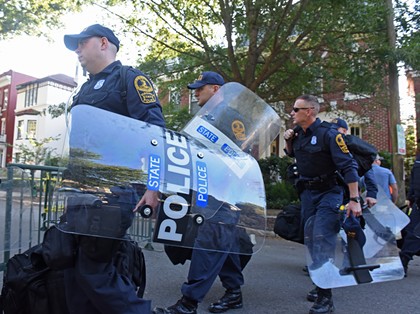 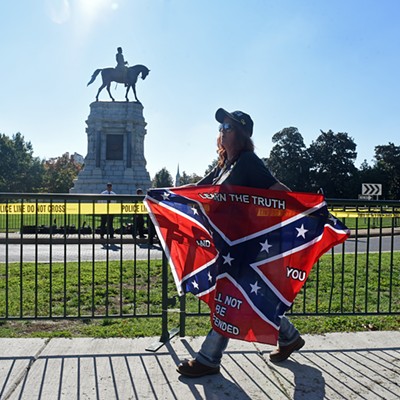 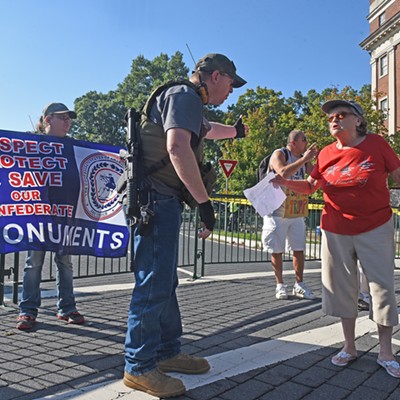 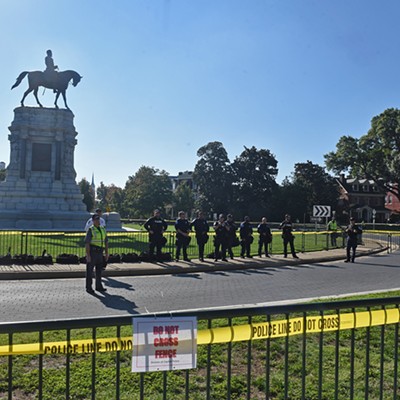 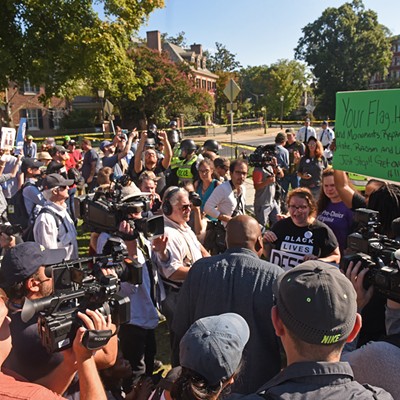 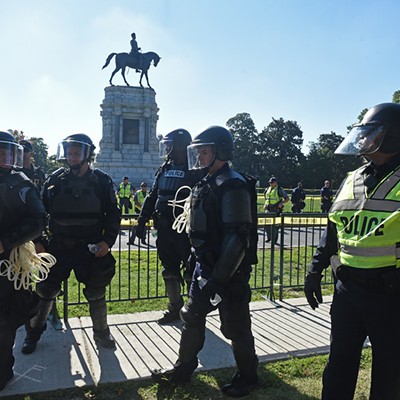 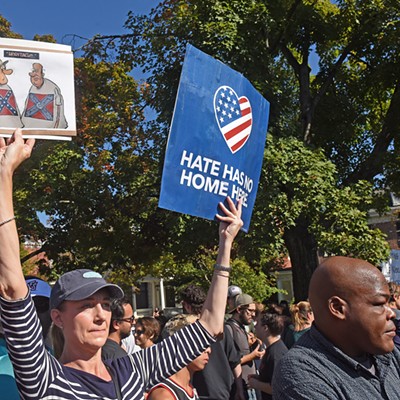 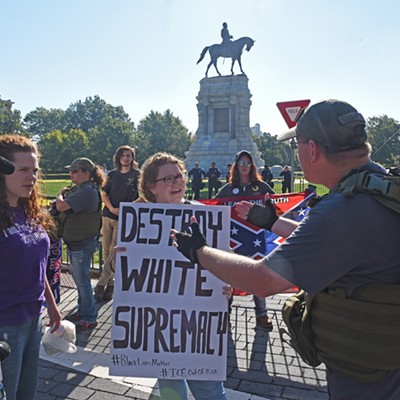 Except for the massive orange and white work trucks nearby blocking Richmond’s grandest fairway. And the sudden arrival of all-business riot cops. And the steady proliferation of journalists.

Welcome to the much-anticipated informal rally to defend Monument’s monuments, brought to Richmond by a small, loose group of Confederate statue defenders.

Getting ingress to “the action” took some hiking around an extensive matrix of metal barriers keeping everyone — pedestrians, protesters and the curious — blocks away from Monument except for three secured entries to separate controlled areas. Once on Monument, more barriers kept crowds completely outside of the traffic circle around the Gen. Robert E. Lee monument. One gate led onto the median east of the monument and another to the west side.

By approximately 10:30 a.m., the action built, by my counting, to five actual protesters and a scrum of 20 or so media types ringed around them. The scrum clustered against the metal barriers west of Lee circle. In the grass median of the avenue, other onlookers arrived and gawked casually, some sipping their first coffee.

Three people formed the core of the planned rally designed to protect Monument Avenue’s Confederate statues: Thomas and Judy Crompton of eastern Tennessee and Tara Brandau of Florida. Thomas Crompton is the president and commanding general of CSAII — the New Confederate States of America — and his wife is vice president.

Early on, the loudest voice on the scene was Pedro Rios, an advertised supporter of President Donald Trump and a longtime Fan resident, barking a stream of opinions against “them,” a reference to nearby Taylor Medley, a Richmond woman whose poster board sign read, “Black Lives Matter” on one side and “Destroy White Supremacy” on the other.

“So, how are they not instigating by getting in my face?” Medley yelled to nearby officers, calling attention to Rios and Brandau leaning closer to shout at her.

Rios: “You gave us the finger first.”

“Yeah, remember? You gave us the finger first.”

Soon, the crowd west of the Lee Monument swelled to about 200 or more, some pushing in closer to the small media crush and others dispassionately standing in the shade, talking, people watching and smoking. Not protesting.

The temperature rose alongside the volume of counterprotesters, eventually cuing cops in riot gear to form a human barrier and, as a byproduct, absorb angry chants hurled at the visiting ralliers. Strategically, the Virginia State Police and Richmond’s force proved to have learned from Charlottesville. Rally points were segmented, and squads of armored officers were positioned to separate groups more as they formed.

Saturday evening, Richmond police reported seven arrests during the day — only one from Richmond and two from out of state. Four were charged with wearing masks in public — a legal barrier against the Ku Klux Klan and stickups — two on weapons-possession charges and one for disorderly conduct.

With cameras and microphones pointed at them, the Cromptons and Brandau dispensed random litanies of historic citations and quotes attempting to argue their case for the monuments to stay. In sporadic bursts, Brandau and another ally, Jenna Bernstein, loudly affirmed their commitment to peaceful protests and defended Confederate history. Bernstein flashed a gold colored armband around her left biceps. It read “Juden” in the middle of a Star of David, similar to ones warn by the persecuted in Nazi Germany.

“We gotta get our history right!” she said, adding a claim that 12,000 Jews were known to serve the Confederate States of America.

Other attendees, undeclared to a side in the monuments debate, jumped into the swirl of noise — of tit-for-tatting, of loud agreements with random other voices, all of them overlapping and producing very little coherence.

Then a new voice rang clearly in, yards away from the rally beehive: “I’ll tell you what I’m about! I’m about Jesus Christ!”

“Amen!” came an outcry from people close by.

It was self-styled street evangelist Jason Collier, an athletically built 20- or 30-something with blue jeans, sunglasses, close-cropped hair and a black T-shirt with his message: “Jesus is Enough.”

Collier’s friend John Newton stood by with a big rectangular corrugated cardboard sign topped with a cross and asking the question, “Do you know Him?”

As his fellow worshipper kept to a heated testimony, Newton explained, “We stand to just give people the truth.” He gestured to the bronze statue of Lee and his horse Traveller and continued. “We’re so focused on things that aren’t living.”

By day’s end, social media posts came from others in the Fan as the rally dissipated, showing the unsterilized versions of what happened when Brandau, the Cromptons and others were led out of the rally zone after violent threats from counterprotesters and two slashed tires on their truck.

One shaky phone video followed the group back to the Fan street where the monument defenders had parked. Media folks swirled around them and others followed to denounce them, firing words like shotgun blasts, and to send them away under rebuke.

In the end, it took only a handful of monument defenders to leave the Fan louder than they found it. S