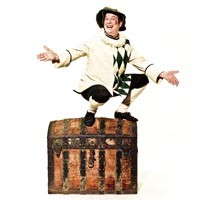 The term commedia sounds like something only theater scholars would know about. But we've been surrounded by some version of it most of our lives.

Developed in the 16th century, commedia dell'arte is the basis of all situation comedy in which stock characters make the same mistakes in a variety of situations. Think “The Three Stooges,” “I Love Lucy,” “Seinfeld” or “iCarly” — they all have roots in this 500-year-old art form. Although the performance style isn't new, Henley Street Theatre Company has brought commedia dell'arte in its original form to Richmond for the first time via its production of Carlo Goldoni's “A Servant of Two Masters.”

“This is a really fun type of comedy because it is actor-driven,” Henley Artistic Director James Ricks says. “Which is to say there are places where actors can explore and play around.”

In commedia dell'arte, expected stock characters are placed in different situations and the actors improvise based on a loose plot. In the art form's earliest days, shows were performed outdoors by masked actors while women were included in theatrical casts for the first time. Because of decreased patron support, theatrical troupes collected money from audiences by passing a hat, thus creating the first independent theatrical groups.

“A Servant of Two Masters” originally was performed in this manner, but Goldoni decided to write a more formal script and adjust the production format to omit masks and play indoors. And voila! Here was the birth of the next theatrical art form, learned comedy or commedia erudita.

The Henley Street version will be true to the hybrid style of the play as it evolved. It bears elements of both genres. There is traditional costuming, plenty of slapstick, a couple of masked actors and some ad-libbed moments in homage to commedia dell'arte. Elements of commedia erudita include the indoor performance venue, footlights and the dominance of scripted material.

“A key challenge for the actors is the specific physicality of the play,” Ricks says.

Richmond actor Richard Koch adds, “An actor would spend their whole career perfecting one character and that character's physical mannerisms.”

Adept at comedy, Koch is trying to cram a lifetime of central character in just a few short weeks of study. Ricks brought in a big gun to help — Matt Wilson, artistic director of Faction of Fools from Washington. “He is an expert in this stuff,” Koch says.

“A Servant of Two Masters” should prove to be a goofy good time. The story focuses on Truffaldino, an insatiable servant who decides to secretly take on a second master in order to have access to a second daily dinner. A mirthful mayhem of misunderstandings, mistaken identities and romantic mix-ups ensue. For people who complain that nothing “different” happens in Richmond theater, here's a challenge for them to buy tickets and prove themselves wrong. S