Under the shadow of Interstate 95, surrounded by structures that impede its visibility, is a stretch of grass in Shockoe Bottom that’s been largely ignored for much of its existence.

Though recent efforts have been made to commemorate this patch of land, a place where countless enslaved and free Richmonders of African ancestry are buried, it still feels forgotten, off the beaten path, situated in a way as to not draw attention. Nearby is Lumpkin’s Jail, also called the Devil’s Half Acre, which for 20 years was Richmond’s largest holding site for enslaved people. It too seems undervalued as a part of the city’s history.

A continuous flow of cars scream past these sites on I-95 above. A plastic bag dances in the wind like an urban tumbleweed. Someone throws a full water bottle from the Broad Street overpass to splatter on the cobblestone walkway below. Oddly, the grassy land of Richmond’s African burial ground is dotted with the kind of lampposts you see in parking lots. It’s because, until about a decade ago, this place was a parking lot.

Richmond’s practice of concealing its Black history is a theme of Hidden in Plain Site, a free, augmented-reality experience that takes viewers on a virtual tour of the city’s neglected and underserved narratives. Created by a trio of locals in reaction to the murder of George Floyd by police in Minneapolis, Hidden in Plain Site allows users to tour roughly a dozen historical sites using a web browser or virtual reality goggles.

At each stop, beginning with Lumpkin’s Jail, viewers see a 360-degree panorama of the present day before the scene fades into sepia, with historical photos and illustrations showing what has been lost to time. 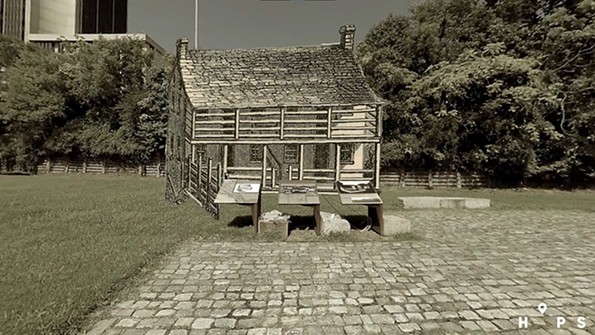 Launched in November and viewed more than 100,000 times, Hidden in Plain Site is about to enter its next phase, expanding into other cities to illuminate other underserved histories.This summer, the Richmond tour will launch on Discovery Education, a Discovery Channel affiliated online educational platform.

As the country continues to grapple with a racial awakening renewed by the murder of George Floyd, Hidden in Plain Site wants to ensure that these neglected histories are accessible to all.

Even before the spikey proteins of the coronavirus began ripping apart all aspects of daily life last year, J. Dontrese Brown and Dean Browell had a meeting on the books for June 1.

Friends from Randolph-Macon College, where Brown is the executive director for the Edge Center for Career Development and Browell is an alumnus, the two met at the Shockoe Bottom office of BrownBaylor, Brown’s creative strategy and marketing agency.

Exactly one week after Floyd was killed, Brown and Browell began discussing how they could contribute to the cause of social justice. Through his work with community leadership organization Leadership Metro Richmond, Brown had come across research about Lumpkin’s Jail and criminal justice reform. Noting that Lumpkin’s Jail was just a short walk from the office, Brown and Browell came up with the idea for Hidden in Plain Site together.

“People are just missing the importance of this,” says Brown, standing at the site of Lumpkin’s Jail the Saturday before former police officer Derek Chauvin was found guilty of Floyd’s death. “We had both coined [the name of the project] that day: They’re just hidden in plain sight. People walk by it every day.”

Brown and Browell looped in David Waltenbaugh, who had been working to build a virtual reality platform to assist adolescents with mental health issues through his company Root VR. After Browell, executive vice president of market-based research consulting firm Feedback, did some research, the trio scouted 40 potential historical locations before narrowing their scope to roughly a dozen.

Highlighted on the tour are places that no longer exist – such as the Eggleston Hotel, the Swan Tavern and the Exchange Hotel – as well as ones that do, like the Hippodrome and the Maggie L. Walker National Historic Site. Jackson Ward, a historically African American district that commemorated its 150th anniversary on April 17, contains a number of the tour’s highlights.

Many of the sites have little or no commemoration of what they once were. The tour stop for Navy Hill, once a thriving Black community, shows how the neighborhood was decimated by the mid-century construction of interstates 95 and 64 with a historical image from Seventh and Preston streets. After consulting a map, the trio realized the intersection is exactly where I-95 runs today. In the tour, the image is sited slightly north of its actual location near a Virginia Commonwealth University parking lot.

“Half of the things we were thinking about [highlighting] were parking lots,” says Browell, who wrote the script for the virtual tour.

“Those [sites] were the ones that we noticed carried the most pain, the most suffering, the most weight or the most controversy,” adds Brown, who serves as the tour’s narrator. 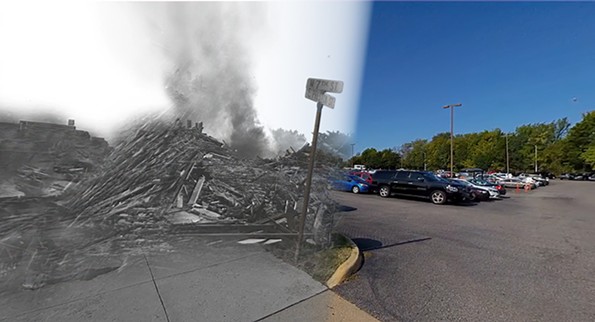 While Hidden in Plain Site doesn’t directly grapple with the city’s debate over Confederate monuments, Browell says Richmond’s commemoration of that five-year span of history over the narratives of its Black residents sends a message.

“We hear a lot of the history about Richmond being the capital of the Confederacy, but as far as Richmond and Virginia’s role in the entirety of the trade of enslaved Africans in America, Richmond is such a critical point,” Waltenbaugh explains.

Hidden in Plain Site’s next project will likely be a similar tour for Charleston, South Carolina. Next year, Hidden in Plain Site will be part of a digital exhibit at the Virginia Museum of Fine Arts, including a virtual tour that will highlight the area’s history. Conversations are underway to create similar tours for Charlottesville, James City County, as well as a tour that will highlight Seattle’s Asian and Black communities.

There are also plans in the works to make the Richmond tour a permanent exhibit at the city’s Black History Museum. In July, the Richmond tour will launch on the Discovery Education’s online platform, giving access to 45 million students and teachers. Future projects will also be made available on the platform.

Unlike other stops on the Richmond tour that begin in the present day then go sepia, the last stop, the Lee monument, takes you through the past to get to the present. Or, at least, the recent present.

When Waltenbaugh filmed the Lee monument for the project, it had already been covered in graffiti and surrounded by memorials to those who had died at the hands of law enforcement in the Black Lives Matter era, but hadn’t yet been surrounded by the state with high fencing that prevents visitors from interacting with it. The tour offers a rare opportunity to visit the monument as it once was.

Though he once advocated for the complete removal of the Lee monument, Brown says its reclamation by protesters has changed its meaning for him. He now believes the graffitied pedestal – minus the statue of Lee on top – should stay in its current form.

“What it represents now, being all tagged up, is an important gesture for us to remember,” says Brown, standing across from the monument.

“The most powerful part is all the memorials that go around there. I’ve got young kids, 12 and 14. Having them be a part of this, and sitting taking pictures on those stairs, remembering this point in history was important, and now you can’t do that.” 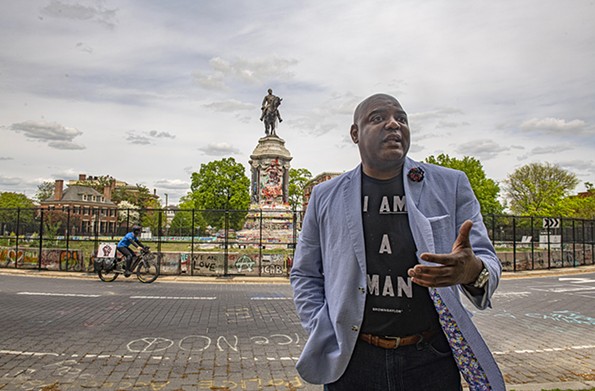 Paraphrasing the close of the tour, he says there’s plenty of work to be done.

“[Here] we end our story, but for some, it’s the beginning,” says Brown, who helped lead the effort to rename the Boulevard for Arthur Ashe.

For more information on Hidden in Plain Site, visit hiddeninplainsite.org.