Kate Warren Richmond native Mason Bates recently was named the most-performed composer of his generation and the 2018 composer of the year by Musical America.

Not long ago at the Arizona Musicfest, he was given a helicopter ride over the desert, with organizers hoping to inspire the Richmond native and "most-performed living composer of his generation" into writing about the landscape.

"I ended up writing about the landscape and the helicopter," Bates says with a little laugh. "I called it 'Desert Transport.' You can absolutely hear the spinning of the rotors and the expansiveness of the desert."

That's because on field trips like these, Bates carries a Zoom recorder that he uses to document sounds such as a particle accelerator starting up, or more recently, sheets of money being printed during a tour of the United States Mint in Washington.

"I don't exactly know where that's going, but I'm writing a piece for the Kennedy Center (where he's the inaugural composer-in-residence) for December," he says. "You never really know until you get the sounds and have the experience."

At 41, Bates already is considered a savior of classical music, widening its possibilities and pushing it into the 21st century by incorporating electronic and improvisational music within his "concert experiences." He also performs as a club DJ under the name DJ Masonic. And he'll be returning to Richmond on May 12 with a world premiere for chorus and orchestra titled "Children of Adam," in celebration of the 60th anniversary of the Richmond Symphony.

"He's really one of the leading composers of his generation and has grown up listening and being connected to a wide variety of music," says the symphony's music director, Steven Smith. "It's enormously exciting. He puts things together in unusual and interesting ways. … And he has a lot of great work ahead of him."

Bates explains that his journey started with the Richmond Symphony, where he first heard and studied orchestral concerts before graduating from St. Christopher's School in the mid-'90s, attending Julliard School, and becoming an in-demand composer and curator who also has written a film score for director Gus Van Sant ("Sea of Trees") and a popular opera about Steve Jobs that premiered last year at the Santa Fe Opera.

However, he's never written for chorus and orchestra, he says, which often is associated with requiems or ponderous, weighty music: "I liked the idea of approaching it in a way that is more bright and uplifting," he says.

The title "Children of Adam" comes from a Walt Whitman poem celebrating the connection between the spirit and the body. Lyrically, there also are selections from the Psalms, the book of Genesis, a Native American song and American poet Carl Sandburg.

"Essentially this is an exploration of different texts, whether sacred or secular, about creation and rebirth," Bates explains. "The Whitman poem comes in these fanfare choruses, or interludes. … The more imagery in there, the more you can put musically. There is something profoundly spiritual about all of it."

Bates started out looking for subject matter about creation and rebirth, but was unsure how to relate that to Virginia. That's when he called his former St. Christopher's music teacher, Hope Armstrong Erb, who played a key role.

Erb was driving back from viewing the solar eclipse in South Carolina when she got the call, she says. She stopped the car and took a 45-minute walk while telling him about the Mattaponi Indians based near Bates' own family farm in King and Queen County, in his family since 1850. Erb insisted Bates visit the tribe, where he wound up hearing their creation story of Tolepe Menenak, or Turtle Island, from an Algonquian-language song shared by Sharon Sun Eagle, who runs the Spirit Rising nonprofit. It would become the centerpiece of Bates' new work. 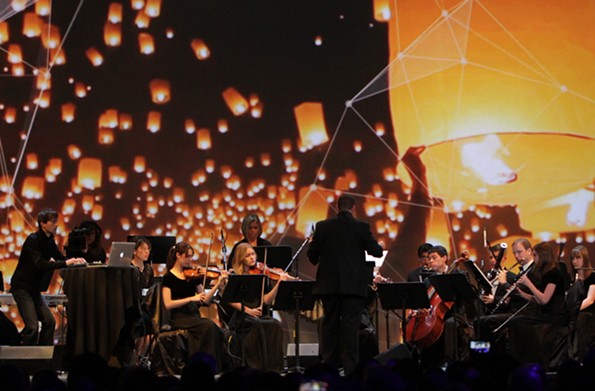 "I don't know anybody more spiritual than Native Americans," Erb says. "That's what I'm most excited about. This work will be helping resurrect a culture and lift up a wonderful people." Nearly a dozen relatives of Sun Eagle will be attending the Saturday concert in full native dress, she adds.

The Sandburg poetry was included to provide an antinature perspective to broaden the oratorio, Bates notes. "He's one of the few poets who writes beautifully about the Industrial Revolution. 'Prayers of Steel' and 'Smoke and Steel' talk about the creation of the industrial age in a reverent way, smoke curling up from a factory, driving spikes in a railroad tie — he found a beauty in all of that."

The music he composed for that section is "kind of orchestral-industrial, big beat trip-hop," he says, chuckling. "There's a fair number of metallic scraps in the percussion section, oil drums, while the chorus is chanting reverently."

Though Bates lives in San Francisco with his wife and children, he often returns East for his role as the composer-in-residence at the John F. Kennedy Center for the Performing Arts in Washington, where he curates the KC Jukebox Series, which has brought a wide range of performers including legendary electronic German duo Mouse on Mars and Thievery Corporation.

"It's a place I grew up going to, really the only place in this country that has so many art forms under one roof," Bates says, adding that the center created the position for him after his five years as composer-in-residence with the Chicago Symphony. "They recognized that while my main thing is writing music for orchestra, I've become specialized in creating concert experiences that present classical music in new ways, using elements of club culture, different kinds of production and projecting information."

If you've seen Bates' work performed live, you know the composer usually is in the middle of the action with the orchestra, leaning over a laptop or drum pad, although this will not be the case in Richmond. He always wants to make sure the audience is interacting with both sides of the composer's brain, he says, the more cerebral, analytical side and the intuitive, improvisational side. "You have to play those off each other," he says. "Artistic direction to me is more like strategy, you're looking at it from a higher perspective."

Many approaches to writing music start with a little cell or riff that becomes strung out over a piece, and Bates says he used to write that way, but now starts by thinking about what he wants to say "and whether there is a dramatic element."

His music is known for exploring big ideas, and often for its optimistic or hopeful approach to technology. "Generally, I like to have music that draws you in in some way," he says. "That way you can go on a deeper journey."

Looking back at his career, Bates sees a consistent striving to evolve. 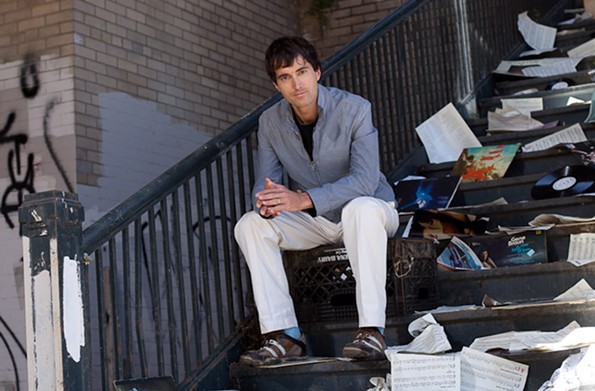 "Clearly I have a debt to the symphonic tradition, jazz, the hopeful sound of [Aaron] Copland and [Leonard] Bernstein," he says. "But as the world has been changing, and I've been hearing different sounds from electronic music, that approach is evolving."

Not all of Bates' past compositions can be characterized as optimistic. One piece titled "Alternative Energy" begins hopefully, conjuring the farm of Henry Ford with an Americana approach, then each movement gets darker, moving century by century into an approaching meltdown. Another long work, "Liquid Interface," starts with the sound of glaciers calving in Antarctica and, as each piece gets warmer, it reaches a climactic moment that conjures the devastation of Hurricane Katrina. "That's definitely a comment on climate change, so I agree with you," he says. "There is a dark side to a lot of human development."

"Beyond technology, my biggest piece 'Anthology of Fantastic Zoology' is a setting of this incredible compendium of [Jorge Luis] Borges. I would describe that as a dark fantasy that conjures up different mythological creatures," he says. "But whether it be from a subject matter or musical approach, I think you have to have a balance of dark and light. … A kind of vividness in rhythm is something that American composers have a knack for, which can feel hopeful."

Bates tells his own students that they need to be able to write music for any situation: "In order to do that you need to develop your craft so you know how to write the sound of glaciers calving. Is that a chord that floats up and explodes in the upper registers, or what is it?"

The composer still looks back fondly on his education in Richmond, particularly at St. Christopher's where he was in the choir. "Overall the school's strong faculty, like Hope Erb and (former poet laureate of Virginia) Ron Smith were crucial."

The major lesson they imparted was discipline, he says.

"The best thing you can have is a big imagination, and some are born with that," he says. "But if you don't have a sense of craft you won't be able to hone that."

Erb says that, even as a young student, Bates stood out because of his willingness to focus and write things down, working out his own compositions. "He had a lot of drive from the get-go," she recalls.

A critical moment came when he was a junior in high school and won a composing competition that allowed him to study at Virginia Commonwealth University with the memorably eccentric Dika Newlin, a composer and colorful punk-rock singer who was the last living pupil of Austrian composer and music theorist Arnold Schoenberg. "That was an incredible opportunity," Bates says. "VCU put that in my lap."

Reading a decade's worth of critical acclaim for Bates, it can feel like he is the 'anointed one,' tasked with saving classical music from obscurity by engaging younger audiences. He admits that he feels the pressure sometimes.

"Sure, it's always a lot of pressure to feel like you are a gateway to many people's experience of classical music," he says, pointing to his symphonic piece "Mothership" that was commissioned by YouTube and webcast live to millions around the world. That piece has since become one of the most performed works of the 21st century.

"I had to do what I always do, put my head down and focus on what I thought could communicate, surprise and challenge," he explains. "The only way to get to that, is to put something in your art that has real soul. If you're trying to move classical in a new direction, you never want to do the crossover approach. Think about George Gershwin. What makes his music so awesome is he found a way to integrate classical and jazz while bumping up both elements at the same time, without watering down either of them.

"I look at someone like that as a real model."