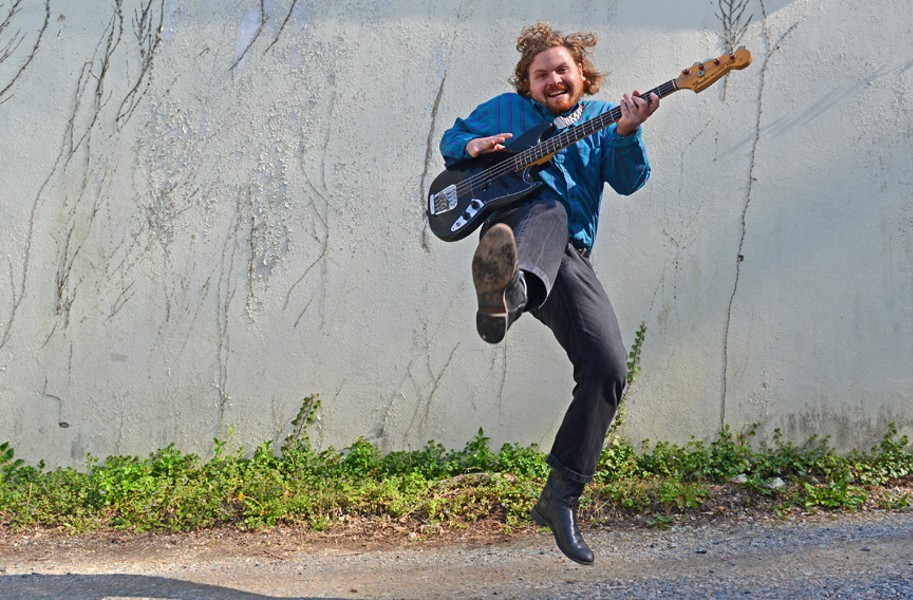 Sitting in the dining room of his South Side home, surrounded by old-school recording equipment and his adored dog Birdie at his side, Justin "Saw" Black is all smiles.

"She's getting used to the attention," he says. His pup has been a staple of local music videos and photos since the former art handler at the Virginia Museum of fine Arts decided make music full-time a few years ago. Saw, a nickname with "a back story too long to tell," is reeling off a few taco-charged stories from Austin, Texas, at South by Southwest.

His excitement isn't because of the overhyped hoopla on Rainey Street downtown, but rather he beams when talking about catching up with old Richmond pals and Austin transplants such as the Diamond Center, photographer Craig Zirpolo and his marathon of small gigs.

That's the kind of vibe Saw Black embodies: authentic, down-home and fueled by a legit love of music and good company. And he promises, he's not just "another boring guy with a guitar." That's even more clear with Black's second album, "Water Tower," which comes out on May 18 and marks significant growth for the songwriter.

If his memorable debut, "Azalea Days," was his breakup album, this one is about self-reflection and transition. Recorded between three studios with multiple band lineups, the sound is bigger and more textured, thanks in part to masterful engineers Russell Lacey at Virginia Moonwalker and Adrian Olsen at Montrose Recording.

Over 14 songs, Black tackles everything from addiction to finding love again, and shows a bona fide appreciation for the little things that anyone who grew up in Richmond and points south might appreciate. Like water towers. It's Americana in the nonroll-your-eyes sense — an album you could confidently share with your Neil Young-loving uncle and get a little respect.

"I used to love going to my grandfather's house because he had a piano and would play the "Batman" theme," he says. His grandfather was James W. Black, a renowned jazz musician who has a building named after him at Virginia Commonwealth University and the Community School of Performing Arts. "He'd ask me, 'How does that go?' He obviously knew, but he'd play along with me. And then, he just took off. That music had only ever come from the television, so it just blew my mind," he says.

Saw picked up an electric guitar when he was about 11, but didn't immediately fall in love with any style. "I was super into all kinds of music. Crosby, Stills, Nash and Young. … and I was obsessed with Jay-Z. He knew how to tell a story," he says. It's no surprise that Black can tell a hell of a good tale with that kind of taste, and it explains his appreciation for a range of genres. Look no further than the bands on his label Crystal Pistol Records, which he co-owns with musician Pete Curry: names such as Dharma Bombs, Dogwood Tales and the You Go Girls.

Speaking of labels, "Water Tower" will be available on Crystal Pistol and Charlottesville's Warhen Records. For now, Black remains committed to the do-it-yourself way of getting his music heard, emailing media and booking folks relentlessly.

"It's hard work, but I think it resonates to get a personal email from someone about their music," he says. It paid off for one big gig. This summer at Friday Cheers he'll open for Tyler Childers, recently named one of Rolling Stone's top new country artists.

"I just kept bugging [Festival Manager Stephen] Lecky, reminding him that 'Azalea Days' was the most-played album on WRIR in 2017."

"It finally worked," he says with a laugh.