Singer Wayne Coyne of the Flaming Lips on Longevity, Biblical Unicorns and Working with Miley Cyrus 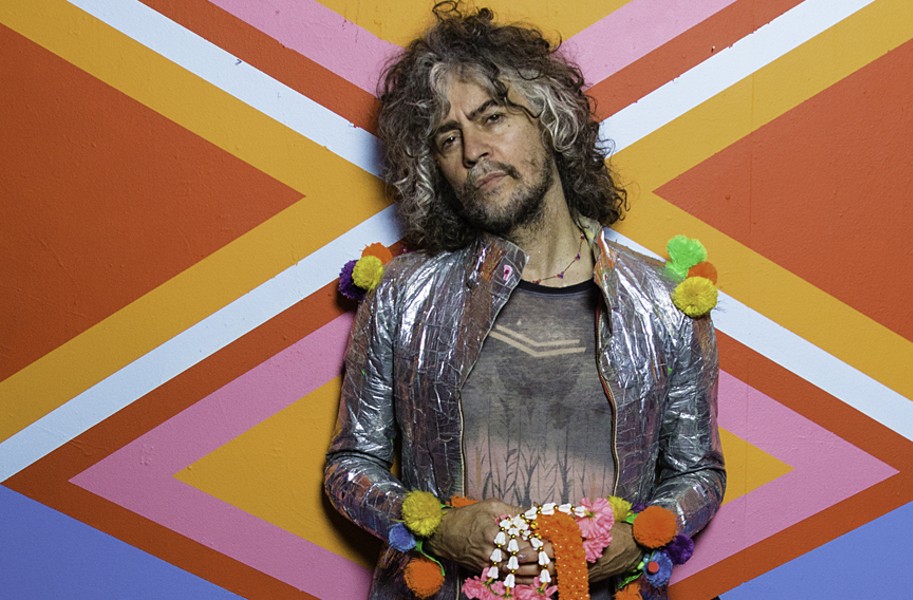 The top-selling item on Discogs for the month of December sold for the princely sum of $5,184.93. It wasn't an original A&M edition of the Sex Pistols' "God Save the Queen" single or a rare Beatles mono pressing, but a memory stick of music by the Flaming Lips encased within an actual human skull, from a limited edition of only 13 copies released, appropriately, on Halloween 2011.

The Flaming Lips are no strangers to this sort of thing. The long-running psychedelic pop act is perhaps rivaled only by Jack White in its quest to preserve the art and collectability of physical media. It's something appreciated by the band's many die-hard fans.

The group returns to the National on March 10 in support of its most recent album, "Oczy Mlody" (Polish for "eyes of the young") which follows 2013's moody and apocalyptic "The Terror." The Flaming Lips have earned a reputation as one of the most exciting live acts of the past quarter century: Think Pink Floyd for a generation of people raised on Adult Swim.

I spoke with co-founder and frontman Wayne Coyne from the car that he says doubles as an office. He was philosophical, humble, and a lot of fun.

Style Weekly: Your 24-hour Skull Song just fetched over five grand on Discogs. What do you have to say about that?

Wayne Coyne: I say, well, good! The dilemma is that anyone who has one of those things is not legally allowed to sell it, or have it, or transport it, or anything. I mean it's a wonderful thing we were allowed to do, and when we were doing it, I knew it was slightly insane, but the further we got, the more I thought "Oh my God. … This is totally insane!" But it was just an idea we had, so we pursued it.

Flaming Lips releases have also taken the form of memory sticks of music imbedded within a 3-pound, bubblegum-flavored gummy fetus and packaged with a modified version of the Strobotop animation toy. As far back as 1997's four-CD boombox experiment "Zaireeka," the band has made physical media and packaging a high priority. How do you view the change toward digital music libraries and streaming affecting this?

I think it's cool [with digital] that anyone that wants to hear your music can get it. I mean, I think that's the breakthrough, that you can have things within seconds of wanting them. The trade-off is that you have to think, "How do we do these unique things that we want to offer to people to buy?" I think our desire is to not to have it be a bigger experience, just more of a Flaming Lips experience. We have a record coming out for Record Store Day, and the vinyl has this hollow center in it that's actually filled with beer.

Whoa! That ought to go over well in Richmond. This is a very beer-friendly town.

And that's not even that absurd in relation to other things we've done, but I think it's great that we can actually do something like that and put it out there.

Do you keep copies of all the Flaming Lips releases? I imagine you'd need a dedicated room in your house to contain everything.

Well, I think I do, but then someone will come to my house, and I'll say "Oh, you gotta have this thing," and I'll look and realize that I gave them all away. Somewhere there's probably some collected edition of everything we've done, but I don't have it. I mean, I'm always surprised by how much stuff we have in the world, anyway. People will bring things up [at concerts], and I'll go to sign it and I'll be like "What the fuck is this? Hey, who put that out? Oh, wait, sorry, we put that out!"

It's become a cliche to compare bands to married couples, but you and Michael [Ivins] have been playing together for 35 years, and you and Steven [Drozd] almost as long. To what do you attribute this longevity?

I think it's just very much the luck of our personalities. When we started the group, way back in the early 80s, I think Michael and me were very much glad that we found each other. Neither of us were really musicians, we were just inspired punk-rock weirdos who liked doing art and music and whatever. And I think we discovered that we had a lot of things that we liked about each other, and we liked this idea of stability and family and stuff like that.

Speaking of insane, did backing up Miley Cyrus on her "Dead Petz" project inform this record? What did you take away from that experience as a backing band?

We're always running into people that we love, whose music we love and who we love being around, and one of my ways that I know I can be around people and be involved in their lives is by working with them. So, with someone like Miley, we started to become friends; we have the same core values or whatever. She comes from a big, crazy family, and I come from a big, crazy family, and we just had an intuition about each other, you know? And then we started to make music together, and before we knew it, we had about 15 or 16 songs that we were working on. And then the tour that we did together. … Those things are so stressful. There was so much going on, and there are a lot of big productions and stage things to learn. And she's such a giant celebrity. We're used to moving one way and she's used to moving another. But none of it was weird. It was all absurd and fun.

I think the sound of what we were doing was something we wanted to do anyway, so the more that we worked with Miley, and were around Mike Will and people like that, the more it just encouraged us to keep evolving, you know? Fucking with new sounds and trying new things.

At this point, the Flaming Lips would almost seem to have more progeny than peers. A look at the last decade of indie rock would almost suggest that your music has been more influential to bands like MGMT, Tame Impala, and King Gizzard and the Lizard Wizard than the Velvet Underground, the Pixies, or the Stooges. How concerned are you with your legacy?

I mean, with those bands — especially MGMT and Tame Impala — we absolutely love them and I feel certain that they could have arrived at exactly the same music without the Flaming Lips ever existing. I think we've influenced each other, really. Their music influences us as well. It's not just us doing the influencing.

I never think of it in terms of legacy and stuff like that. I think I'm lucky that I can just be blissfully involved in doing the shit that I think is so important today, without ever really thinking about what is this going to mean in the big picture. Next year, "The Soft Bulletin" will be 20 years old, which is an insane amount of time, but when you're in your 50s, 20 years doesn't feel the same as it does when you're 20 years old.

I'm glad that [a legacy] kind of exists and gets written for you, whether you like it or not. And some of the things that I wouldn't have wanted to be known for when I was 20, I'm very glad to be known for them now. You know, if someone would have said, "Oh, your song 'Do You Realize' will be played at weddings and funerals for people's grandmothers," when I was 20, I would have said "Ahh, that's bullshit! Who wants that?" But when you actually get to be part of a thing like that. … I didn't necessarily want that to happen, but I didn't necessarily not want it to happen. It just sort of happened, and it's the greatest thing ever.

To be excited about what's happening today and the effect it's going to have on your friends and family and stuff tomorrow. … To me, that's enough.

Unicorns are mentioned in the King James Bible nine times. Skeptics claim that this was due to a mistranslation of the Hebrew word for an extinct species of ox, but I'm not convinced.

For me, the idea of unicorns and rainbows and these types of fantastical beings become more and more a way of connecting: It's so absurd and it's so fantastical and so colorful that its meaning is whatever you want it to be. And I think that's why we embrace it. Part of the idea of all these fantasy characters is that they're not any gender, they're not any race, they're not old or new, they're just these entities that kind of exist in your imagination, and they don't have to tie to any country or world or any time; they're free of being too identified. It's a realm of a nonjudgmental fantasy. And yeah, I mean. … If I had written the Bible, I would have definitely put unicorns in there. S

The Flaming Lips perform at the National on Saturday, March 10 at 8 p.m. Tickets cost $45 in advance, $48 the day of show. thenationalva.com.