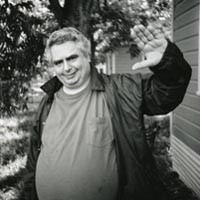 He's a diabetic, 47-year-old heavy smoker who suffers from severe manic depression that requires him to be heavily medicated and live next to his parents.

But singer-songwriter Daniel Johnston's career has never been better.

Celebrities wear his cartoon frog t-shirt, "Simpsons" creator Matt Groening calls him his favorite songwriter and big-name musicians such as Beck, Tom Waits and Eddie Vedder cover his songs. And the small cartoon drawings he used to give away now hang in museums around the world.

"I've watched the movie about 10 times and every time I see it, it's just hilarious," Johnston says, sounding like a gruff but sweet-natured kid via phone from Waller, Texas. "Now I'll be shopping at the grocery store and girls will be like, 'Hey, there's that guy from the movie.' So it's fun."

Raised in West Virginia, Johnston has been creating quirky, heartfelt songs, sung in his earnest high warble, his entire life. The best are instantly endearing for their emotional honesty and creative intensity, some with surreal titles like "Walking the Cow" and "Dead Dog Laughing in the Cloud," others just simple and moving, such as "True Love Will Find You in the End," as good an introduction as any to his work.

Self-taught on piano and guitar, Johnston says he learned to play by rearranging the Beatles' chord book. A big chunk of his catalog consists of love songs inspired by a fellow art student he secretly worshipped named Laurie Allen. The film's producers brought Allen to the premiere of the movie, included as a DVD extra.

"Oh, I could not believe it!" Johnston recalls. "I hadn't seen her in over 20 years. The girl I sang songs about, forever remembering, never thinking I would see her again -- and there she was. And she knew all the albums. She was ever more beautiful than ever. That was the real happy ending."

The film could've used one. Johnston has seen dark times, having been repeatedly committed to mental hospitals throughout his adult life.

Take the night, after headlining a sold-out concert, when he was returning home in a small plane flown by his father and manager, Bill Johnston, a former World War II fighter pilot. Off his meds, Daniel wrestled control of the plane, threw the key out the window and nose-dived the plane toward the ground. He believed he was Casper the Friendly Ghost.

His elderly father, who sobs at the memory during the film, regained control at the last second and ditched the plane in some heavy trees, destroying it, but miraculously saving them both from injury.

Never a viable commercial artist, Johnston has continued making music, even though his voice has grown rougher. He says he's especially enjoying writing new music with his latest band, Danny and The Nightmares, featuring younger musicians from Waller. They hope to release their rock album, "The Death of Satan," on Jello Biafra's Alternative Tentacles label, Johnston says.

"I'm so excited because this is going to be our best album," he says. "The girl that plays drums is really great."

He also plans to record again with Virginia musician Mark Linkous of Sparklehorse.

Johnston's family, mainly his father and brother, now handle his career. Johnston says his dad recently took him out for a surprise Chinese dinner.

"He said, 'We're going to celebrate, we're millionaires!' It was unreal," Johnston says. "It's so great to be a half-millionaire. After all those years of working at McDonald's, starving and slaving, and being in hospitals, we finally made it."

Bill Johnston, 87, who comes off heroically in the documentary for supporting his son through nonstop turmoil, says that Daniel may be overstating things a bit. He tells me that he bought back the copyright to Daniel's material from Gannon Records for $55,000, and there's a Hollywood film being negotiated with Universal. Target also recently used the song "Speeding Motorcycle" for a popular commercial.

"It was a tough 25 years bringing him along to where he's stable," says Bill, his voice cracking. "For five years now, he hasn't had to be in a hospital. But I'm making sure that when I'm gone, he'll have yearly income to live on for another 15 or 20 years. He won't starve to death."

A diabetic, Johnston says he wants to lose weight.

"I was so fat in the movie that I took up the whole stage," he says. "Now I've got an exercise bike in case I ever see Laurie again."

It seems that true love remains his greatest muse.

"I don't think about her through the day or when I draw pictures. But every time when I sit down at the piano, the first thing I know, I'm singing about her again.

"And now Laurie loves it."

Daniel Johnston performs solo at The National with special guests The Hymns Monday, June 23, at 8 p.m. Tickets are $15.