Food Review: The Betty on Davis gets the best things right. 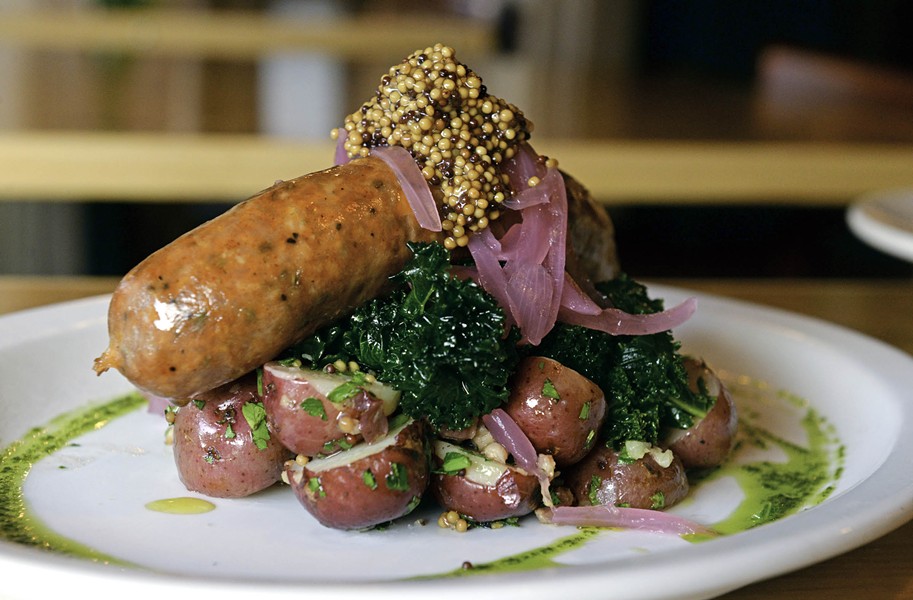 Every time I eat at the Betty on Davis, I wonder what Sonny Hutchins would think of its family-friendly, peach-walled wholesomeness. Hutchins, after all, was the lead-footed local NASCAR driver who operated a racing-themed bar there called the Hut. It was a place for his fellow members of the Strawberry Hill Mod Squad to hang out before the restaurant transitioned 15 years ago to the chef-driven Avenue 805.

In its latest iteration, three restaurant veterans have created an affordable neighborhood spot with blond wood booths, mirrored walls and pictures of assorted Bettys — Grable, Boop, Rubble — adorning the walls. Arrive early if you want to be able to hear your companion or the well-chosen music, because the Betty is loud, from its vocal youngest guests to a bar crowd that can get raucous. Attentive servers deal by leaning in.

Drinking local here means not drinking wine, although the usual Virginia beer suspects show up. It’ll be a proud day for Richmond restaurants when Virginia’s wineries are as well represented as the state’s breweries.

Chef Trevor Knotts chooses to focus on daily chalkboard specials to flesh out the simple menu and that allows him to walk a slightly more adventurous culinary path than just the bowl of simple pasta that I see multiple tables order.

A tasty meal can be made of not much more than the smoked chicken drumstick appetizer ($8.75) consisting of two meaty, dry-rubbed legs that get a boost from Cannon’s Pig Paint sauce, raw and pickled vegetables and blue cheese dressing. Because the preparation changes daily, I choose mussels ($9.95), curious about the combination of Sriracha, white wine, butter and cilantro, which my server assures me isn’t really hot. And it isn’t at first, but with two-and-a-half dozen mussels, the dish soon becomes fiery — not a problem for me, but it could be for my aunt when she’s expecting less spice. On a cold night, I opt for chili ($3/$5), thick with corn, beef and two kinds of beans, a mildly spicy, rib-sticking mixture that supports my spoon in the upright position.

Vegetarians won’t find anything new about the mixed green salad ($7.75), but the handsome marriage of baby greens, candied walnuts, goat cheese and strawberries in lemon-rosemary vinaigrette provides enough textural and flavor contrast to assuage any sense of sacrifice. Where the kitchen shines is with the ridiculously simple arugula salad ($5.75), a sublime plate of nothing more than arugula, a squirt of fresh lemon juice, quality extra virgin olive oil that has a hint of sweetness on the finish and a sprinkling of coarse gray salt. Add sautéed shrimp ($5) to feel virtuous and satisfied. A special of mushroom risotto ($15) is punctuated with earthy oyster, crimini and shiitake mushrooms, and colorful accents of grape tomatoes, in basil-and-pumpkin seed pesto. It’s a dish that even carnivores can get behind.

Made in house, the pastrami sandwich ($9.95) is a work in progress. Our server apologizes for oven issues. The meat needed more time to roast and should have been sliced far thinner than it was. The Betty is new, slicers can be costly and that might be a temporary trade-off. A crispy fried-chicken schnitzel sandwich ($7.75) is far more successful, topped with chayote and cabbage slaw, sporting pickled red onion, which is as ubiquitous on Richmond menus these days as beards on bikes.

Knotts shows off his sausage-making prowess with an entrée of appealingly coarse-textured smoked sausage, tasting of fennel and paprika, with warm German potato salad and sautéed kale ($15.75). Pickled mustard seed adds a pop of flavor to everything on the plate, although the kale is sautéed to toothsome perfection and needs no further enhancement. The potato salad varies from my first to my third visit, sometimes arriving with overly soft potatoes, other times short on vinegar.

Not that you should ever need a reason, but here are two to have dessert at the Betty: Knotts makes it here, and each rings up for a mere $5. Cinnamon puff with blackberry compote is warm and airy, while chocolate cream squares — layering mousse, cookie crumbs and whipped cream — come across surprisingly light. Fittingly, there’s also brown betty, the traditional fruit and crumb classic.

The Hut had its day, now it’s the Betty’s turn. I imagine Sonny Hutchins giving it a thumbs up. S